It was the feel-good victory of the year.

After retiring from Muay Thai in 2015 and beating cancer in late 2016, Singtongnoi Por Telakun made his highly-anticipated return to active competition at ONE: UNSTOPPABLE DREAMS on 18 May.

After defeating cancer, Singtongnoi Por Telakun debuts triumphantly in ONE Championship, scoring a TKO win at 2:36 of Round 2!

After defeating cancer, Singtongnoi Por Telakun debuts triumphantly in ONE Championship, scoring a TKO win at 2:36 of Round 2!Watch the full event LIVE & FREE on the ONE Super App ???? http://bit.ly/ONESuperApp | TV: Check local listings for global broadcast

Singtongnoi’s dominant display was remarkable, given the doubts some had about his decision to put on the gloves for a professional contest once again.

His cancer treatment took a lot out of the 37-year-old, and his parents were worried his body would not be able to take the stress of the preparation required for Muay Thai competition.

However, the Thai says that as soon as he was booked to compete, he resumed training as if he had never been away.

“I was very happy to come back to training. Once I got back in shape, it did not feel any different at all,” he explains.

“I felt strong and enjoyed training. It was good to be back training hard with my teammates at Evolve MMA after having to deal with cancer.” But, his feelings changed when it came time to walk out in front of a sold-out crowd at the Singapore Indoor Stadium.

It was a daunting prospect, but one that ended up adding fuel to the fire of a legend like Singtongnoi.

“I was very excited and felt a lot of pressure. It was my first bout back after beating cancer and I had not competed in a few years, so it was a huge fight for me. I felt the pressure to perform,” he admits.

“The reaction from the fans when I walked out was amazing. Hearing the crowd gave me tons of energy and motivated me to perform for them even more.”

Once the bout began, both competitors appeared to be chomping at the bit to put their hands on each other. Evidently, that worked in Singtongnoi’s favor. 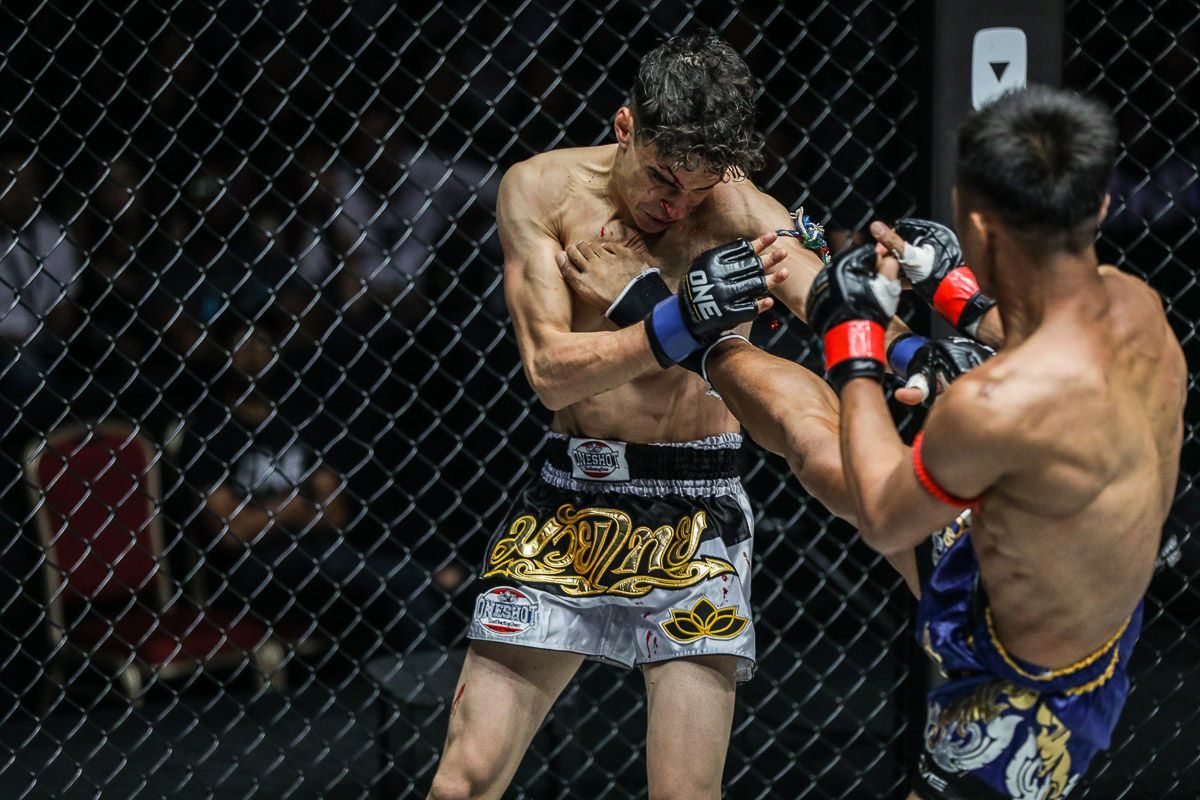 In the 301st contest of his unbelievable career, the Thai attacked with pressure, precision, and power. He forced Lasiri to move backward, and eat counter strikes when the WBC Muay Thai Super Bantamweight World Champion dared to push back.

Although the courageous Italian refused to quit — despite suffering dumps, knockdowns, and damage from strikes – the referee was forced to stop the match at 2:36 of round two.

“I was extremely excited and could not wait to get going. I felt that I performed pretty well,” Singtongnoi says.

“I was happy with my performance, and to get the finish in this first bout back after beating cancer. I know that I will perform even better in my next bout.” 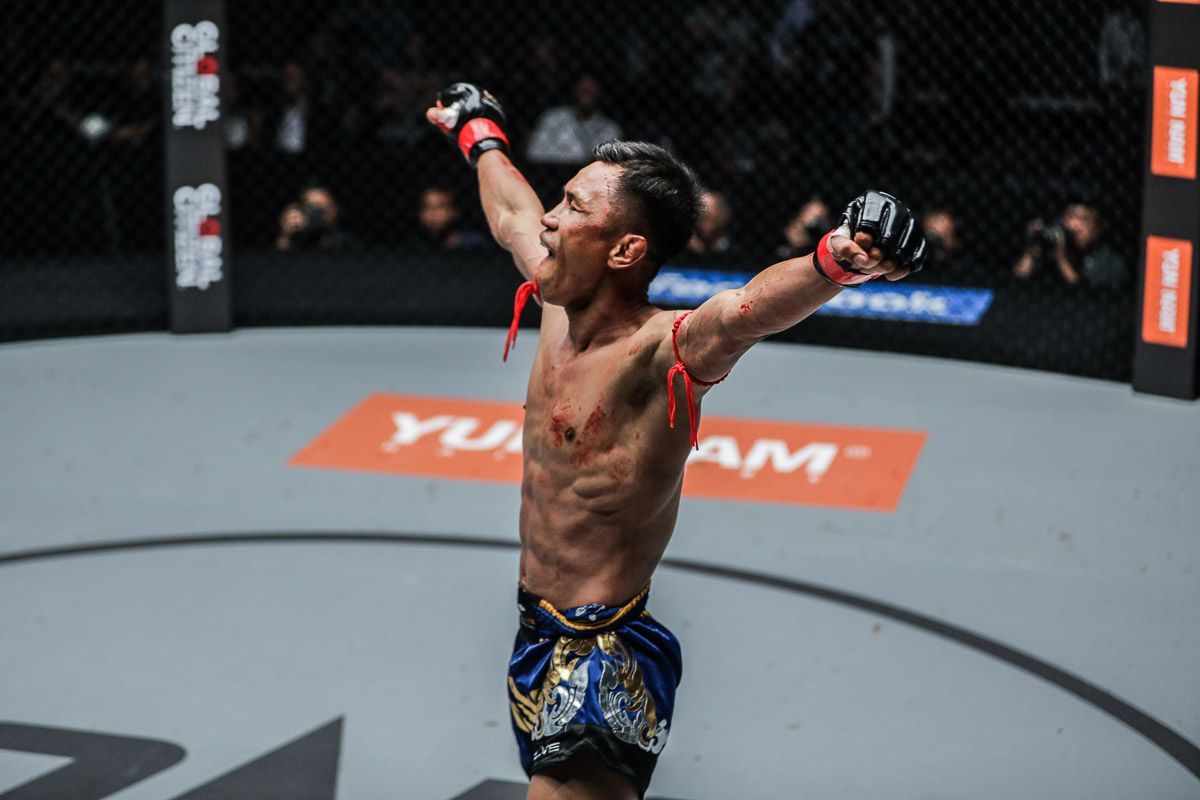 Among the thousands inside Singapore Indoor Stadium, there were a few people in attendance who made the occasion extra special for Singtongnoi.

First, there was the team of fellow Thai legends and world champions who supported him through his training camp — and shouted advice from his corner.

There was also his family, some of whom traveled from his home country to see his return live in the flesh.

“I am very thankful for all the support I get from Evolve MMA. All the world champions helped me prepare for this bout, and having them giving me advice during the bout really helped,” he says.

“It was very special for my family to be there watching me compete [too]. Not long ago, when I was battling cancer, it did not look like a possibility at all.” 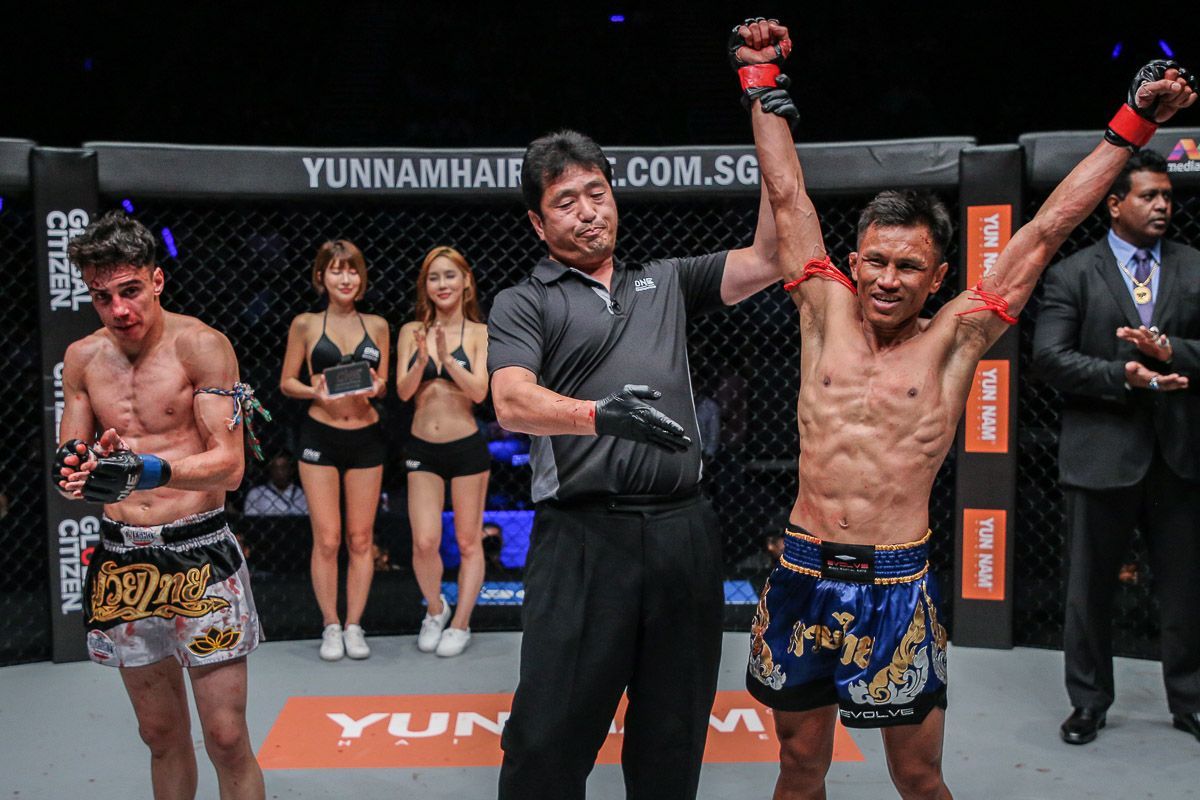 A successful comeback like that might have been enough for some men, who would have felt content proving their warrior spirit was still alive following a life-threatening illness.

Singtongnoi, however, wants something more, and he is committed to continuing his career revival.

Despite all his achievements, the platform offered by ONE to showcase his skills to the world is unprecedented – and he wants to enjoy the experience again, all while adding to his 221-80 record.

“I have performed at the top of Muay Thai in all the top stadiums, but competing in ONE is different, as a global audience now gets to see me. I cannot wait to compete for ONE as soon as possible,” he says.

“Like all other athletes in ONE, I would love the opportunity to compete for a World Title. I want to compete as soon as possible and keep winning.”