Reigning ONE Strawweight World Champion Yoshitaka “Nobita” Naito walks to the cage decked out in an outfit patterned after his namesake from the Japanese series, Doraemon.

His “Nobita” moniker came about after one of his training partners pointed out the resemblance between him and the character, and Naito has embraced the persona fully.

Comic books and anime have been a big part of Naito’s life. The 34-year-old from Matsudo, Japan has been an avid reader of comic books from all genres since childhood, and he has maintained his passion as an adult.

As anyone who has grown up in Japan can attest, comic books are accessible forms of entertainment for everyone. Many are sold for as little as 80 yen (less than USD$1).

Manga is widely recognized as a uniquely Japanese cultural export and a familiar presence in everyday life. Comic book or anime-inspired characters can be found in everything from children’s books to public service announcements and promotions sponsored by the tourism board.

Like countless other boys who have grown up in this environment, Naito naturally came to enjoy reading comic books – especially adventure, mystery, and sports-themed titles. Some of his favorites include Slam Dunk and Hunter x Hunter.

He was captivated by the imaginative visuals and narratives of the manga. For an introverted, socially-awkward youth, it offered a retreat from the anxiety of social interaction in his day-to-day life.

“Manga offered a form of escape from reality,” he says.

“I knew that avoiding the discomfort of facing reality was not advisable, but I did not enjoy school at all because I disliked schoolwork and had few friends. I felt helpless. I was unable to improve my circumstance and needed a mental sanctuary to retreat to.”

While manga is sometimes seen as an object of subculture and the zany obsession typified by anime festivals and cosplay gatherings, for Naito, it offered a feeling of comfort.

The imaginative world portrayed in manga provided the excitement and exhilaration that eluded him in real life. He even draws an interesting parallel between manga and mixed martial arts.

“I like how imaginative the visual and narration of manga are,” he begins. “I see something similar with mixed martial arts because fighters I admire, like Kazushi Sakuraba, are very imaginative with their techniques and fighting styles.”

Ever wondered why Yoshitaka Naito enters the arena as "Nobita" from Doraemon?

Although he is now the reigning two-time ONE Strawweight World Champion and has overcome much of his social anxiety, he still enjoys reading manga.

Just like his moniker, comic book geekiness is a part of his persona – not only in Japan, but also in other Asian countries where he has competed under the ONE Championship banner.

The popularity of manga in many East and Southeast Asian nations, as well as the familiarity with which many fans in those countries have with Doraemon, has been a curious boon for Naito.

“Since I do not understand the languages spoken outside of Japan, I do not know what exactly fans make of my ‘Nobita’ persona,” he explains.

“Having said that, I feel a degree of receptivity toward me, so even when I fight in those countries for the first time, I feel that it is not a complete ‘away’ game.”

An epic rematch between ONE Strawweight World Champion Yoshitaka Naito & Filipino superstar Joshua Pacio headlines ONE: CONQUEST OF HEROES in Jakarta! Plus, hometown hero Stefer Rahardian will be in action!

An epic rematch between ONE Strawweight World Champion Yoshitaka Naito & Filipino superstar Joshua Pacio headlines ONE: CONQUEST OF HEROES in Jakarta! Plus, hometown hero Stefer Rahardian will be in action!Jakarta | 22 September | LIVE and FREE on the ONE Super App: http://bit.ly/ONESuperApp | TV: Check local listings for global broadcast | Tickets: http://bit.ly/oneconquest18

Posted by ONE Championship on Tuesday, August 28, 2018

There will undoubtedly be fans at the Jakarta Convention Center excited to see the Japanese sensation walk out fully dressed in “Nobita” garb, when he meets Joshua “The Passion” Pacio in the main event of ONE: CONQUEST OF HEROES this coming Saturday, 22 September.

While manga offered Naito an escape from reality during his adolescence, it has become a crucial piece of his adulthood, as it serves as a connection between him and his fans.

Also, it has become a unique commonality tying together his past life as a struggling soul and current life as a World Champion in a single thread. 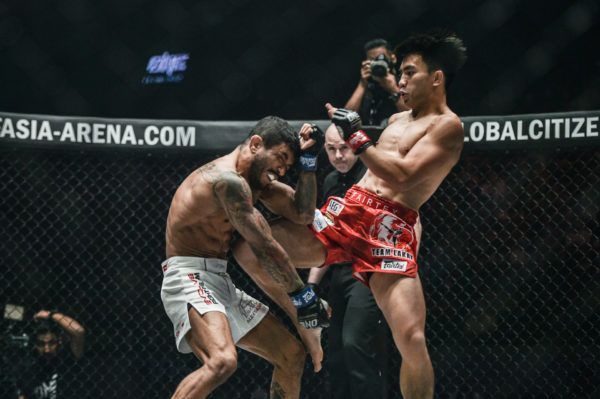