Xiong Jing Nan (14-1) is a formidable test for any athlete. “The Panda” has looked incredible so far in her ONE Championship career with two dominant promotional wins by knockout.

First, she took out the Philippines’ April Osenio via KO in the first round of their December clash. For her second act, she tore through Tiffany “No Chill” Teo on the way to a fourth-round stoppage a month later.

The latter earned her the honor of becoming the inaugural ONE Women’s Strawweight World Champion, the first Chinese mixed martial arts world champion, and the very best female strawweight in the world.

The 30-year-old Beijing, China native is a fearsome prospect for any opponent. But on Saturday, 23 June, Argentina’s Laura “La Gladiadora” Balin (10-2) will have to find some way to overcome her at ONE: PINNACLE OF POWER.

It will not be easy, but here are four reasons why she could snag a historic victory in Macau.

Xiong’s most dangerous weapons are undoubtedly her hands. Both Osenio and Teo found out that it is a bad idea to stand in the pocket and exchange punches with her.

The World Champion hits hard, and both athletes failed to withstand the power of “The Panda.”

Balin will need to avoid getting into a firefight too, but that does not mean she cannot find any success with her boxing, just like she did in her four knockout wins to date.

If there is an element of Xiong’s boxing to be exploited, then it may be her tendency to throw hooks. She even leads combinations with bent-arm shots that loop in from the side.

The Argentinian’s kickboxing education has undoubtedly put an emphasis on crisp, straight punching. If she can connect with shots down the middle, then she has the potential to stop Xiong’s combinations before they can build momentum.

Preparing for her World Championship bout is a family affair for Laura Balin.

Preparing for her World Championship bout is a family affair for Laura Balin.Macau | 23 June | LIVE and FREE on the ONE Super App: http://bit.ly/ONESuperApp | TV: Check local listings for global broadcast | Tickets: http://bit.ly/onepower18

Posted by ONE Championship on Friday, June 8, 2018

Another path to disrupting the Chinese World Champion’s overwhelming boxing could involve a strategy of blunting it indirectly.

Balin could accomplish that by unleashing the low kicks from her kickboxing arsenal. These strikes, combined with good head movement, could act as an effective counter to Xiong’s immense punching ability.

If “La Gladiadora” can land frequently, with power, and throughout the contest, then the accumulated damage could be key.

With her legs weakened, “The Panda” may lose some of the explosiveness needed to move into range and land her best shots, thus giving Balin an opening to land her own.

#3 Taking It To The Ground

Both of Xiong’s previous opponents’ strengths have played into her own.

Osenio’s wushu base and Teo’s boxing background were an ideal foil for the ONE Women’s Strawweight World Champion, who was more than happy to stand and trade with them.

Balin represents arguably the toughest test she has faced on the ground so far.

Although “La Gladiadora” does not own a distinct advantage on the ground, she may at least be a match for Xiong, with five submission wins to her name.

It is true that Balin will have to cross the Pacific to a foreign continent to face the world champion at the Studio City Event Center.

For some, that would be a daunting task, but it could work in the challenger’s favor. After all, the weight of expectations is off her shoulders.

As the World Champion, known to fans in Asia for her dynamic performances in the ONE cage so far, great things are expected from Xiong.

Balin, on the other hand, will be introducing herself to a global audience for the first time. Her slate is clean, which could allow her to relax. It could also give her the freedom rise to the occasion and put on the best performance of her career.

If she can do that, the 38-year-old just might leave Macau as the new ONE Women’s Strawweight World Champion. 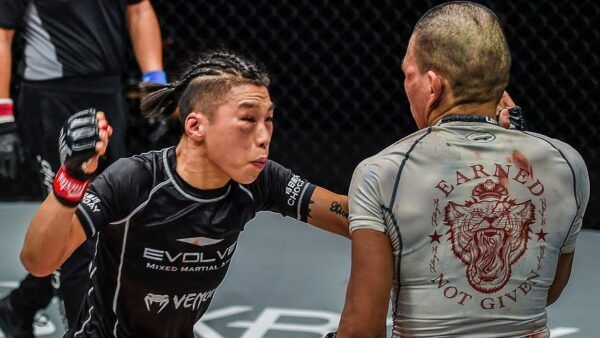