Colbey Northcutt joined her brother, “Super” Sage Northcutt, in ONE Championship last year, and, just like her younger sibling, she has big goals she wants to achieve.

In November, she made a successful promotional debut at ONE: EDGE OF GREATNESS, where she displayed both her extraordinary striking and submission prowess.

The 27-year-old Katy, Texas native took a massive step forward in her quest to become a ONE World Champion, but winning the belt is not enough. There is another milestone she wants to achieve, which is to become the second brother-sister duo to claim gold in The Home Of Martial Arts.

With so many elite athletes competing in the world’s largest martial arts organization, that will undoubtedly be a difficult task. However, Northcutt and her younger sibling are up for the challenge.

After all, they were Karate World Champions during their childhood, and the chance to repeat the feat in mixed martial arts in their adulthood is an exciting prospect to them.

Now, take this opportunity to learn more about Northcutt and her incredible martial arts journey.

Happy birthday to my awesome brother @supersagenorthcutt ???? Here’s a little throwback to before he started spiking up his hair ???? #23

Martial arts is in Northcutt’s blood. Her dad, Mark, is a black belt in shuri-ryu karate, and he got his children involved in the family business as soon as they were old enough to begin training.

She started learning under her father’s tutelage at 7 years old while her brother, Sage, followed closely behind when he was 4.

The female prodigy quickly proved to be a natural in sport karate and kickboxing, and she put her skills to the test. She traveled with her parents and siblings across the globe to compete against the best youth martial artists on the planet.

“That’s pretty much all we did. We were very fortunate and very blessed to have parents that spent all of their time and money on us competing and traveling all over the world,” she says.

“We competed in tournaments everywhere from Russia, to Ireland, to Croatia, to Italy – everywhere they could think of to take us to. We didn’t have a typical childhood where we got to go hang out with our friends on the weekend and go to parties and things like that.

“We were training, we were competing on the weekends, and we were with each other – it was a lot of fun.”

A little Sunday motivation for the beginning of a new week ???? #wmma

Because she spent so much time training and competing, Northcutt did not have a traditional maturation from adolescence into adulthood.

She did not get to enjoy many of the typical exploits of a high school student in the United States – including her prom – because she was always so focused on martial arts, as well as her education.

“I look back sometimes like, ‘What would that have been like?’ I was in Mexico and I was competing in a tournament,” the Texas native explains.

“I wouldn’t change all of those things, and I’m super, super grateful we didn’t have that normal childhood that everybody has growing up.”

Once she graduated high school, Northcutt was faced with a tough decision. At the time, women did not have the same opportunities in combat sports as men, so she decided to focus on college – though martial arts remained a big part of her life.

“When I was 18, I just graduated high school, and I was contemplating going to college or fighting professionally,” she explains.

“At the time, women weren’t making a lot of money, so I didn’t know if I could make a career out of it or if I needed to go to school. I spent the next few years having some amateur fights and training a whole lot. I did end up going back to school for a few years and I did get my degree.

“I always wanted to be a professional fighter, but in the beginning, I had that uncertainty if I could make enough money doing it. Fast forward now and everything we can do is just amazing.”

While her brother entered the professional ranks and began competing at the highest levels of the sport at the same time as he studied, Northcutt took a different path. Eventually, she was able to live out the same dream once she turned her attention to mixed martial arts full-time.

Following a successful career in sport karate, as well as a successful run in amateur mixed martial arts, Northcutt entered the sport‘s professional ranks in June 2017.

Her career did not start the way she wanted it to, however. She suffered a rare loss via second-round TKO.

It was a result that made her question her future in the sport, but in the end, it strengthened her resolve.

“My first professional loss, that would definitely be the most difficult moment for me [in martial arts],” Northcutt admits.

“It kind of made me sit back and reflect on what I was doing wrong and what can I do to improve. Obviously, I know it was my first fight, but it was like, ‘Do I really want to do this?’

“I never wanted to feel like that again, so I was going to make a change. I’m really, really happy that it happened. I wasn’t happy at the time that it happened, but now, I’m very grateful for it.”

The changes she made included a move from Texas to California, where she began training under a new set of coaches – including well-respected veteran and head coach, Mark Munoz – at the Treigning Lab.

With a change in scenery and some time away from competition, Northcutt felt re-energized. 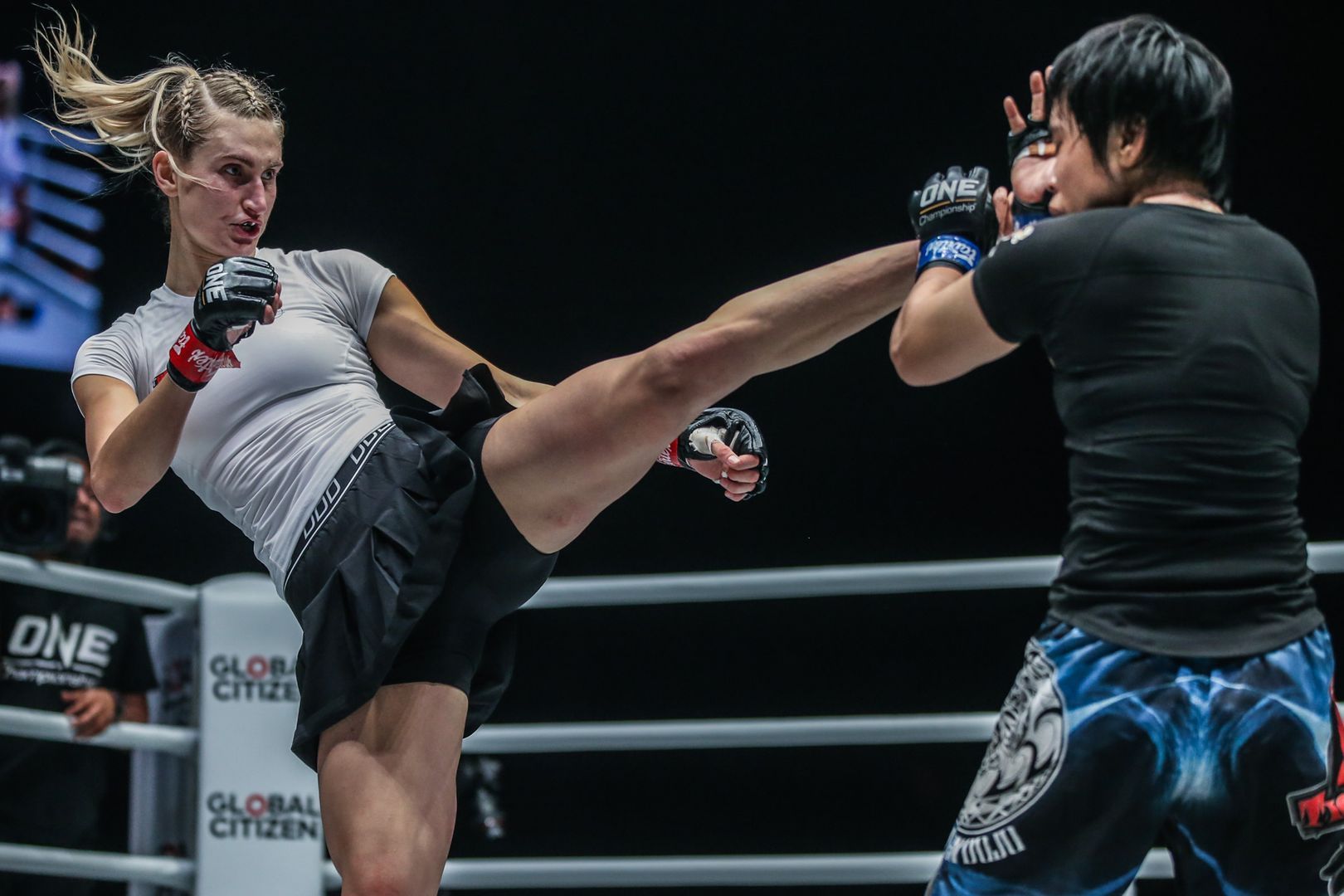 After nearly two and a half years away from the sport, Northcutt returned to competition and made an immediate splash.

In November 2019, the American made her promotional debut at ONE: EDGE OF GREATNESS in Singapore, where she dominated Putri “Ami” Padmi from start to finish.

Northcutt stunned the Indonesian flyweight with a short right hand in the opening stanza, and then she nearly submitted her opponent with a guillotine choke, a triangle choke, and an armbar. “Ami,” however, hung tough to escape the danger.

The Texas native would lean on her versatile punches and kicks in the final two rounds to wrap-up a clear unanimous decision victory and start her ONE Championship tenure on the right foot.

“It couldn’t have gone any better than it did,” she says.

“Obviously, I would’ve loved to have gotten the finish, but that was the first time I had ever gone the full 15 minutes. And, after two and a half years off, I felt fantastic. It could not have gone any better, and I feel great. I’m very happy about my performance.”

Northcutt plans to build off her momentum in the coming months, and she expects to be much more active now that she is in The Home Of Martial Arts.

In fact, she would love nothing more than to reach the pinnacle of the sport with her brother right by her side.

The two did it during their childhood in sport karate, and she believes it would be a nice touch to repeat the feat in their adulthood.

“ONE Championship has Angela and Christian Lee, and they are brother and sister. We’re the second brother-sister duo in the league,” she explains. “I think to be able to fight alongside Sage would be a dream come true for both of us.”