Four-time Muay Thai and Kickboxing Heavyweight World Champion Alain “The Panther” Ngalani is one of the most exciting athletes on the ONE Championship roster.

The Hong Kong resident has put on thrilling performances ever since his professional debut in September 2013. Also, he has proven to be just as entertaining outside of the cage, with his friendly personality and fresh dance moves alluring fans all across the globe.

It has been a thrilling five years for the Cameroon-born striker, who has had plenty of twists and turns on the way, but is never without a smile. That is because he truly loves martial arts, and cherishes every opportunity he gets to showcase his skills and captivate crowds.

Here are three of his favorite moments from his time in the Home of Martial Arts. 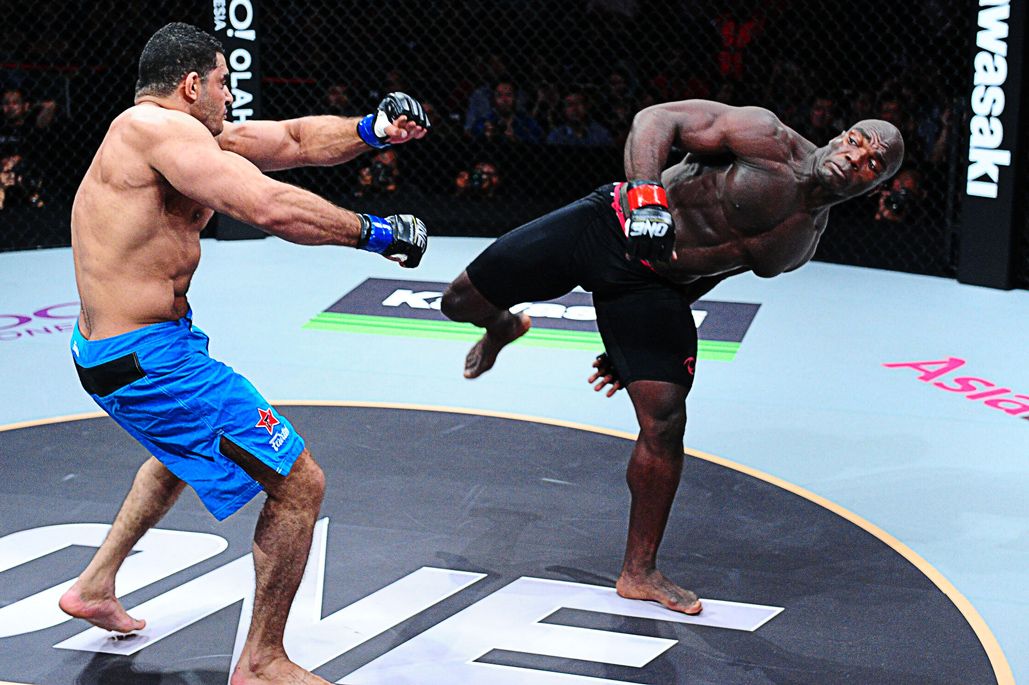 After many years of success in the worlds of Muay Thai and kickboxing, “The Panther” set his sights on mixed martial arts.

In September 2013, Ngalani made his official debut at ONE: CHAMPIONS & WARRIORS. He  faced Egypt’s Mahmoud Hassan before a capacity crowd inside the Istora Senayan in Jakarta, Indonesia.

“I had no pressure. I was just happy to come and have some fun,” the 43-year-old recalls.

“It was my first pro mixed martial arts bout, my first time in ONE, and my first win, so it was really memorable for me.”

Just 31 seconds into the heavyweight contest, Ngalani showed why he had become such a superstar in the stand-up world, and why he had the potential to build a legacy in the cage.

As Hassan lunged forward with punches, “The Panther” launched into a spinning heel kick that landed right on the temple, which sent his foe tumbling to the mat. The Hong Kong resident sealed the victory with some follow-up punches on the ground.

“I landed my kick very quickly, and it was just beautiful,” he beams.

If you want to be a champion, have a champion attitude and hang with champions.Gratitude is the right attitude with OneChampionship

Posted by Alain 'The Panther' Ngalani on Saturday, January 27, 2018

Ngalani has proven to be exceptionally popular with ONE fans on his travels throughout Asia, and his bouts always generate high amounts of interest.

In January, that led to an invite to the ONE Elite Retreat, where many of the promotion’s top stars converged at the Shangri-La Resort & Spa in Boracay for a weekend of education, information, and fun.

“The retreat was my favorite moment,” he says. “It was fantastic. It gave me a different image of the company, and they looked after us so well.”

Often, athletes meet in tense backstage corridors or changing rooms during the promotion’s live events. While there is always respect, Ngalani admits it was good to get to know his peers outside of these high-pressure scenarios.

“Just to be around the other guys without the emotion of event night, where everything is so crazy, it was great,” he continues.

“We got to know each other, had a good time, and had some fun in a different environment.”

Finding yourself around like-minded individuals who share your passion is sometimes rare, but the elite martial artists in ONE have a lot of common ground.

Through his martial arts experiences, “The Panther” has been fortunate to make some new friends for life, and that is something he treasures above anything else.

“I have met lots of really nice people and developed friendships, which is awesome,” he says. “I have made some good friends like Martin Nguyen, Eduard Folayang, and Angela Lee.”

Sometimes, the sports world can be very unforgiving, especially when other athletes are willing to do anything to get ahead of the pack.

However, ONE’s ethos attracts world-class athletes who possess deep-rooted core values, such as humility, compassion, and respect. That makes it much more than a business to those who are involved with the organization.

“ONE is like a family to me,” he explains.

“I am very pleased to be with them, and I think being with friends — and such a nice crew and team — motivates you to stick around. I would not go anywhere else.”