Unlike her previous performance, “The Panda” Xiong Jing Nan was happy with the way she defended her ONE Women’s Strawweight World Title at ONE: BEYOND THE HORIZON.

The Chinese superstar scored a third-round TKO of Samara “Marituba” Santos in Shanghai, China, on 8 September. In doing so, she recorded the second defense of her World Title, and her fourth win in the organization.

“I’m happy with the win, but I still see a lot of room for improvement. I will work hard to improve and defend my World Title again,” she told ONE Championship commentator Michael Schiavello after the match.

It was a dominant performance by the 30-year-old, who was only seriously threatened when Santos took her back in round one.

By the time those first five minutes were over, however, “The Panda” had reversed the position and spent an extended period in top position, raining down punches and elbows on her opponent.

The finish came several minutes later, as the Brazilian signaled she could no longer continue following a standing hammerfist from Xiong.

The Chinese star believes the decisive blow was a strike many people may have missed on first viewing – a spinning back-kick to the body.

Xiong Jing Nan dominantly finishes Samara Santos at 1:22 of Round 3 to retain her ONE Strawweight World Championship!

Xiong Jing Nan dominantly finishes Samara Santos at 1:22 of Round 3 to retain her ONE Strawweight World Championship!TV: Check local listings for global broadcast

She told the international media during the post-bout press conference at the Baoshan Arena she was proud of the way she put that technique into practice on the biggest stage.

“I am most pleased with my spinning back kicks,” she explained.

“I am a kickboxer who only started mixed martial arts two years ago. I am just happy that I am improving every day.”

Xiong’s next World Title defense is set to be against ONE Women’s Atomweight World Champion “Unstoppable” Angela Lee at ONE: HEART OF THE LION in Singapore.

That assignment will be on 9 November, and a World Champion versus World Champion super-match in just eight weeks’ time is a prospect “The Panza” is eagerly looking forward to. 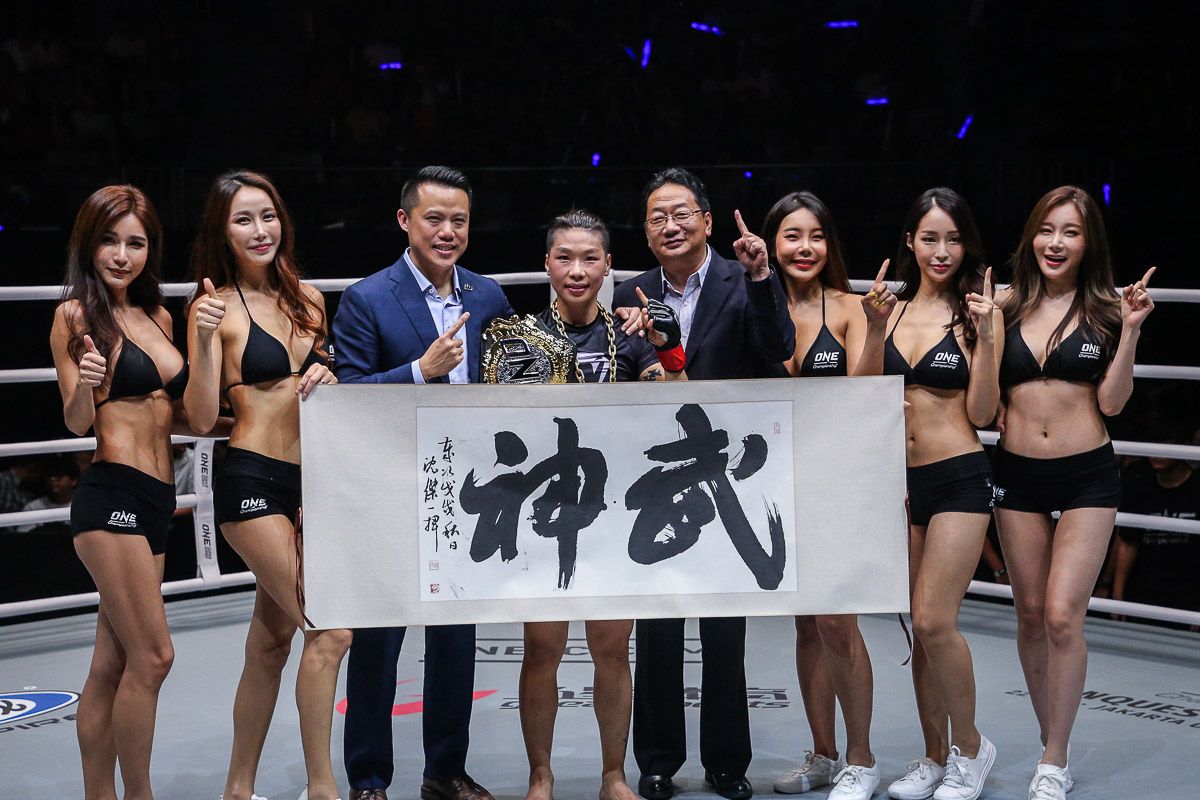 “I’m excited and look forward to meeting her. Facing a martial artist of her caliber is a great opportunity to put my skills to the test,” she told Schiavello.

“I’ll work hard to improve so I can secure the win, keep my World Title, and remain World Champion.”

Xiong is also supremely confident ahead of facing the most dominant women’s martial artist in ONE Championship history.

When asked what her prediction for victory was, her answer was an emphatic: “KO!”