Fresh off the biggest moment of her career, Mei “V.V.” Yamaguchi believes that one more win will be enough to seal her status as the number one contender for the ONE Women’s Atomweight World Title.

The Japanese mixed martial arts pioneer says there is no tougher contender in her division besides her opponent at ONE: ENTER THE DRAGON – China’s Meng Bo – and a victory will show she deserves another chance to claim the gold.

Yamaguchi is still bursting with enthusiasm in the aftermath of her last triumph in ONE Championship.

Ever since she first joined the world’s largest martial arts organization, she had dreamed of the day she could return home and compete in front of her Japanese fans, and that finally happened at ONE: A NEW ERA in March.

At the famous Ryogoku Kokugikan in Tokyo, The DEEP Jewels Featherweight Champion got the chance to perform in front of friends and family for the first time in years and claimed an impressive submission victory against Kseniya Lachkova.

Though she has competed for World Titles in main events of some of The Home Of Martial Arts’ biggest shows, Yamaguchi says the ovation she received from her supporters in her hometown was like nothing she has ever experienced before.

“ONE Championship has built a lot of history, it grew really big, and then they came to Japan. It’s a totally different thing than any other event I ever fought in before. I think the Japanese fans really enjoyed it.”

Hometown hero Mei Yamaguchi overcomes a tough start and submits Kseniya Lachkova with a slick armbar at 3:18 of Round 3! ????????

Hometown hero Mei Yamaguchi overcomes a tough start and submits Kseniya Lachkova with a slick armbar at 3:18 of Round 3! ????????Watch the full event on the ONE Super App ???? http://bit.ly/ONESuperApp | TV: Check local listings for global broadcast

The noise level was high when Yamaguchi entered the arena, and then went through the roof as she survived some tough moments, and came back to grab the finish in the final round.

“V.V.” admits it was something she was determined to achieve, and she took some risks she may not have otherwise because of the occasion.

“Girls have really flexible arms, so maybe in a different place or a different event, I might not go for that submission because there’s a lot of risk that the opponent will slide out – or even if I got the arm, they won’t tap that easily,” Yamaguchi explains.

“I heard the crowd yelling my name and cheering for me, so I thought, ‘I have to finish, I have to go for this.’ I came out with this result, and it made me very happy.”

As much as she enjoyed that moment, Yamaguchi soon turned her attention toward her next challenge. 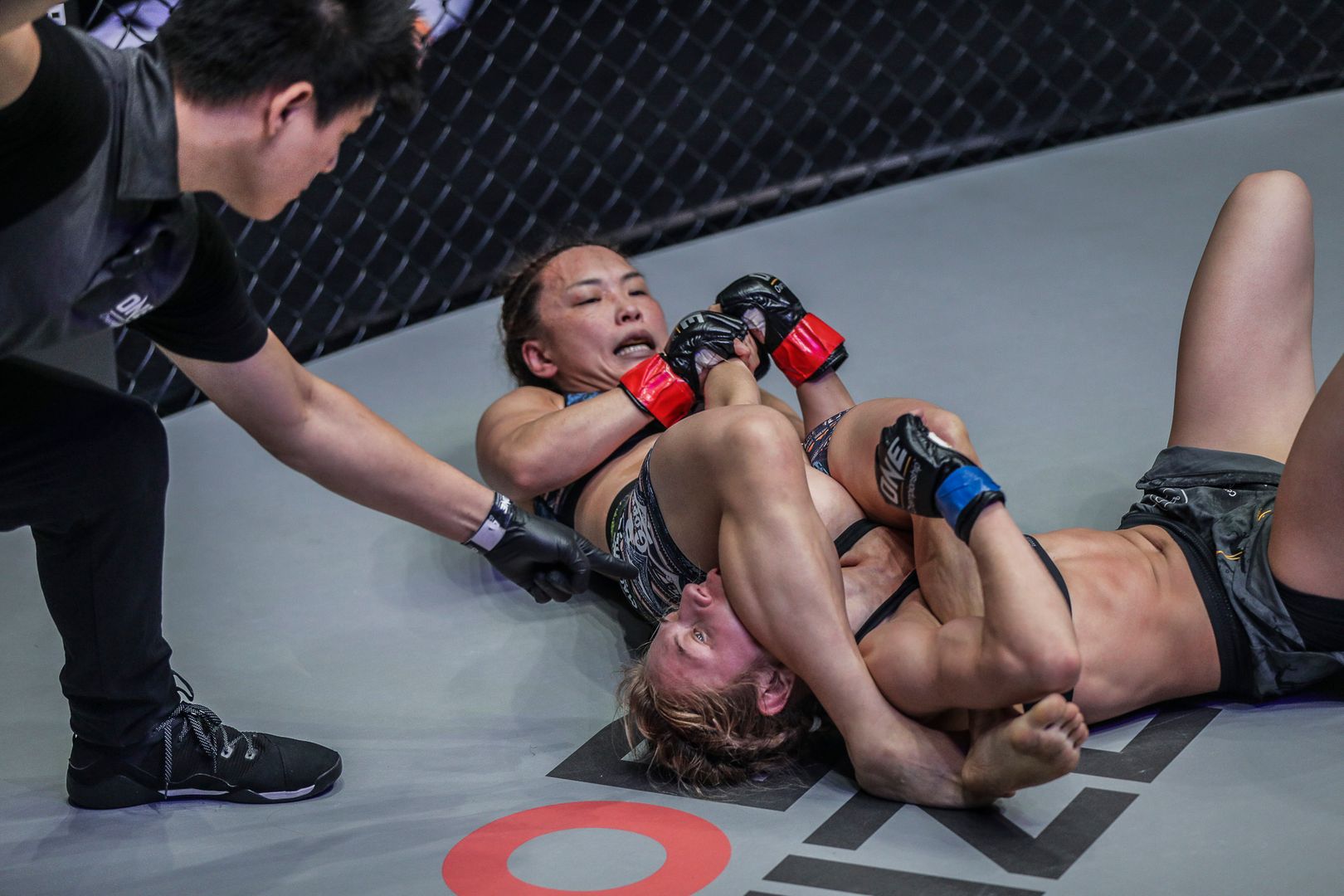 In Meng, she will take on an opponent she was scheduled to face in February before the Chinese athlete had to withdraw due to a serious foot injury.

Now that she is healthy again, the match was remade, and the 36-year-old thinks she will face a serious test of her skills.

The Northeastern Tiger Boxing Club may be a ONE newcomer, but she is a two-time mixed martial arts champion in her homeland with an impressive 13-5 record.

“I think she might be the hardest opponent [at atomweight] besides Angela Lee because, physically, she’s very strong, she has really good striking, and she’s very aggressive,” Yamaguchi says.

“I think this will be a pretty hard fight, but I think I should take it. I’ll take it as a test to challenge for the atomweight World Title again.”

To give herself the best chance of getting the call to compete for the belt again, the Japanese hero is convinced that she needs to do more than get her hand raised – she needs to win in style.

That is why she has planned to be entertaining, dominate, and hopefully, walk out of the ring with another finish on her record. 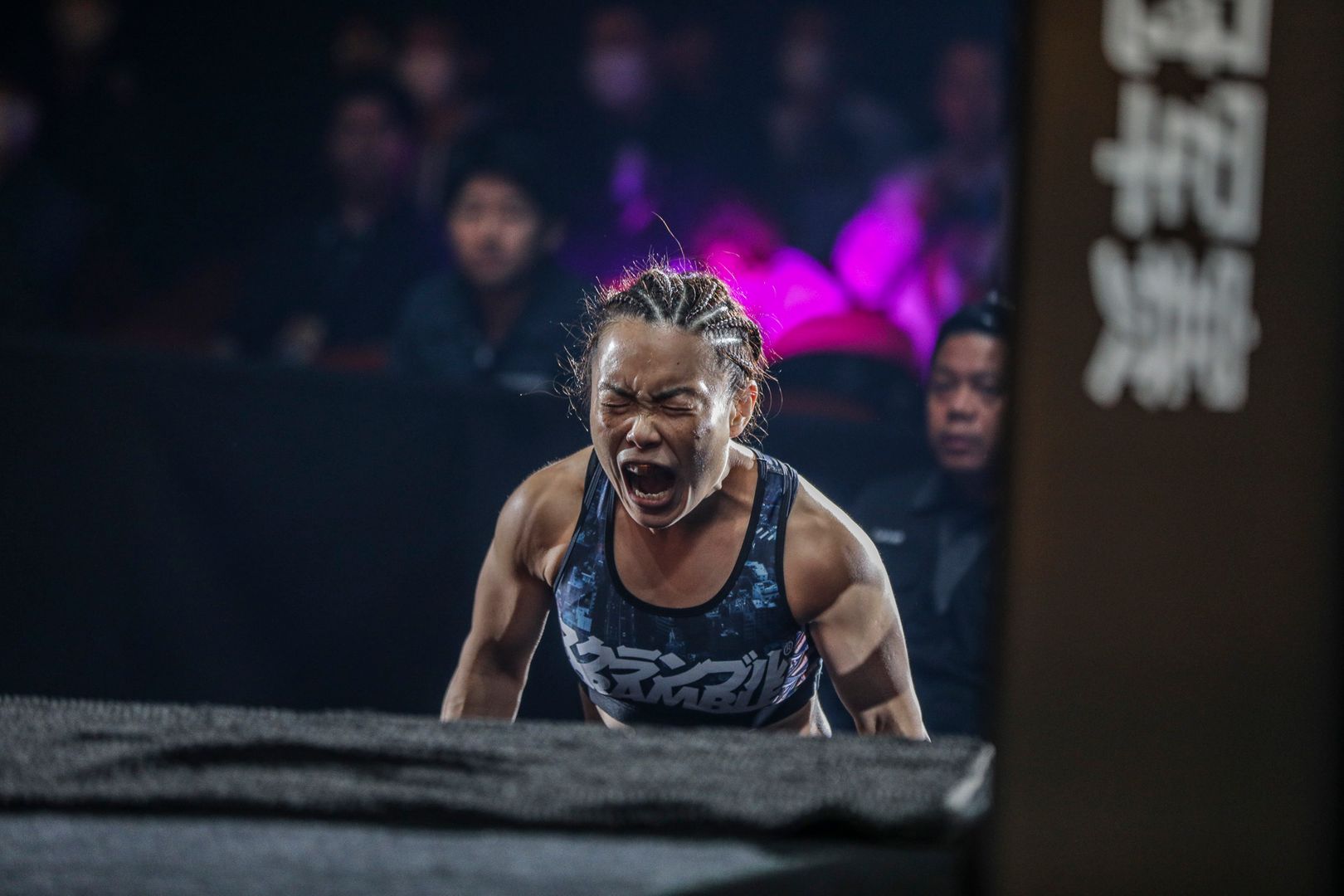 “Hopefully, I can take her down and go for a submission,” Yamaguchi says.

“I think if I win against Meng Bo, I have three wins in a row. I hope it won’t be a problem to challenge for the World Title.”

Though Meng is the only opponent on Yamaguchi’s mind right now, she cannot help but look ahead at a potential World Title shot later this year.

And given the boost she gained from competing in Tokyo in March – and the fact she has faced Lee twice in her native Singapore – there is only one place she wants to take on the biggest bout of her career.

“Hopefully I can fight in my hometown and show my power to all the Japanese fans,” Yamaguchi says.

“All my teammates, fans, and family are there, they always support me, and I really hope I can show everything [I can do].”