Even among all the great performances at ONE: FIRE & FURY, there was arguably none more spectacular than Lito “Thunder Kid” Adiwang’s.

On Friday, 31 January, the rising star from Team Lakay scored his second straight first-round finish when he submitted Pongsiri “The Smiling Assassin” Mitsatit with a kimura in Manila, Philippines.

The match could hardly have gone better for Adiwang after he showed his dominance in all areas of mixed martial arts.

In fact, before he finished the Thai athlete off on the ground, Adiwang came close to an even quicker TKO when he connected with a blistering salvo of strikes. It was only Mitsatit’s incredible heart and determination that allowed him to survive, and then threaten the Filipino the ground.

“To be honest, I was surprised with his toughness,” Adiwang admits.

“He is far from a pushover. I hit him with everything early on but he was able to recover rather quickly.”

Mitsatit’s ability to endure and then adjust forced “Thunder Kid” to adapt and react quickly. Within seconds of his back being taken, the 26-year-old from Benguet maneuvered out of a tricky spot to surprise his opponent with an opportunistic submission.

Because he did not panic, he was always thinking one step ahead of his opponent, and that is why he got the result he is so pleased about.

“What makes me really happy is how I was able to get the finish, deliver the victory to our fans and implement the game plan without taking any damage. I am really happy about that,” Adiwang says.

“More so than my conditioning physically, one thing that I liked about it is how sharp I was in the Circle. I believe that no matter how ready you are physically, if you aren’t mentally ready to follow a game plan, that will all be for naught.

Adiwang is now 2-0 in The Home Of Martial Arts, and it has only taken him four minutes and 59 seconds in total to do it. He is also now riding a seven-bout winning streak overall after he bulldozed his way through the competition in ONE Warrior Series before he reached the global stage.

Though he is still relatively new to the highest level of competition, his results show that he is capable of doing something special almost every time he steps into the Circle, and for that reason, he believes he has earned the right to take the next step up in competition.

If he gets that chance, “Thunder Kid” assures the fans he will be ready to rise to the challenge.

“Now it’s all about improving myself. I’ll be better than today, better than yesterday, and keep moving forward so I can always put on a good show and give an exciting fight,” he adds.

“I want to challenge myself. I don’t want a stepping stone. I want the top-calibers and top champions. That’s who I want to test.” 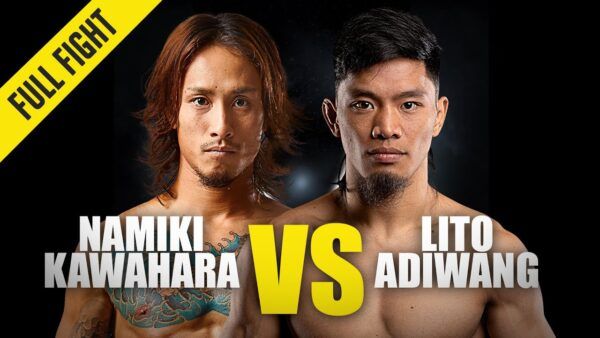