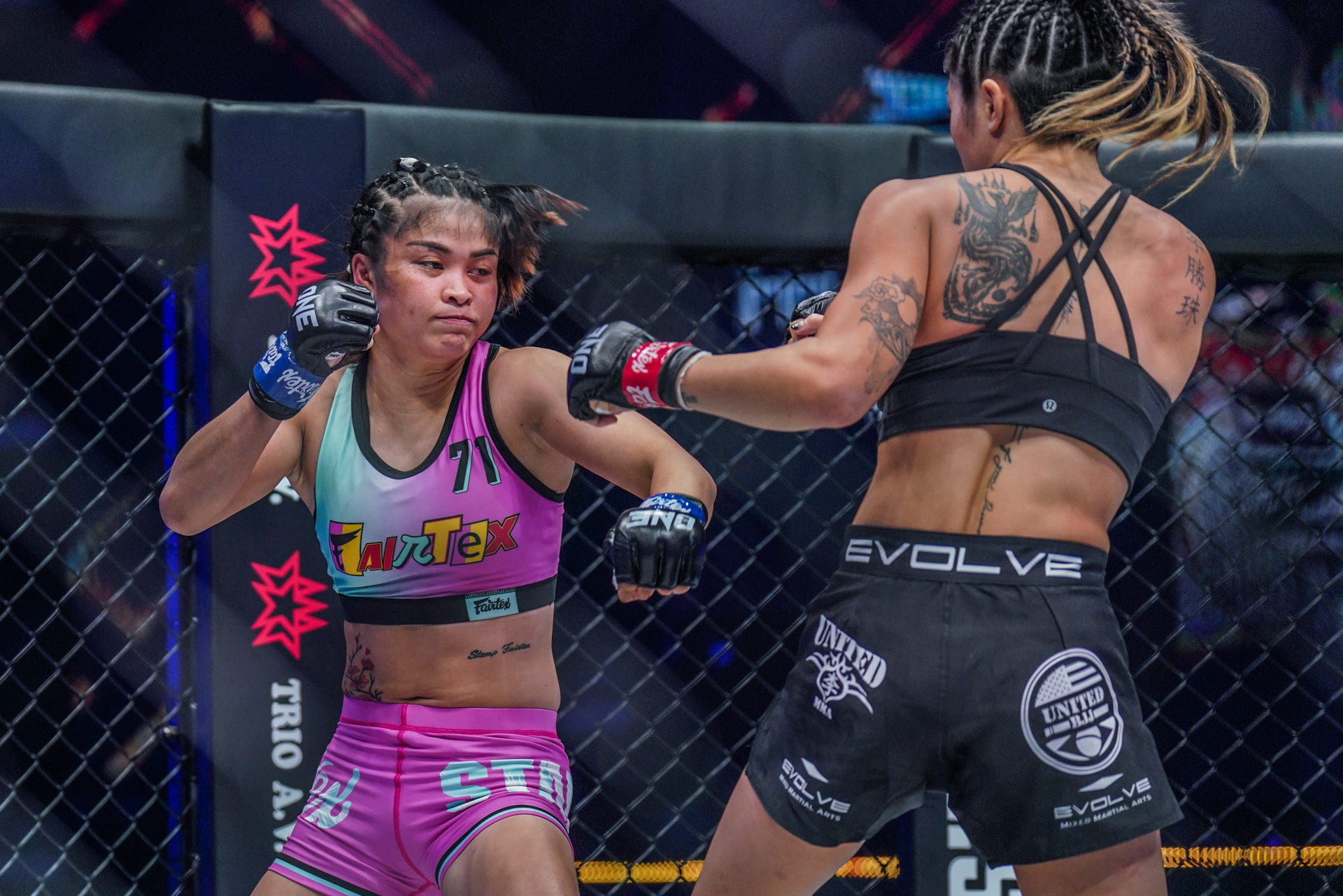 Former two-sport ONE World Champion Stamp Fairtex is confident that her striking will be the key to victory over #5-ranked atomweight MMA contender Jihin Radzuan on Friday, September 30.

Jihin recently critiqued the Thai megastar’s skills ahead of their MMA clash at ONE on Prime Video 2, even saying that her rival’s stand-up ability was a little overrated and that the Fairtex representative was “probably the worst of the fighters” she had most recently faced in the Circle.

But Stamp – the division’s top-ranked contender – believes her vast Muay Thai and kickboxing background will be too much for the Malaysian sensation to handle.

Stamp, who is eager to rebound from her recent ONE Women’s Atomweight World Title loss to Angela Lee in March, knows Jihin brings a well-rounded skill set into the contest. However, the Thai believes there are some glaring holes in the wushu champion’s game.

“Jihin’s strengths are her wrestling and ground game. She is quite good at striking, but I think this is her weakness as well, because if we trade with each other, I believe I have more experience in striking than her.

“Let’s test it in the Circle. Let’s see who is faster and more accurate.”

Despite “Shadow Cat’s” assertions that she can hang with Stamp on the feet, the Thai megastar believes things will be different when they finally stand toe-to-toe at ONE on Prime Video 2.

The Fairtex product is ready to repel the Malaysian’s offense and bring her own powerful arsenal into play at the Singapore Indoor Stadium.

“I will defend myself from her takedowns and always try to stay in the middle of the cage, avoiding my back from touching the Circle Wall.

“I intend to utilize my sharp and swift weapons like elbows and knees rather than kicks because I’ve seen that she likes to catch her opponents’ legs. I will kick less and use heavier and sharper weapons to stun her, and she won’t be able to put pressure on me.

“Muay Thai is my strength and what I can do best. If possible, I want to knock her out because I expect a bonus this time.”

After taking the #1 spot in the rankings through her ONE Women’s Atomweight World Grand Prix Championship victory, Stamp Fairtex is extra motivated to maintain her status in the hopes of getting a rematch with Angela Lee.

Jihin Radzuan would love nothing more than to defeat the Thai megastar and take her spot, but the Fairtex product knows a win is necessary if she ever wants another crack at the longtime atomweight queen.

“Victory means a lot to me in this fight. If she beats me, she may take away the #1 position from me. Of course, I won’t let her do that. I’ve been training so hard to maintain my #1 position so that I could challenge Angela Lee again.

“This is not a feeling of pressure. For me, it’s more like a driving force.”

Stamp put up an admirable effort against the ONE Women’s Atomweight World Champion in her last encounter, and she’s taken some valuable lessons away from their bout.

The Pattaya resident has spent time working on her weaknesses, and she knows that process of evolution can never stop if she wants to claim the gold in the future.

“I learned not to underestimate opponents, and I should keep developing myself. Because Angela Lee is a well-rounded fighter, I need to improve in every aspect – especially BJJ – because that’s the reasons I lost to her.

“Back then, I still had a BJJ blue belt. I still have a lot to learn in BJJ. But now, I’ve got a [purple belt] in BJJ. I’ve made progress. If I can fight with Angela Lee again, I think I have a chance to beat her. I’ll do everything to improve myself and fix my weaknesses.”