“The Silencer” has sent a strong and loud message that he is ready for a second shot at gold.TV: Check local listings for global broadcast | PPV: Official Livestream at oneppv.com

In front of a raucous home crowd in Manila, Philippines, Kevin “The Silencer” Belingon just took another step towards his long-desired rematch with ONE Bantamweight World Champion Bibiano “The Flash” Fernandes.

The Filipino knockout artist turned in a stellar performance on Friday, 10 November, firing off a dazzling array of strikes to hand Kevin “Oldboy” Chung the first loss of his professional career. The bantamweight battle took place at ONE: LEGENDS OF THE WORLD, which aired live from the Mall Of Asia Arena.

With the first strike thrown in the contest, Belingon unleashed a nasty inside leg kick that blasted Chung. Unfortunately the strike glanced off Chung’s groin guard, which caused a pause in the contest for a few moments.

Upon the restart, “The Silencer” resumed his relentless assault with a kicking attack, as he started punishing Chung to the legs and body before finally going up high to the head. Belingon even managed to throw a lightning quick spinning heel kick that stunned “Oldboy” as the barrage of strikes continued in rapid-fire fashion. The onslaught continued to the end of the round, with the the Team Lakay product continuously pushing for the finish in all areas. to Chung’s credit, he stayed composed, and made it to the second stanza.

The Filipino slowed down a little when the bout restarted, but he still exploded with an arsenal of kicks. “Oldboy,” however, searched for an opening to finally put together some offense of his own. With just over a minute to go, the South-Korean finally pressed forward before landing his first takedown of the contest. Belingon quickly scrambled out from bottom, getting back to his feet just before the round came to an end.

As the final five minutes of the bout got underway, Chung quickly looked for another takedown. While he was able to put Belingon on the mat, the match only stayed there for a matter of seconds before the Filipino exploded back to his feet. 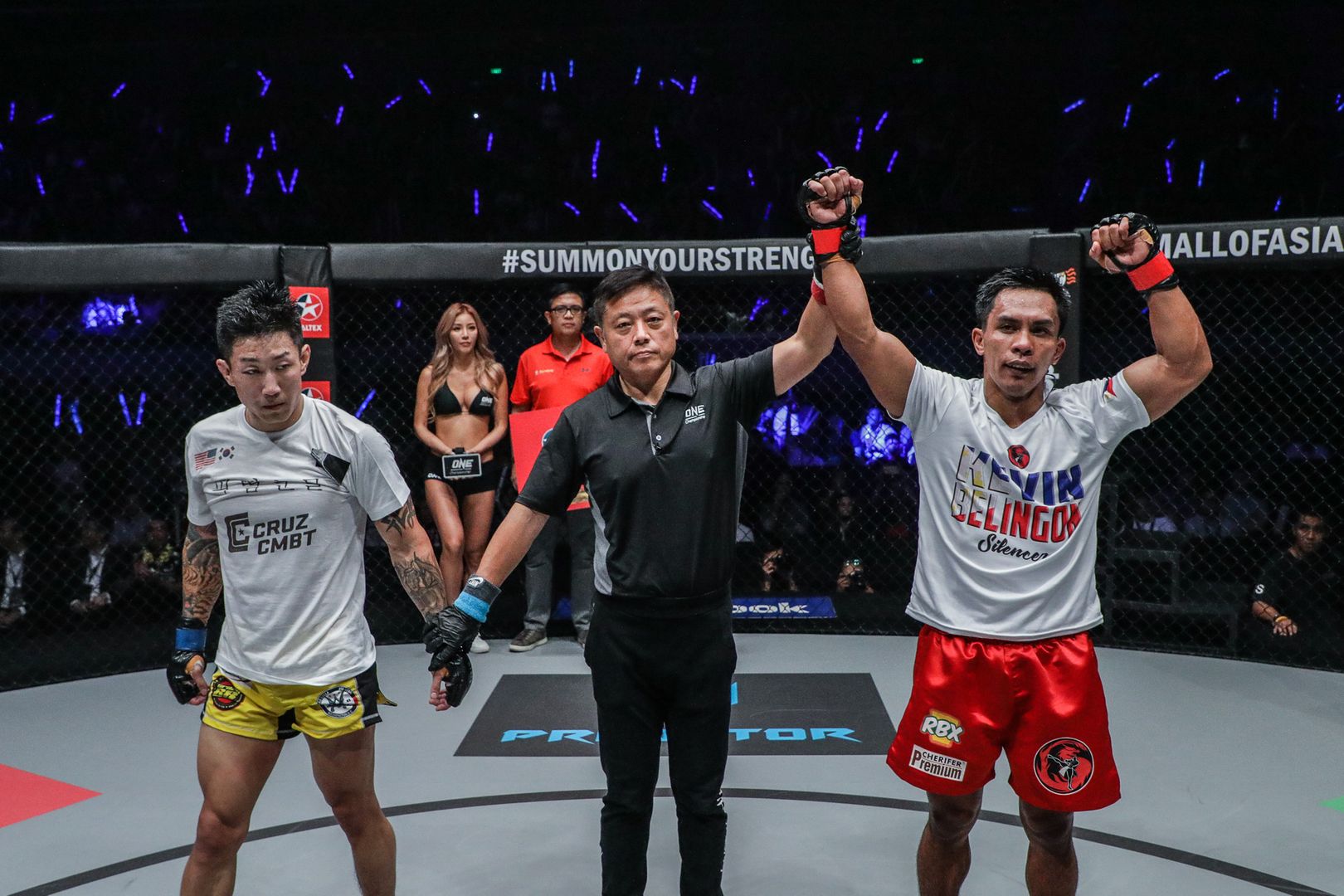 While “Oldboy” definitely had better luck with his ground work in the second and third rounds, the Team Lakay veteran was quick to escape all of his submission attempts before uncorking his powerful strikes. Every shot Belingon threw looked like a potential knockout blow.

As the match came to an end, “The Silencer” celebrated as he was awarded the unanimous decision win. With his fourth consecutive victory, Belingon moves to 17-5, and puts himself even closer to a potential world title rematch with Fernandes.

As for Chung, he loses for the first time. His record now stands at 5-1, but Friday’s loss will serve as a learning lesson as he looks to rebound in the future.