Jenny Huang is planning to shock the world.

The undefeated atomweight prospect will attempt to maintain her spotless record when she battles two-time Filipino Wushu Champion April Osenio at ONE: AGE OF DOMINATION on Friday Night, 2 December, live from the Mall Of Asia Arena in Manila, Philippines.

“This will be a fight of two cobras taking very careful shots at each other,” the 25-year-old states. “I am sure it will be a very intense and interesting fight. I am sure that I will surprise everyone again.”

Based out of Baguio City, the 22-year-old Osenio is a member of the highly-regarded Team Lakay. The hometown favorite is a wushu specialist who is currently riding an impressive two-fight win streak with back-to-back submission victories over fellow Filipina Natalie Gonzalez Hills and Malaysian superstar Ann Osman.

Although the Filipina is rounding out her game, Huang is not overly concerned.

“I see many ways that this fight could go,” she says. “Fighters always need to be prepared for a variety of different outcomes. I have to get ready to beat her within three rounds. This will be a long fight, and I need to prepare for it.” 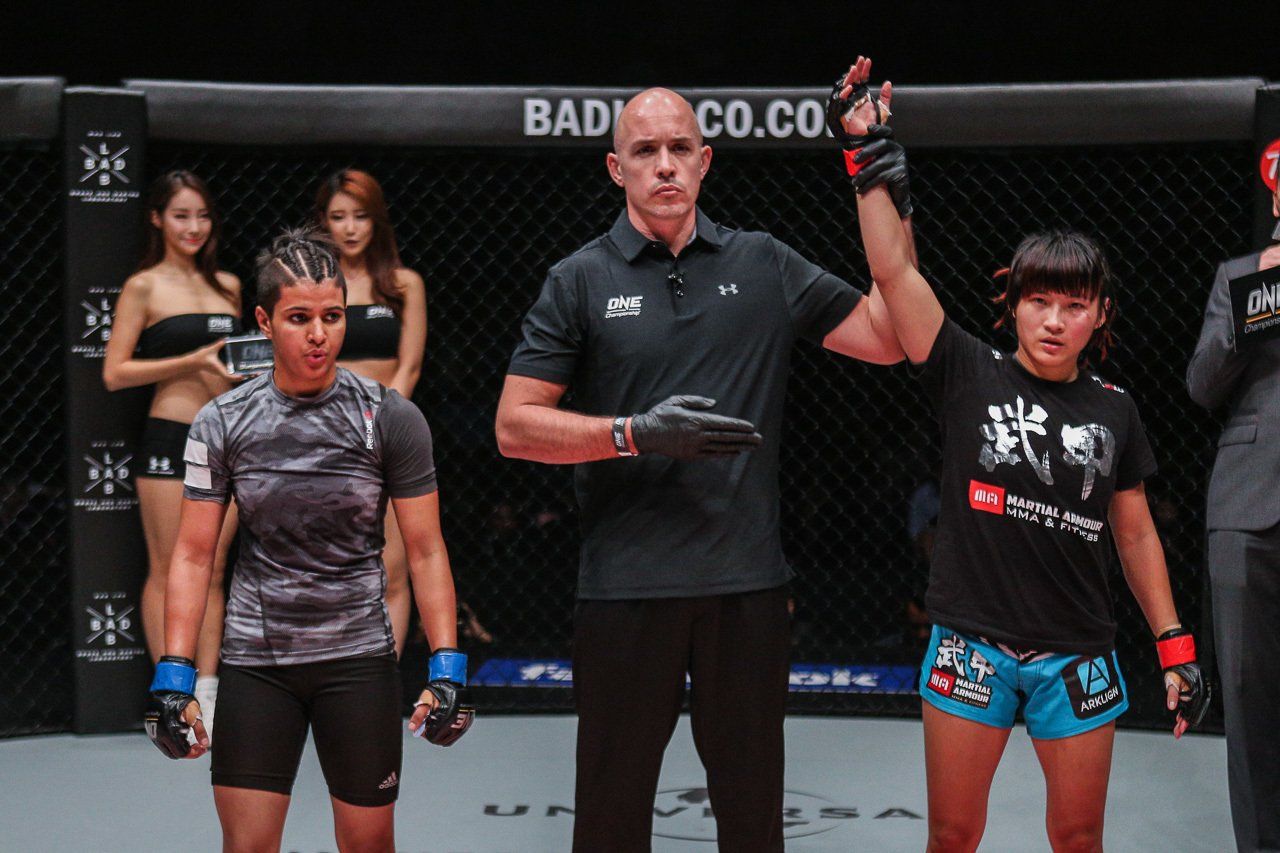 Huang may be considered the underdog, but she has always wanted to be a martial arts icon, and defeating Osenio will bring her one step closer to her lifelong dream.

Growing up in Chinese Taipei, Huang often imitated the kung fu moves of martial artists on television and movie actors including her favorite, Jackie Chan. She was so into it, her father jokingly told her to go to the Shaolin temple. But when she turned 12, she pursued judo and joined the high school team.

“I was very happy to finally learn some real martial arts. I was not just pretending anymore, I was actually doing it. I was becoming strong and awesome like the people I really admired,” she recalls.

“Whenever I trained very hard at judo, I knew that I was different. I had a goal. It is a feeling that few have, knowing what to do. Very few people get that feeling. But when I started this, I suddenly knew. I knew what I wanted to do.”

Huang received her black belt and studied the martial art for six years. After she graduated from university, she traveled the world, and stopped by America and Singapore where she learned more about Brazilian jiu-jitsu and this sport called mixed martial arts.

In 2014, when she returned to Chinese Taipei, she immediately began working on her jiujitsu game. She also participated in amateur kickboxing competitions.

Between her passion for competing, her knack for naturally picking up techniques, and her love for the martial arts, a career in MMA was inevitable.

“MMA is in my blood. I had learned so many techniques that I wanted to try it,” she says. “I enjoy every day of practice in the arena and in the gym. I love the constant challenges that this sport brings to me, so when it came to pursuing MMA professionally, I simply wanted to see how far I could go. It is an amazing experience.”

Since making her MMA debut a year and a half ago, the Martial Armour fighter has won all four of her matches, which includes consecutive submission victories over Egyptian wrestler Amira Badr and Delhi’s seven-time kickboxing champion Jeet Toshi. 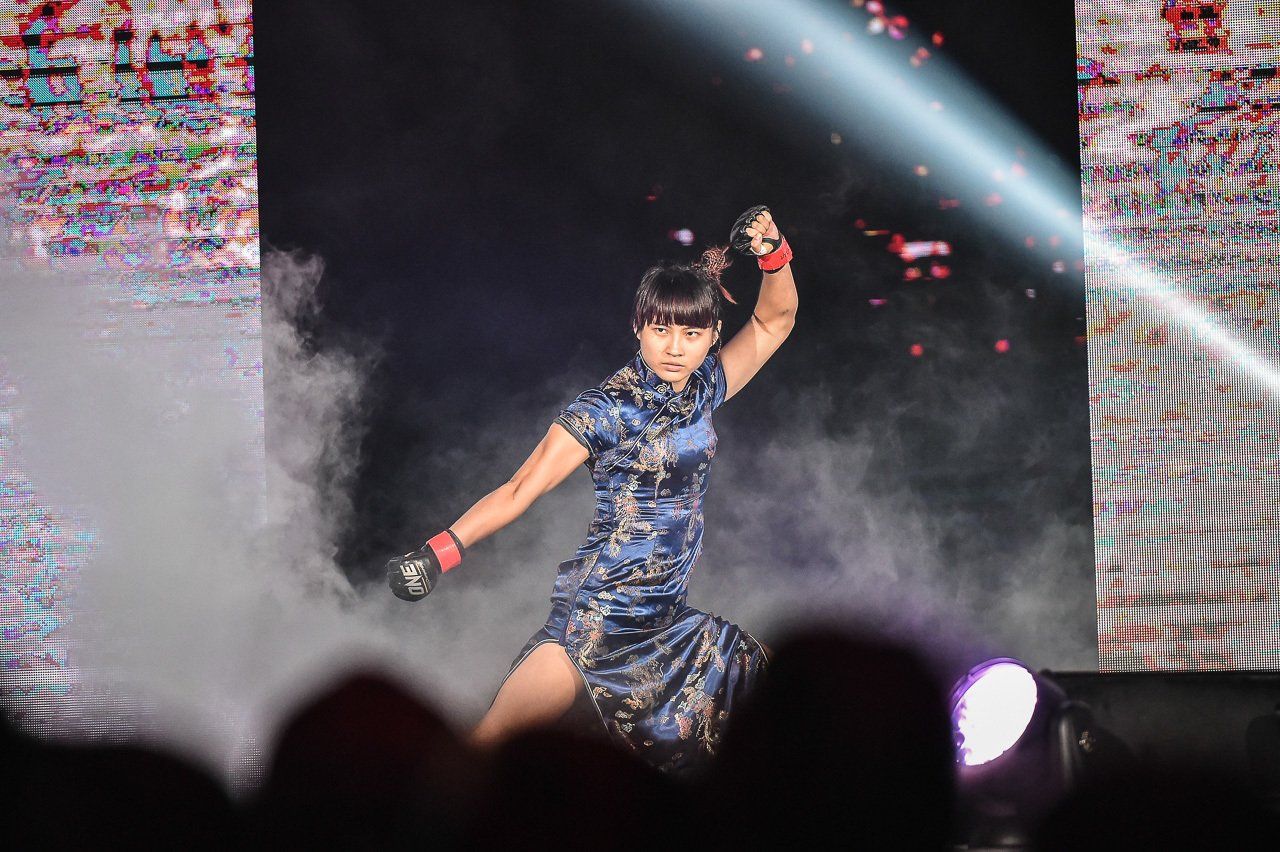 She also made an impression at September’s ONE: UNBREAKABLE WARRIORS by walking to the cage dressed as Chun-Li from Capcom’s Street Fighter.

Though Huang is becoming one of the most promising talents in the division, and is in the process of building herself as a threat to Angela Lee’s ONE Atomweight World Title, she is the first professional women’s mixed martial artist from Chinese Taipei, and finds encouragement from other women all throughout the nation.

“All the other women in my country inspire me to keep going. Every day, I get dozens and dozens of questions from other women in the country,” says Huang. “People constantly ask me how I can keep going. They want to know how they can continue to follow their own dreams in their lives. But life is not easy. It is hard.

“Any goal that you want, you need to work towards it every day. Find that goal. Find that one thing that you are passionate about and hold on to it. You do not always need to get punched to follow your dream, but you do need to take a few blows with every goal that you really care about.”

Huang may take a few blows from Osenio at ONE: AGE OF DOMINATION, but she cares about achieving victory, and is willing to eat a few punches to get the win.

If she does indeed get the win, it will bring her a tiny bit closer to getting a title shot and cementing her status as a martial arts icon, just like her hero, Jackie Chan.