Jenny Huang (5-1) may have recently experienced the first loss of her professional career, but she learned a lot about herself, and like the true martial artist she is, the blemish spurred her on to improve.

This past March, the athlete known as “Lady Gogo” fearlessly challenged ONE Women’s Atomweight World Champion Angela Lee for the belt at ONE: WARRIOR KINGDOM. Despite being competitive in the opening two frames, Lee softened up the 26-year-old challenger with vastly-enhanced striking, and finished Huang off with ground strikes in the third round to retain the belt.

For Huang, the bout served as an awakening. “I never thought I would have an opportunity so quickly to get a title shot. The most difficult thing was the pressure on my mind,” Huang explains. “Angela Lee not only has a martial arts family background, but is also an all-around fighter.

“I had to improve all of my techniques, on offense and defense. I had to deal with everything in a short amount of time. Any time I am training, I need to be preparing, and ready, to be an all-around fighter. Before, my strong point was only grappling, and [the Lee] fight showed striking was my weakness. I cannot just focus on one thing.”

Just like that, Huang was determined to build upon her judo black belt background, and continue her natural evolution as a martial artist. After leaving her longtime camp, Martial Armour, in her native Chinese Taipei for Northern China’s Tianjin Top Team earlier this year, she decided to travel to the rich martial arts haven of Tokyo, Japan, for her upcoming bout.

Huang has spent the past few months training at the well-respected Abe Ani Combat Club, or AACC for short. Under the guidance of her good friend Hiroyuki Abe, whom she calls “Professor Abe,” she is improving on all facets of the game — most notably, her wrestling. She also has been training alongside some of the top female athletes in the country.

“I went to Japan to see more martial arts styles,” she says. “There are so many professional female fighters in many gyms here, so it is really exciting. In Chinese Taipei, there are no other female mixed martial artists, but in Japan you can easily find many in gyms, and train together. In my weight class, I am a shorter fighter, and I can find many fighters here that are the same height as me.”

Now, three months following her failed attempt to capture the title, the former top contender will make her return to the cage on Friday, 30 June, and this time around, she will enjoy a slight height advantage over her opponent. 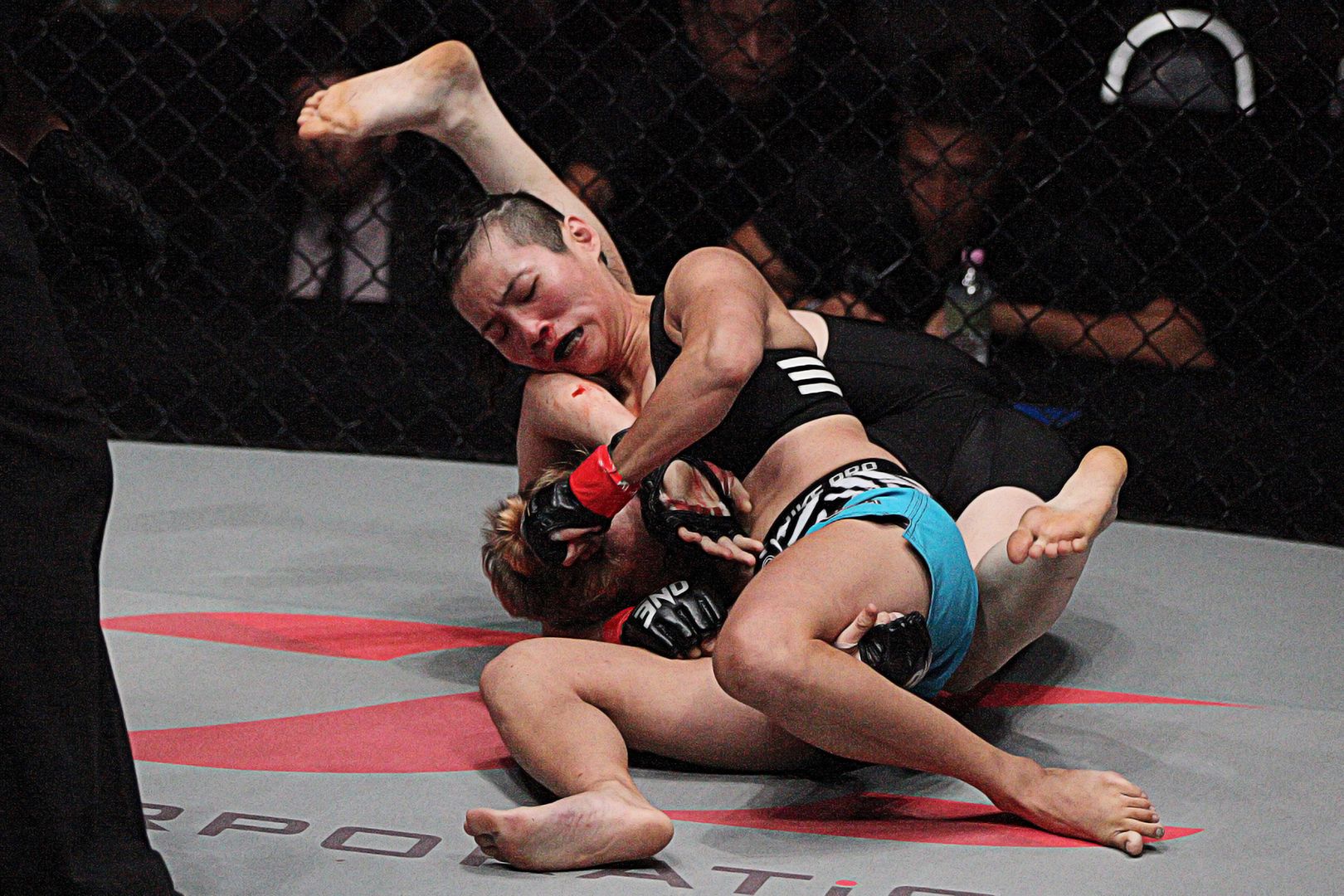 Huang is scheduled to meet fellow former title contender Mei “V.V.” Yamaguchi at ONE: LIGHT OF A NATION, live from the Thuwunna Indoor Stadium in Yangon, Myanmar. Coincidentally, that venue also happens the same place where Huang made her successful promotional debut nearly two years ago.

Yamaguchi, who represents Riki Gym, Gods, and Hybrid Fighter, is a well-rounded competitor with a karate black belt. A former DEEP Jewels Featherweight Champion, she holds a 15-10-1 record.

Like Huang, the 34-year-old Japanese dynamo previously clashed with Lee. Yamaguchi made her ONE Championship debut while challenging for the inaugural ONE Women’s Atomweight World Championship in May 2016 at ONE: ASCENT TO POWER, and she nearly knocked out the “Unstoppable” Singaporean with a right cross just seconds into the third round.

Although it was a thrilling back-and-forth affair, Lee earned the nod, and the title, that night. “V.V.” then squared off against Istela Nunes three months later at ONE: HEROES OF THE WORLD and, again, in another closely-contested bout, lost. That time, it was via razor-thin split decision.

Looking to avoid the only three-fight skid of her career and eager to get back into title contention, Yamaguchi is extra motivated to achieve victory. But Huang is equally driven to show the world just how much she has evolved as a martial artist.

“Mei (Yamaguchi) has more experience and she is a strong fighter,” the 26-year-old acknowledges. “I did see her past few fights. She is tough, has all-around good skills, and good stamina as a fighter. But l will show everyone my new skills in this fight. I believe this fight will be amazing, and I have confidence will win.”