Itsuki “Android 18” Hirata may be the youngest participant in the ONE Women’s Atomweight World Grand Prix, but she believes her time is now.

The undefeated Japanese powerhouse can take a big step toward the ultimate prize when she meets American dynamo Alyse “Lil’ Savage” Anderson in the quarterfinal round at ONE: EMPOWER, which broadcasts live from the Singapore Indoor Stadium on Friday, 28 May.

Hirata knows this historic mixed martial arts tournament is loaded with highly accomplished veterans who possess polished skills and have a few tricks up their sleeves. But the 21-year-old Tokyo native thinks her youthful vigor could be a major key to success.

“The [other competitors] are all only a couple of years older than me, so in that respect, I see this as a chance to define the best athletes in the coming generation,” she says.

“I think it would be fantastic if I won as the youngest, and I think there are things that I can do because I am the youngest, so I want everyone to look forward to that.”

The global fan base has certainly been looking forward to the ONE Women’s Atomweight World Grand Prix – especially the return of “Android 18.”

That’s because Hirata has been absolutely dominant and thoroughly entertaining in her career to date.

But now, the Japanese rising star is bracing for her toughest challenge yet in Anderson, who is one of North America’s top atomweight fighters.

“Lil’ Savage” owns a 5-1 professional record, but she also gained plenty of experience on the U.S. amateur circuit. In fact, the 26-year-old went unbeaten as an amateur, earning six decisive victories and gleaning valuable insights during that two-year campaign.

Hirata has carefully studied Anderson, who holds an 8-centimeter height advantage and will be the Japanese athlete’s tallest opponent to date. From what she’s seen, “Android 18” feels the American’s strengths lie in the stand-up department and with submissions that utilize her length.

“I think she has a long reach and is a striker. I think she will probably try to avoid grappling,” the Tokyo native says.

“I think that she would use her reach and that she would be good at the triangle choke and figure four because of her long legs. But I believe that I can win, technique-wise, so I feel that I will be ok with [her grappling].” 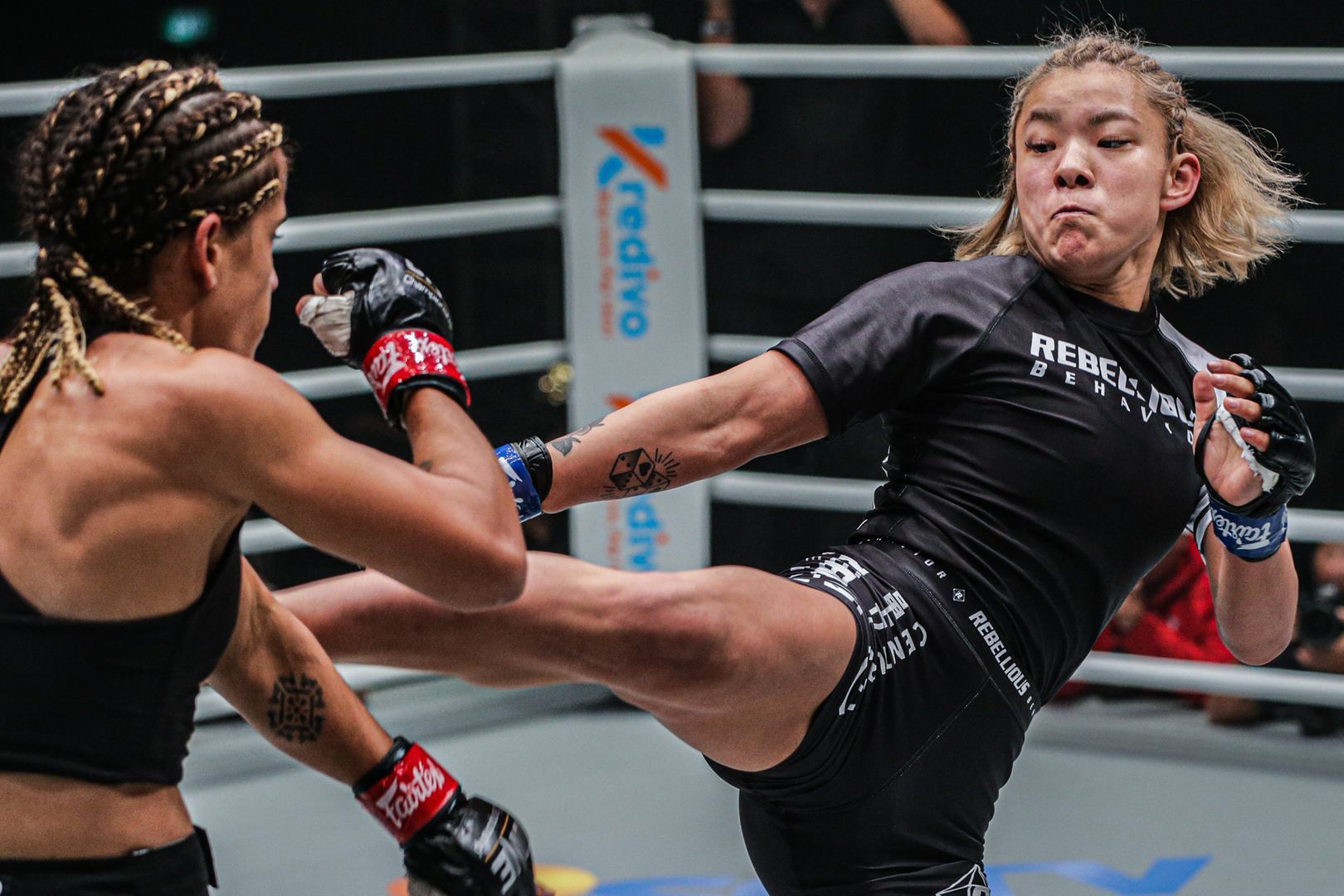 Ahead of this quarterfinal showdown, Hirata has been preparing at a few different venues – including with the Krazy Bee team, which is led by the legendary Norifumi “Kid” Yamamoto – in an effort to level up her skills and find ways to deal with Anderson’s height and vaunted striking.

The Japanese phenom has also been training with tall, thin male athletes so she can get used to throwing her shots higher and discover how to better utilize her grappling.

“I’ve been doing boxing and wrestling a lot, and I think I’m finally becoming more like a mixed martial artist,” Hirata says.

“It’s harder to win when your opponent is studying you and working on countermeasures, so I think it’s come in handy to have versatility in mixed martial arts.

“My training has been very productive. In the boxing gym, I am practicing pad work at a close distance. I used to back off when I got hit a little, but I’m trying to be more conscious of coming forward even if I get hit. I was beaten up in the kickboxing gym, but I think that was just practice to get my eyes used to it, and I’m getting pretty confident in that.”

While Hirata is the youngest competitor in this atomweight bracket, she has very big dreams that start with the biggest women’s tournament in mixed martial arts history.

And if “Android 18” does win the Grand Prix’s coveted silver belt, she would also earn a crack at reigning ONE Atomweight World Champion “Unstoppable” Angela Lee later in 2021.

But the dream doesn’t end there.

“I want to come back [to Japan] with the belt and create an environment not only for myself, but also for the girls,” Hirata says. “I want to create a training environment in Japan like other gyms in the world, where there are many women.”

For now, a victory over Anderson would take “Android 18” one step closer toward making that vision a reality.