Edward “The Ferocious” Kelly promised to win his next fight at all costs, and that’s exactly what he did at ONE: FULL BLAST.

The Team Lakay veteran survived some shaky moments to outlast the highly touted Ahmed “The Prince” Faress via split decision in their featherweight mixed martial arts clash, which aired on Friday, 28 May. 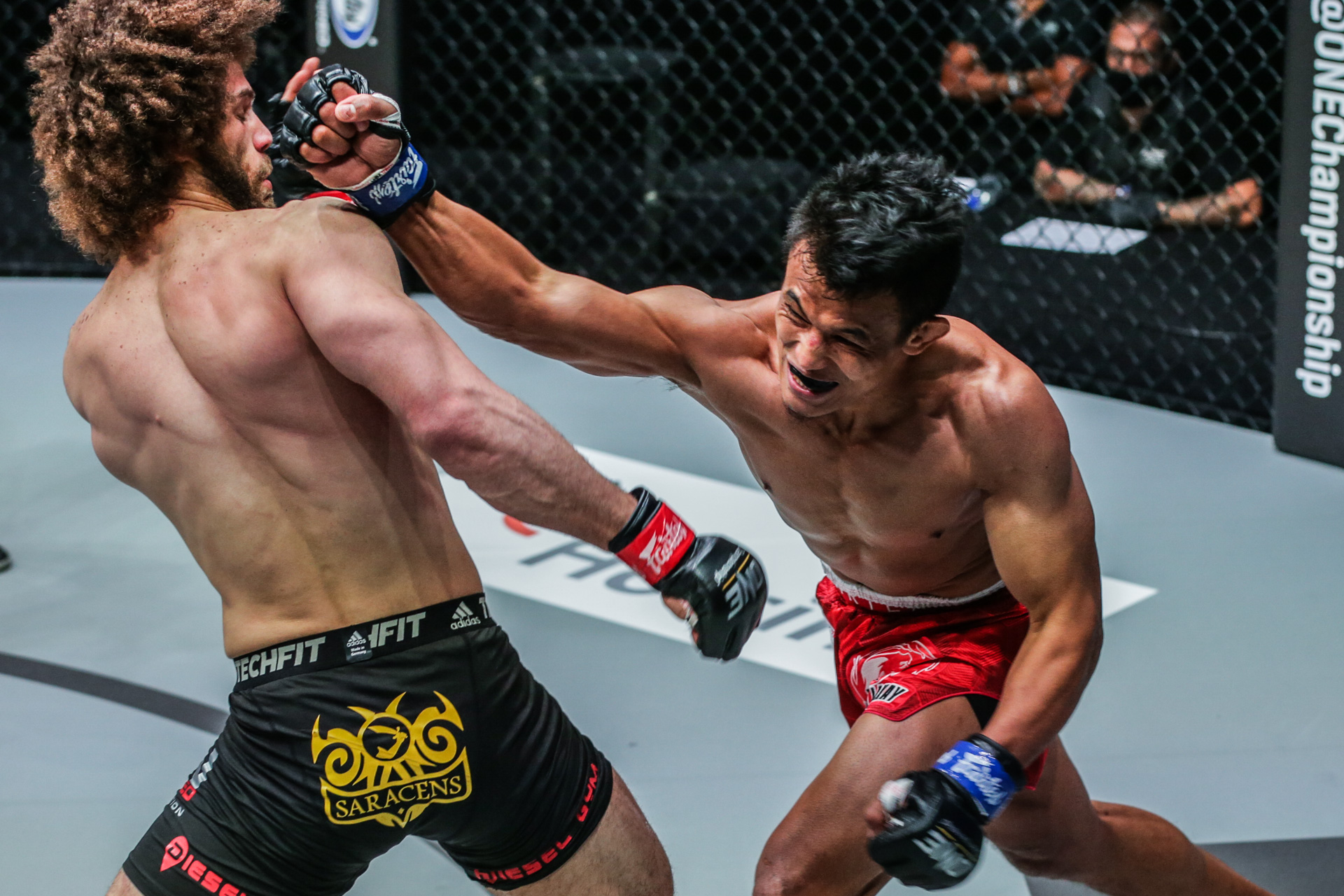 It wasn’t an ideal start for the 37-year-old Kelly, as the debuting Egyptian floored him early with a surprising right hook. However, the Filipino sprung back up, connected with a leg kick, ducked under a head kick attempt from Faress, and landed a takedown.

Faress tried to counter with a triangle, but Kelly was composed enough to slip out of the submission attempt and take control inside half guard. The 29-year-old Egyptian got his rival back in his guard, but not before eating some solid punches to the body and the head.

Using his butterfly guard, “The Prince” escaped the bottom position, returned to his feet, and forced a clinch against the Circle Wall, where he eventually secured a trip and landed in Kelly’s half guard. 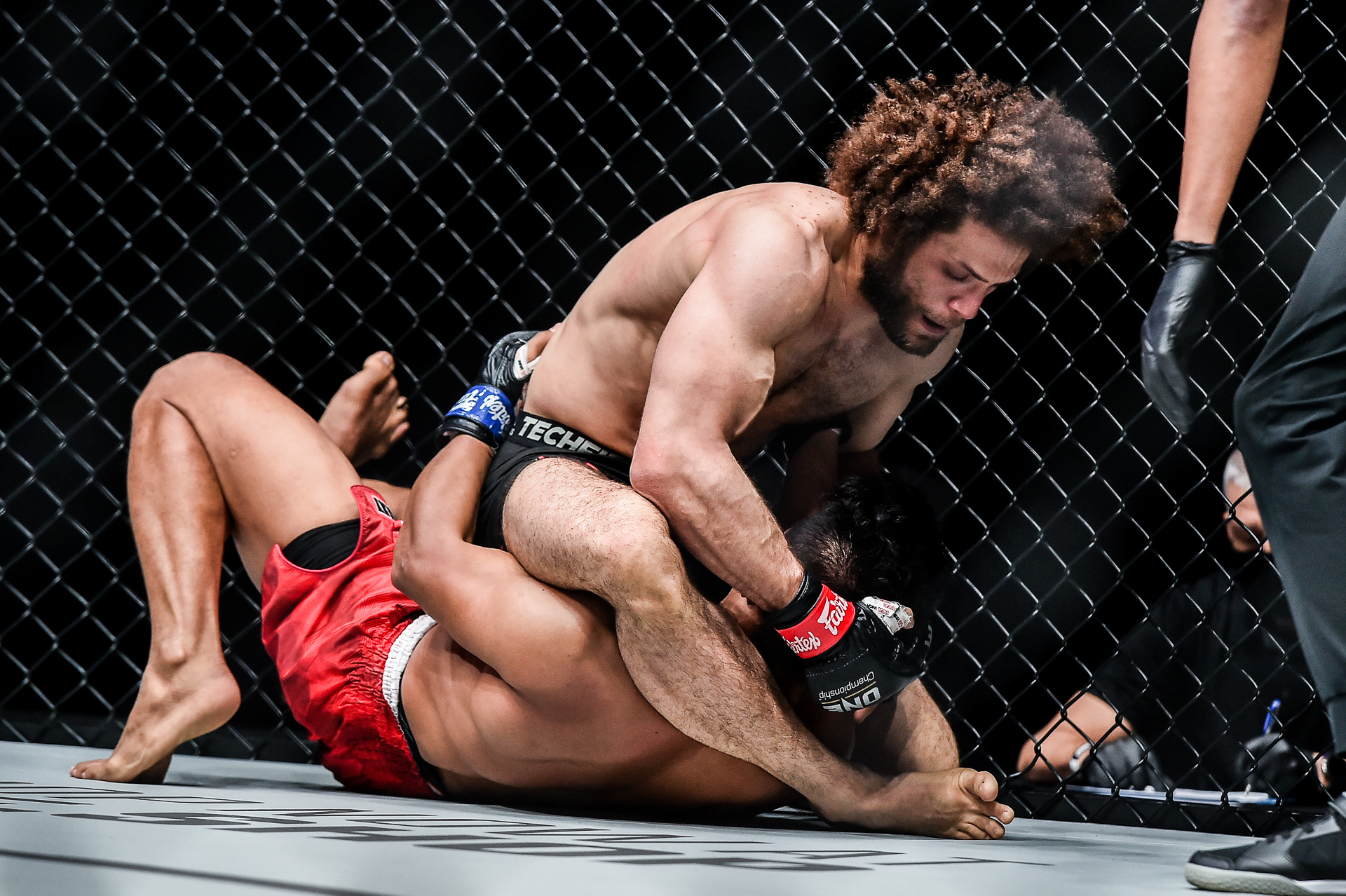 Faress then mounted his foe and attempted a triangle choke from that position. “The Ferocious” wasn’t having it, though, as he slipped out and began raining down punches from the top position.

As the pair stood up, Faress once again went to that step-through hook, but Kelly was better prepared and countered with a short uppercut.

Near the end of the first round, the Filipino inadvertently caught Faress with a low kick to the groin. As the match restarted near the buzzer, the Egyptian tried to land a big one – going for a flying knee – but Kelly was ready and countered with two short hooks to end the action-packed stanza. 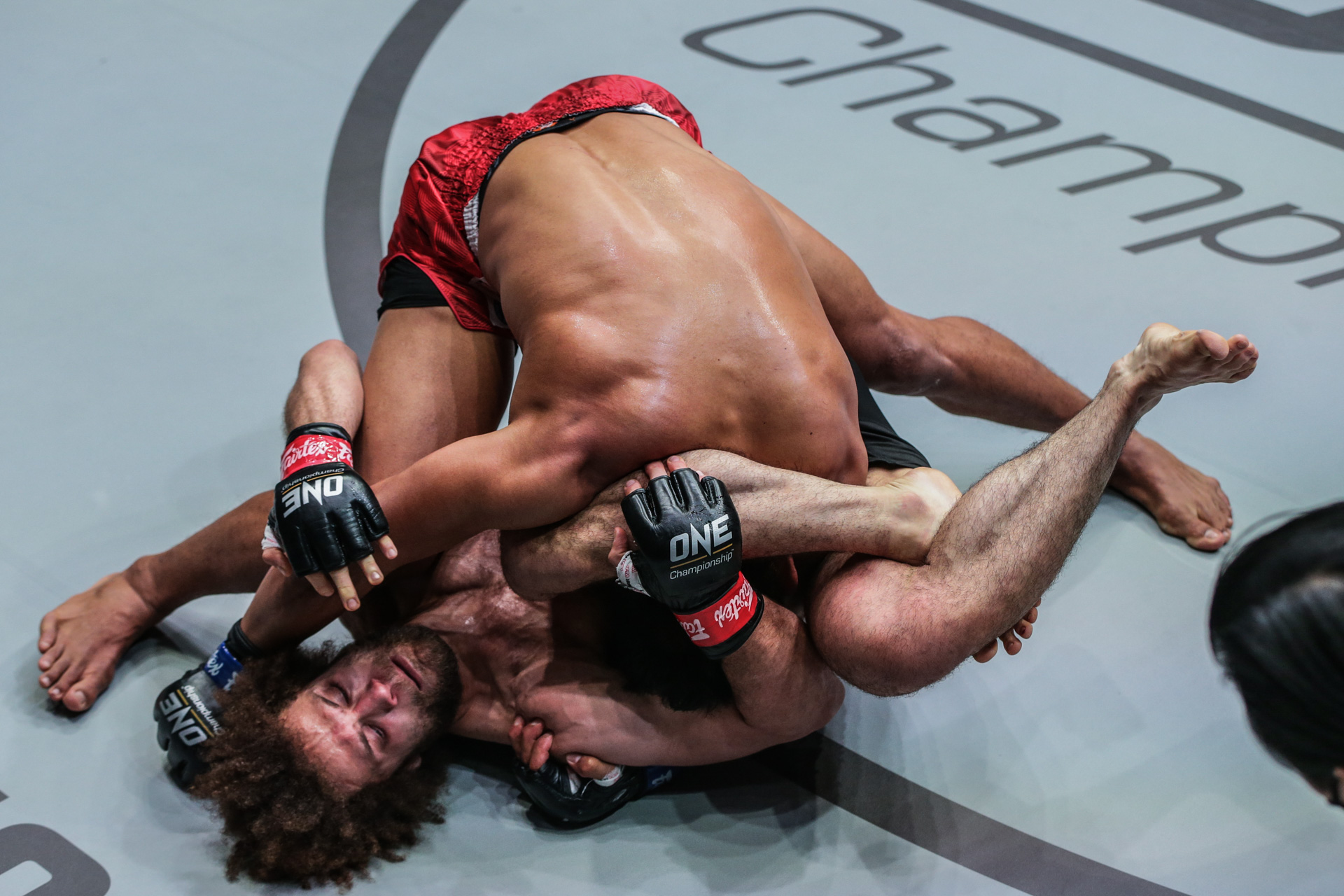 The second frame started with both men trying to gain momentum on the feet – Faress working on his hands and Kelly sizing up his opponent with kicks. Midway through the round, “The Prince” went high with a head kick, but the Team Lakay star caught it and slammed him down to the ground.

Kelly, however, found himself in a precarious position, as Faress quickly locked in a deep triangle choke. That position lasted nearly a minute and a half, but the Filipino veteran managed to survive by tucking his head close and softening his opponent’s hold with some body shots.

Looking to make up for lost time, Kelly swung wildly from the top position, raining elbows down on Faress and throwing punches to the side of the body. The bell sounded with Kelly in half guard, looking to continue dishing out punishment. 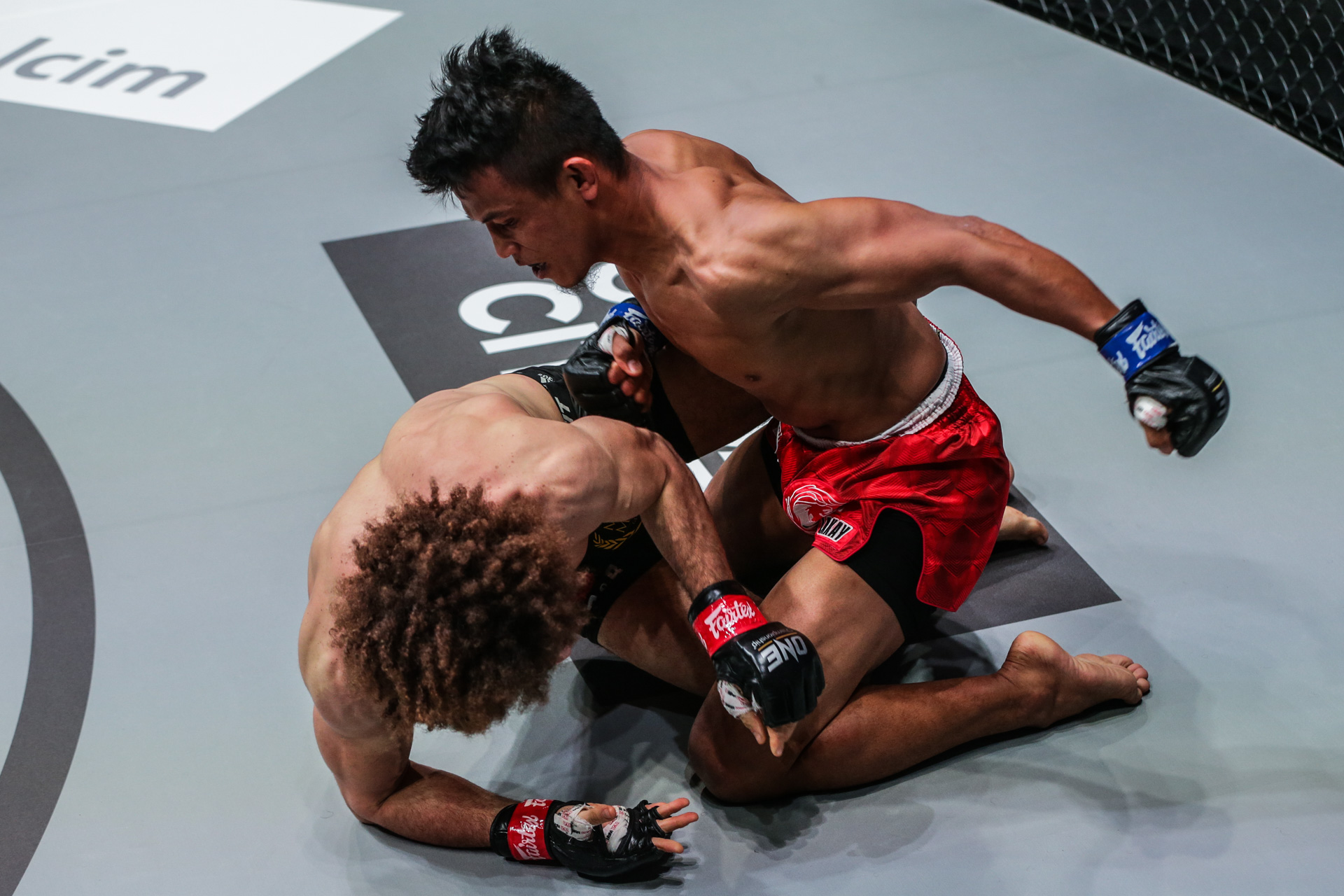 After two fast-paced rounds, things simmered down in the final frame. Faress’ legs looked worn out after his failed triangle attempt, while Kelly was surprisingly gun-shy despite facing a stationary target – perhaps still wary of the Egyptian’s right hand.

Still, “The Ferocious” continued to score with his strikes, chopping away on his opponent’s legs with low kicks while moving back just as Faress loaded up his right hand. It was a strategy that Kelly continued to employ for the duration of the stanza, sometimes mixing up his point of attack with body shots that came few and far between.

Faress once again tried to surprise his foe with a flying knee near the final bell, but just like in the first round, Kelly was ready and he landed two more body shots as time expired. 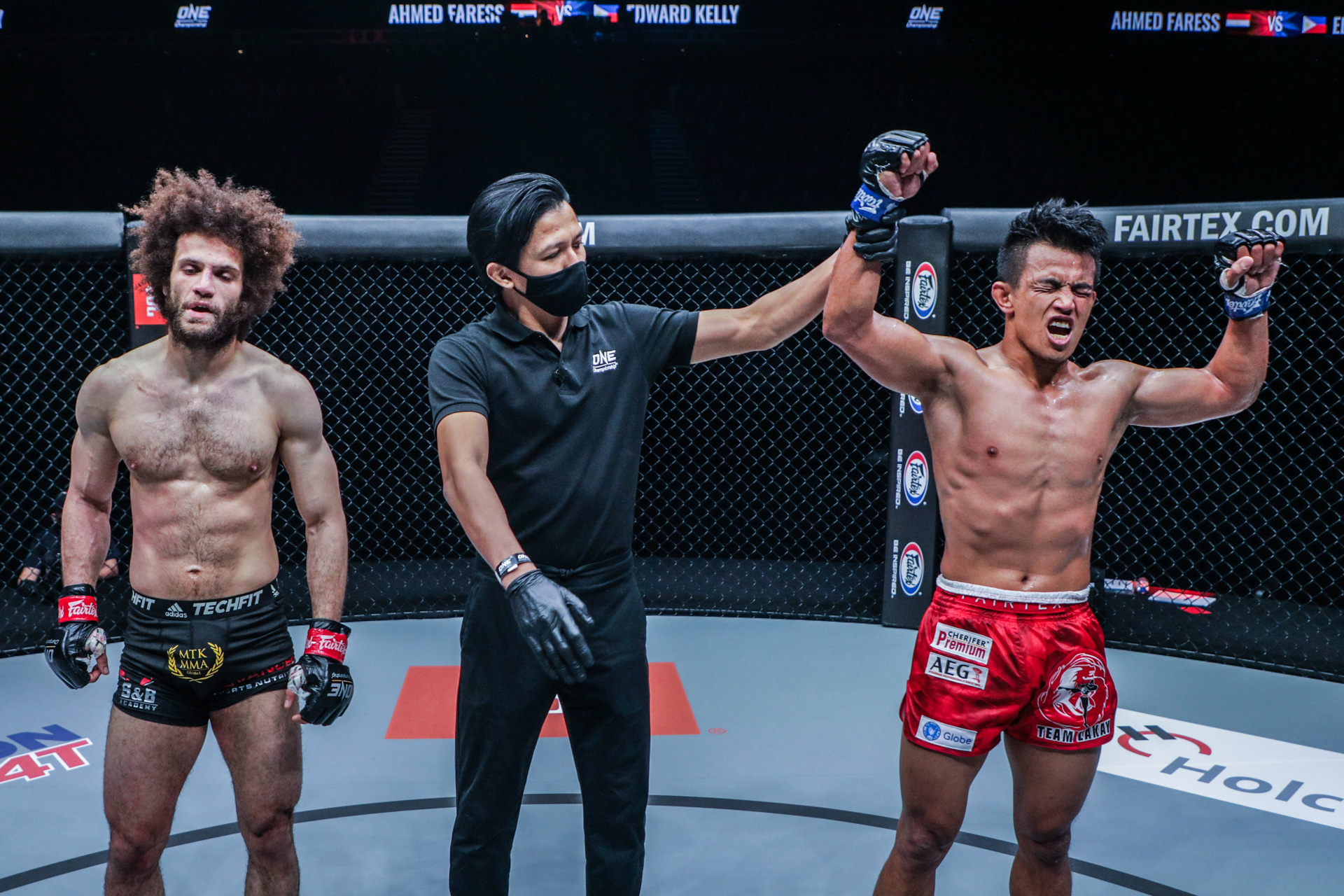 After three rounds, two of the three judges ruled the contest in Kelly’s favor.

It was a big win for Filipino veteran, who was eager to return to his winning ways after falling to surging Chinese knockout artist Tang Kai in his last outing.