On a night of incredible upsets at ONE: ENTER THE DRAGON, the biggest one may have come from Christian “The Warrior” Lee, who moved up a division to take the ONE Lightweight World Title from Shinya “Tobikan Judan” Aoki.

The Singaporean had to defy a colossal deficit in experience to make an incredible comeback and make history by becoming the youngest male World Champion in mixed martial arts history on Friday, 17 May.

Aoki started the bout by putting the young challenger under extreme pressure. He pushed Lee back against the ropes and eventually, after some clinch work, the reigning World Champion took the 20-year-old to the mat and landed in full mount.

The Japanese icon methodically went to work on the ground and, as Lee attempted to escape from the bottom, “Tobikan Judan” saw his opportunity to transition to a tight armbar.

UNBELIEVABLE toughness from "The Warrior!" ????

He torqued his rival’s arm into an unnatural position, but incredibly, despite his clear discomfort, Lee managed to withstand the pain and also find his way out of the position. As he got back to his feet, he was met with a huge ovation from the crowd inside the Singapore Indoor Stadium.

The bell to signal the end of the round rang seconds later, and the challenger went back to his corner looking like a man who had made it through the early storm.

When the action restarted, “The Warrior” looked to keep things in the stand-up realm in the second stanza as he fended off Aoki’s attempts to impose his ground game again.

When your little bro achieves his lifelong dream ????

Once the Singaporean challenger had created some space between himself and the Japanese World Champion, he found his rhythm and turned the tables.

Lee came forward and connected with a flurry of punches, and two clean left hands sent Aoki down in the corner of the ring. “The Warrior” followed his opponent to the mat and unloaded ground strikes as referee Olivier Coste dived in to wave off the action after 51 seconds of round two.

It meant Lee had earned his 12th career victory, defeated a legend, bettered his teammate, and captured the ONE Lightweight World Championship.

His sister – ONE Women’s Atomweight World Champion “Unstoppable” Angela Lee – was watching ringside, and she was quick to rush in to congratulate her sibling after his post-bout speech.

They are now the first ever brother-sister duo to hold mixed martial arts World Titles at the same time. 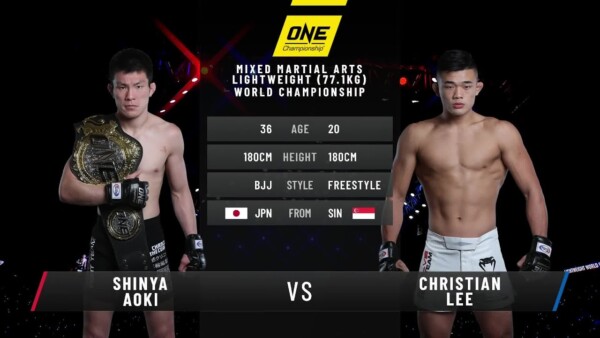