Chen “The Ghost” Rui showed off poise, composure, and a heavy right hand in his ONE Championship debut.

On Friday, 8 March, the Chinese warrior brought the crowd inside the Thuwunna Indoor Stadium in Yangon, Myanmar to its feet by putting away Roman “Boom” Alvarez with a tremendous second-round TKO at ONE: REIGN OF VALOR.

China's Chen Rui shuts down Roman Alvarez with a series of uppercuts for a TKO victory at 2:48 of Round 2!

China's Chen Rui shuts down Roman Alvarez with a series of uppercuts for a TKO victory at 2:48 of Round 2!Watch the full event on the ONE Super App ???? http://bit.ly/ONESuperApp | TV: Check local listings for global broadcast

It did not take long for the action to start in this 67-kilogram catch weight mixed martial arts bout, as both competitors launched a huge barrage of strikes at each other in the opening seconds of the first round.

While Alvarez winged monstrous overhand punches, Chen was much more measured with his combinations — especially with his right hand, which kept stinging the Guam native during the exchanges.

The Chinese athlete landed more strikes in volume, but “Boom” presented a lot of danger with his counter punches. In fact, one of those counter punches caught the 22-year-old debutant off guard and sent him to the canvas for a split second. Once the second round got underway, Chen quickly reestablished the pace by backing his rival against the cage and unleashing a flurry of rapid-fire punches.

“Boom” tried to live up to his nickname by ducking his head and uncorking those same wild overhand blows that kept the Chongqing, China resident at bay during the first stanza.

This time, however, “The Ghost” saw every one of those shots coming. He cleverly dodged out of the way, and then returned fire with his own counterstrikes. 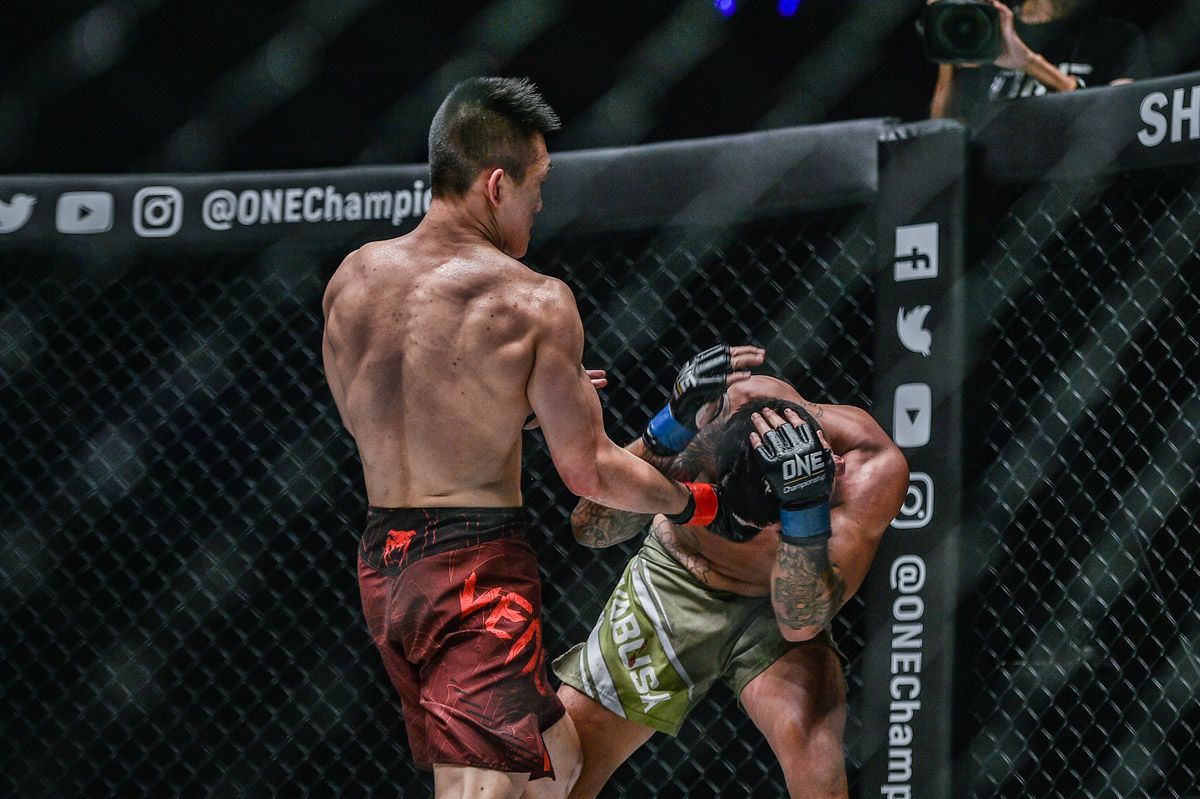 As Alvarez kept exploring with that same overhand right, “The Ghost” threw a perfectly-timed uppercut that cracked his adversary flush on the jaw.

The Guam native fell down to the canvas, and Chen immediately followed up with heavy punches to the body.

That left the referee no choice but to stop the contest at the 2:48 mark of round two. Chen was highly impressive and entertaining in his promotional debut.

This victory extended his spotless professional record to 7-0, and it appears as if another Chinese superstar has emerged.