Malaysian strawweight Ann Osman will step back into the cage on 10 February to face debuting Cambodian striker Vy Srey Khouch at ONE: THRONE OF TIGERS. She does so in front of a hometown crowd at the Stadium Negara in Kuala Lumpur.

“I have full respect for her,” said Osman, a product of Borneo Tribal Squad. “She is young and new to the sport, and that is admirable. But I have been training hard and I have stayed ready. It is going to be a really exciting fight.”

For Osman, this scenario brings back a lot of memories, especially when she reflects on her start in the sport.

The year was 2012. After paying for a ticket from one end of Malaysia to the other, Ann Osman found herself in a small venue in Kuala Lumpur, staring across the cage at her opponent for her first amateur MMA contest. It was also Osman’s first actual fight. Ever.

For the first two decades of her life, Osman had never struck another person. At age 30, she is the most recognizable female fighter in Malaysia, and one of the most popular fighters in ONE Championship.

Growing up in Kota Kinabalu, Malaysia, Osman was more into books and basketball than punches and kicks. She went to boarding school and later enrolled in college to study computer science. A chance meeting with a martial artist, however, changed everything.

“I started with Muay Thai,” she recalls. “I was introduced by my current coach in 2012, fellow ONE fighter AJ “Pyro” Lias Mansor.”

Originally, the Muay Thai regimen was just a way to stay in shape and pick up some tips on self-defense. However, Pyro had other ideas for his pupil.

“He slowly started teaching the team wrestling, which was my introduction to MMA,” she explains, reflecting on her beginnings. “I got hooked and kept coming to class.”

At the time, MMA was still a niche sport in Malaysia. The lack of mainstream attention or female faces proved no deterrent. Osman fell in love with the sport after her introduction to wrestling. There was also one landmark women’s fight that helped push her over the edge.

“Gina Carano was really hot at the time and she had her fight with [Cris] Cyborg,’” she says, citing their 2009 bout. “Women’s MMA was growing. I look up to Gina because she started with Muay Thai. She was a big inspiration and motivated me to train even more.” 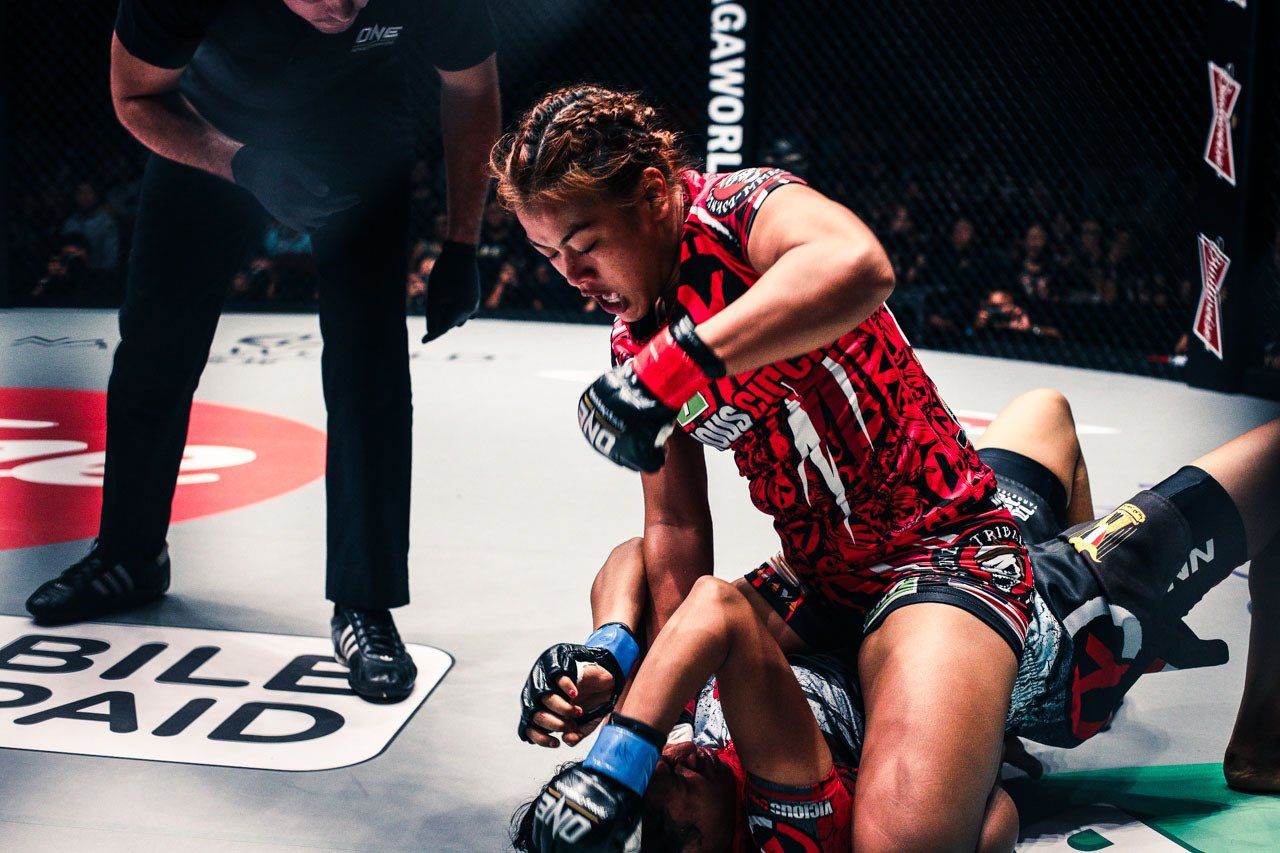 Osman refused to stop with just training. After a few short months, she went all in, signing up for her first and only amateur fight.

“It was not every day that you found another female amateur fighter,” she says about the rarity of the moment. “I had to pay my own expenses and fly all the way to Kuala Lumpur. But it was so rare to get any fight.

“There are a lot of amateur events now. Back then, it was hard to find, and there were not any other girls fighting. I did not expect it to turn out like this. I was holding a day job. I did not see any reason to fight other than that it was something I wanted to try.”

With just two weeks of preparation, she was ready for the fight that would change her life, saying: “I loved the adrenaline rush. After that, I started looking for more competitions.”

Osman was unsuccessful in her first bout, losing by armbar. While she did not get her hand raised, she won something else much more valuable: her nickname of “Athena,” after the Greek goddess of war.

“We got this rule where you earn your fight name,” she states. “I got the name from my coach after my first fight. He said I trained hard and put my heart into it.”

With few MMA competitors in the region, Osman competed in Muay Thai events. That is, until ONE Championship came calling. The Malaysian made her professional debut at ONE: TOTAL DOMINATION in late 2013, dropping a hard fought decision to Sherilyn Lim.

Osman quickly rebounded and, living up to her “Athena” moniker, went on the warpath. She tore through her next three opponents, winning her next three fights by stoppage, with two submissions and a TKO.

With MMA growing in Malaysia, Osman, who is also Muslim, found her star on the rise due to her fighting ability and background.

“MMA in this region was new, so a lot of media outlets in and out of Malaysia were interviewing me,” she says. “People also think that because I am a Muslim woman I should not be parading myself or fighting.

“Those are the things that attract media other than me being the first female fighter from Malaysia with ONE. It is not always easy. The first few years were crazy.”

The heroine cleared her biggest test to date last year in the run up to her bout at ONE: DYNASTY OF CHAMPIONS (HEFEI). It was the first time the martial artist prepared for a bout during the Muslim fasting month of Ramadan.

“When you really want that win, you do not care about what you are going through,” she explains. “We adjusted my schedule to accommodate for Ramadan. Most of my training came after breaking my fast. I would have coffee, an apple, and a hard boiled egg, train, and then have dinner.”

She wound up winning that fight against Egyptian Haiat Farag via armbar. With her star continuing to rise, Osman returns to the cage on Friday Night, 10 February, at ONE: THRONE OF TIGERS where she will face promotional newcomer Vy Srey Khouch in a strawweight battle.

The Cambodian is a Kun Khmer Flyweight Champion who holds a perfect 2-0 record and is looking to make an impression by toppling the crowd favorite.

This bout brings Osman back to Kuala Lumpur. Only this time, she is no longer an amateur. She is a surging prospect who is competing in the premier MMA organization in all of Asia.

Everything has come full circle, except this circle has gotten a whole lot bigger.