Posted by ONE Championship on Tuesday, February 21, 2017

Huang is set to challenge inaugural ONE Women’s Atomweight World Champion Angela Lee for her coveted title in the main event of ONE: WARRIOR KINGDOM. The card broadcasts live on Saturday Night, 11 March, from the Impact Arena in Bangkok, Thailand.“I am really shocked. It means nothing is impossible,” she says. “The champion Angela Lee is a well-rounded fighter, so it is an honor to have an opportunity to fight against her.” 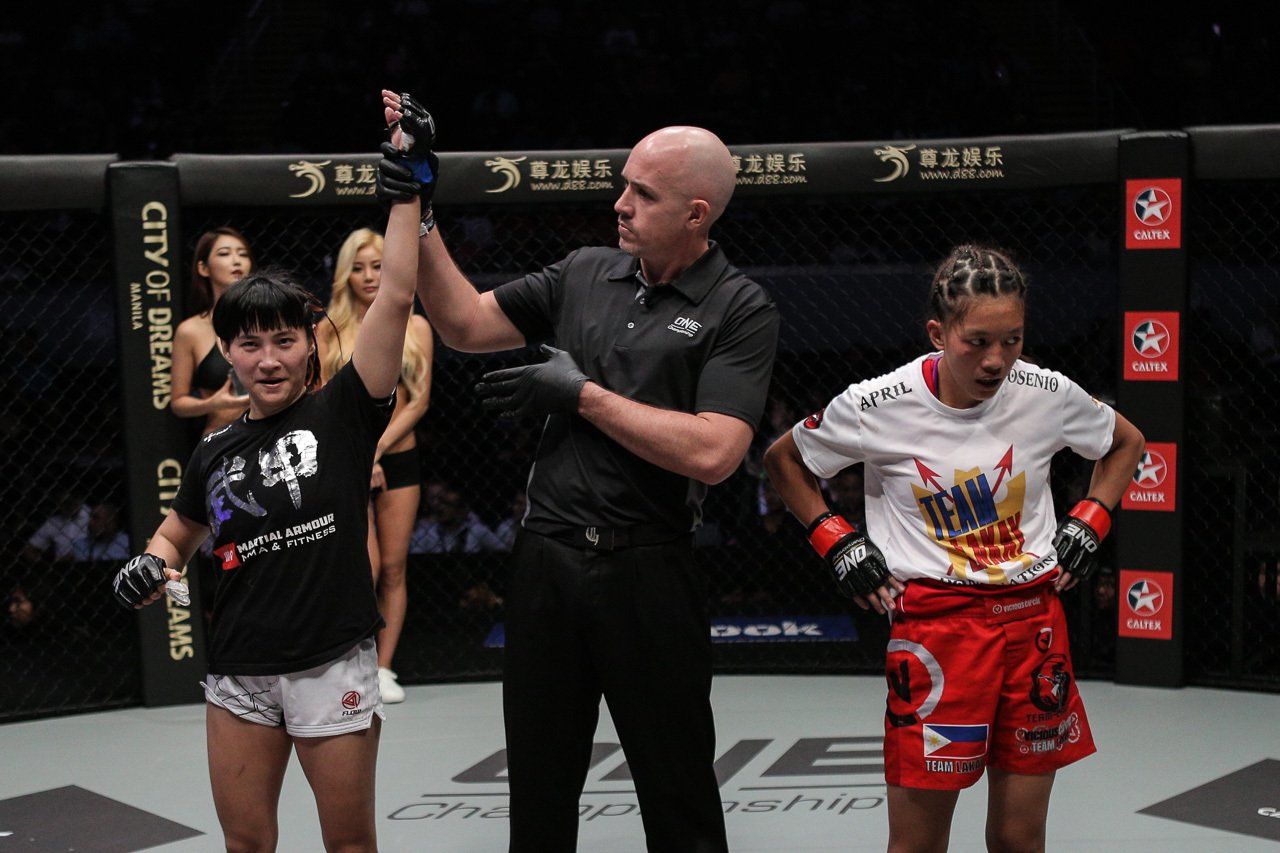 With the title bout set, Huang decided to make some important life changes. The atomweight left her longtime gym, Martial Armour in her native Chinese Taipei, and relocated to China to be part of Tianjin Top Team, which features fellow ONE competitors Li Kai Wen, Xie Bin, and Ma Jia Wen.

The Taiwan native made the jump for two reasons: “First, Tianjin Top Team has good training systems. I came to learn many martial arts, and train with the many great pro MMA fighters. Second, it is sad about the environment in my hometown. A few people have made the MMA business like Game of Thrones. It is not easy to be a pro MMA fighter there.”

Though it was not an easy decision to pack her bags and move to Northeastern China, Huang believes the sacrifices she is making will prove to be worthwhile because she wants to return to Chinese Taipei as a World Champion, and most importantly, make her family proud. More specifically, her parents. 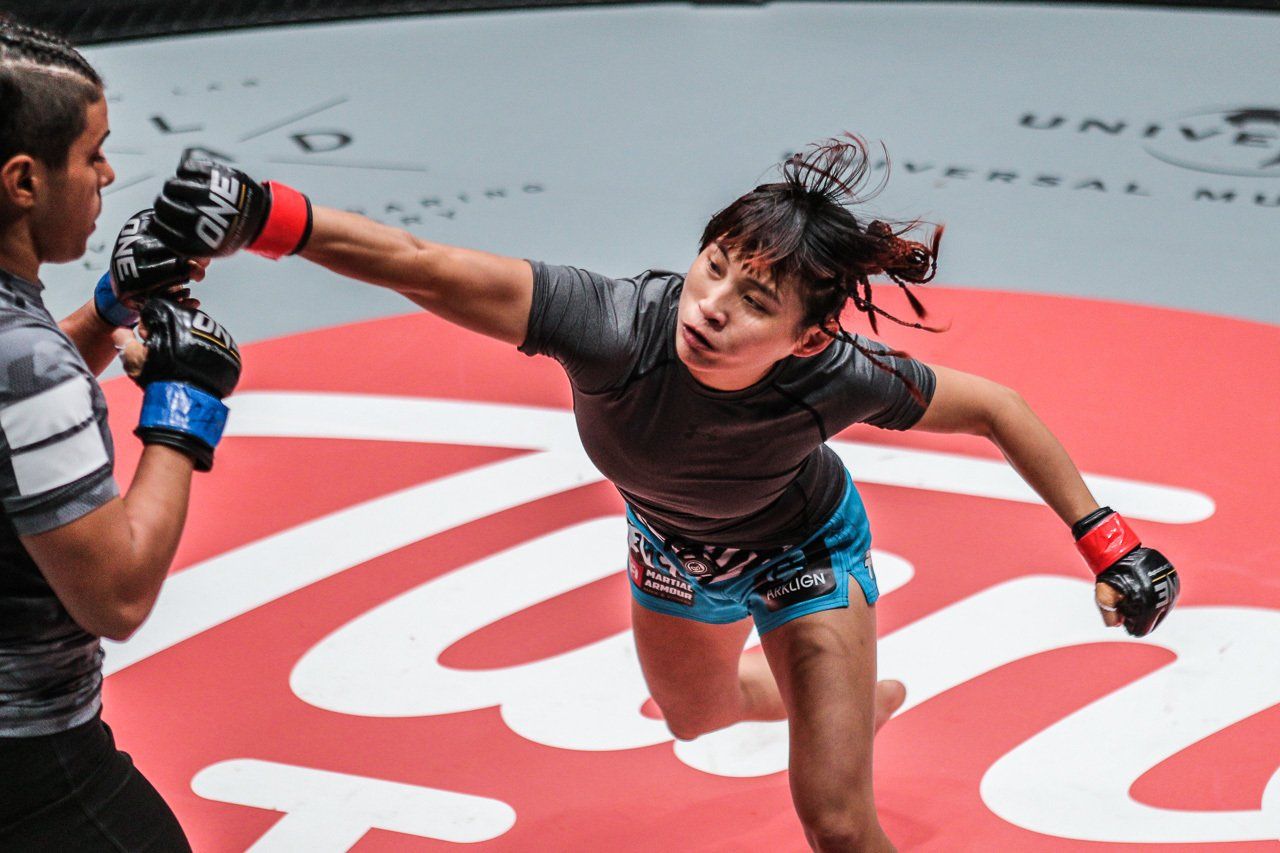 Truth be told, she has always had a difficult time obtaining her mother and father’s approval when it came to her martial arts pursuits.

As a child, Huang was hooked on martial arts cinema and often mimicked Jackie Chan’s fight choreography. For young Jenny, she yearned to learn something — anything — and desperately tried to make that happen. She initially attempted to practice taekwondo and attended a pair of classes with her younger brother. Her father, however, pulled the plug on that immediately.

“My father thought I should be an elegant girl, and just study and be smart,” she recalls.

Ironically, it was in school where Huang would excel in the martial arts. When she was 12, a friend invited her to train in judo. She honed her craft in junior high and made the high school judo team, earning her black belt along the way.

That only further fueled her love for martial arts, and eventually led her to MMA, where she could master all of the disciplines she wanted.

Using judo as a base, she made her professional debut in May 2015, and has since rattled off five consecutive victories. That includes her most recent win, where she submitted Team Lakay’s April Osenio via gogoaplata in the second round at ONE: AGE OF DOMINATION last December. It was a performance that won her ONE’s Submission of the Year 2016 honors.

Nevertheless, even though the number one contender has become a modern-day action star in Asia’s premier MMA organization, not having her mother and father’s approval still stings.

“My parents do not understand my MMA career,” she says. “They just want me be a normal girl. This is one of reasons why I am training so hard. I want to prove myself to my parents and have them be proud of me. I want to be myself. I do not want someone to tell me who to be.”

Huang can accomplish that, and much more, by defeating Lee for the belt at ONE: WARRIOR KINGDOM. But that will be much easier said than done. After all, the champ is nicknamed “Unstoppable” for a reason.

Also undefeated, Lee has become the top draw in ONE Championship. Since her debut back in 2015, the 20-year-old heroine has won all six of her matches. The first five came by submission, with the sixth seeing her edge out Japanese champion Mei Yamaguchi in a Fight Of The Year thriller for the inaugural ONE Women’s Atomweight World Championship. But that does not deter Huang. In fact, it motivates her. The Taiwanese judoka is confident in her abilities, and plans to formally introduce the world to the martial artist she truly is at ONE: WARRIOR KINGDOM.

“I am very confident. I believe in myself. That is what I learned from my last fight. I know I will fight amazing this time also,” she says with conviction. “I am very grateful ONE Championship believes in me and gave me this opportunity.

“It is time to show people who Jenny Huang is. You never know the result because I am unpredictable.”