Christian “The Warrior” Lee knows he is a rare breed among mixed martial artists.

About two weeks ago, the ONE Lightweight World Champion received a call asking if he would like to step in to face Saygid “Dagi” Guseyn Arslanaliev this Sunday, 13 October at ONE: CENTURY PART I.

Although his opponent has proven himself as one of the most dangerous men in ONE Championship, the 21-year old Singaporean accepted the ONE Lightweight World Grand Prix Championship Final match-up with barely any hesitation.

Lee believes with absolute certainty he will be ready to take on a dangerous man who has won his last three bouts by first-round knockout because of the way he trains hard every day – whether a bout is booked, or not.

“It comes down to the lifestyle,” Lee explains.

“A lot of fighters will start training when they get a fight offered. I like to take the approach of just being a true martial artist, and training year-round. When the opportunity comes, I’ll be ready.”

The mindset originates from “The Warrior’s” father, Ken, who introduced his son to martial arts at an extremely young age.

Discipline and dedication were two of the core values he instilled in his son from the first time he set foot on the mats, and he has lived by them until today.

“Growing up in a martial arts family and growing up as a martial artist, training has just always been a part of my life,” the Evolve and United MMA representative says.

“Even when I don’t have a fight booked, I’m in the gym every single day. I’m training the fight team – I’m teaching the kids and the adults at night. There’s not a single day that goes by that I’m not in the gym. That’s definitely a big benefit for me.

“A lot of people want to see the reward first before they start working for it. Just the way that I’ve been trained and taught my whole life is to train in silence, and let your hard work do the talking.”

Even someone as focused as Lee has his bad days when he wakes up and thinks it might be easier to sleep in a little, or perhaps enjoy a day of laziness away from the gym.

However, it does not take him long to snap out of that mindset because he knows that forcing himself to show up on those days could ultimately be the most beneficial to his growth. While others might give in to temptation, he is still hard at work.

The discipline the ONE Lightweight World Champion applies to his training schedule crosses over into other aspects of his life, including his nutrition.

As a natural featherweight, the Singaporean has always had to keep an eye on his diet to make sure he does not get too heavy.

Lately, he has been able to indulge a little bit more because of the allowance in his current division, but that only makes him want to push harder when he is at the gym.

“I do love to eat, that’s a fact,” Lee says with a laugh, “but I also train like four to six hours a day, every single day, even when I’m not in fight camp.

“I feel like that helps to keep the weight off and keep me in optimal fight shape year-round. That’s just how I live my life every day.”

There is one exception to the rule. If all goes to plan and he gets the job done against “Dagi” at the Ryogoku Kokugikan, “The Warrior” will allow himself to celebrate and indulge before he returns to normal in the following days.

“I’m going to find the nicest steakhouse there is afterward and treat my whole family to it,” Lee says. 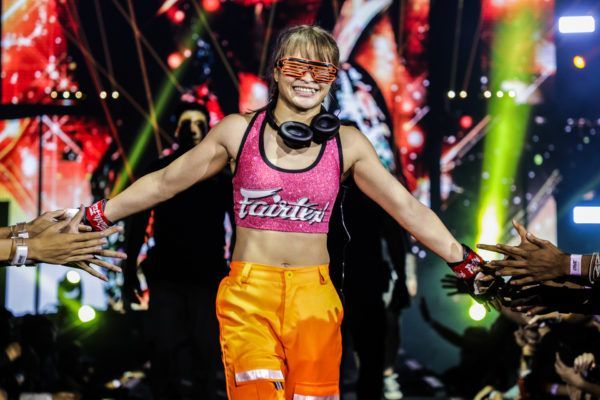