Posted by ONE Championship on Monday, February 20, 2017

Shannon “OneShin” Wiratchai knows how to stand out in a crowd.

The 28-year-old Bangkok native knows all about the importance of showmanship, what it brings to an event, and how it can positively impact an athlete’s career. It opens up an athlete’s appeal to more than just hardcore fans, and usually leads to crossover mainstream success. And, in parts of the world where ONE Championship is pioneering major shows, this element is even more crucial. 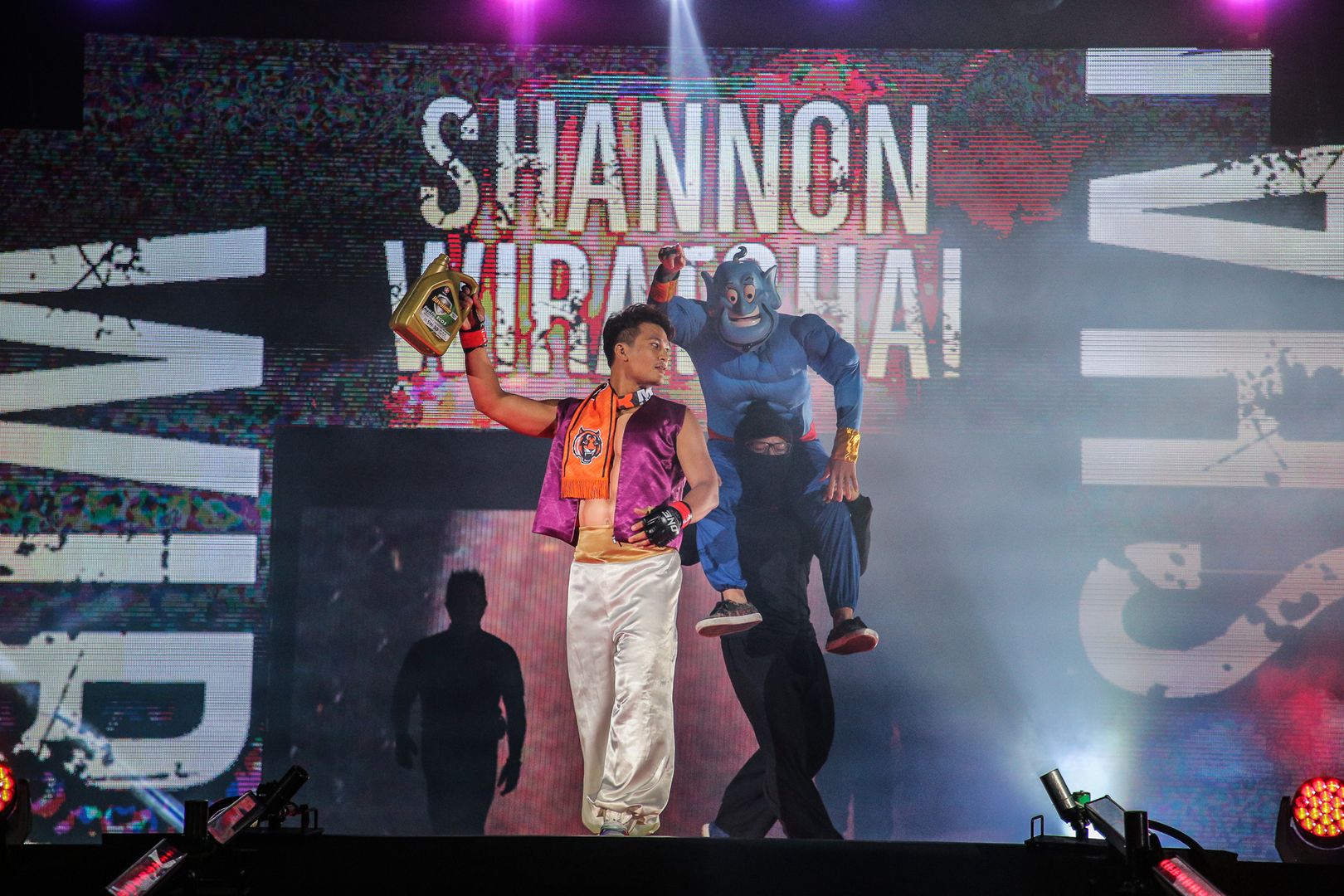 For Wiratchai, who grew up watching the world of professional wrestling, he had always imagined making grand entrances for his walks to the cage.

“When I was young, I dreamed of being a pro wrestler. In my time, there were so many different kinds of characters. Some guys did kung fu, some guys did karate, it was not just wrestling,” he explains. “I dreamed of showing the world Thai culture such as Muay Thai, and wondered why they did not have that in there.”

So, unlike most competitors, who treat an entrance as just a necessary part of the bout process, it was a primary concern for Wiratchai. When the Thai lightweight became interested in mixed martial arts, it was the bright lights and fireworks of Japanese promotions that first attracted him, and that is where he found inspiration.

“One of my idols is Genki Sudo. I loved to watch his walkouts. I think the walkout is a good way to get the hype up for the people watching. If you are a fan, you know the fighters and their backgrounds. But if you are new to mixed martial arts or that event, you just see two fighters competing against each other. You have no idea at all,” he says.

“The walkout is the first thing people see. It gets the hype up, they want to see the fight, and they will get into the fight easier because you have done this.”

Every athlete has a story to tell. Every match has its own narrative. The culmination of all the hard work and sacrifice endured over the weeks prior to a bout is a tale in itself, so there is always an angle where one could develop some theatre. That is something “OneShin” tries to convey when all eyes are on him. For example, riding a dinosaur did have a comedic effect on face value. “Who has ever ridden a dinosaur to the cage before?” jokes Wiratchai.

However, behind that was a political message. The dinosaur represented the old traditions and views encountered when the Thai faced off against Kyal Linn Aung of Myanmar at ONE: KINGDOM OF CHAMPIONS in May 2016. A centuries old grudge between the two nations had reared its ugly head when the fight was announced.

“When the bout was announced, Thai fans were telling me to ‘Kill him’, and I was like, ‘What?’ In Thailand, the dinosaur is also a symbol of old fashioned ideas, so when I chose to ride the dinosaur, I put on a Thai ancient soldier outfit,” he details.

“I wanted to show people that I was coming out with an old idea, but when I reached the cage I was going to throw that idea out. It is only me, my gloves, and my opponent in the cage, and we fight in a noble way. That is the modern way. No more fighting over politics. That was the idea.” Those entrances have only become more extravagant. At ONE: UNBREAKABLE WARRIORS last September, he mimicked the highly-popular Pokemon Go! craze, and followed that performance up with a scene out of Aladdin at ONE: WARRIOR KINGDOM in March, all of which brought the capacity crowd to their feet.

Ultimately, for all the entertainment he provides, it would be fruitless without being able to back it up in the cage. Elaborate costumes would simply be a distraction if Wiratchai was not performing with his skills. After all, we go back to the primary objective, which is to win inside the cage.

Fortunately, he is doing both. He holds a professional record of 7-1 (1 NC), and is riding a five-fight win streak with four finishes against some tough opposition. This proves he is not neglecting his skills. He is exciting and effective in the cage, and that is why he is edging closer to a title shot at the ONE Lightweight World Championship.

All of the build-up would be for nothing otherwise. His heart is set on reaching the top, and if he can entertain along the way, then it is a bonus.

“I want to prove to myself and others that I am not just staying around to be a Thai icon, and just be there for that reason. I want to move up.”

“OneShin” will face off against renowned brawler Rob Lisita at ONE: KINGS & CONQUERORS on 5 August in Macau, and that is a bout that would move him in the right direction. Lisita (14-9) may not be on his best run of results, but he has consistently operated in the upper echelons of the lightweight division.

“He is one of the big names,” Wiratchai offers. “Maybe he is on a losing streak, but they are to the top contenders, all very high-level fighters. I think it is a good step for me to put my name into that list of highly-ranked fighters.”

With his current momentum, it is no wonder Wiratchai has confidence, even against a very dangerous opponent who showed good form against former title challenger Ev Ting last September. It is exactly the kind of test the Thai pioneer needs to break through to the next level, and show he is not just a showman, but the full package.

“Rob is a tough guy, and the fans still want to watch him,” he says. “It is going to be fun. I am rising up, and it is time for me to prove myself.”

As he prepares to prove himself, it is a good bet Wiratchai is also getting ready to make another sensational entrance that will get the Cotai Arena, and the rest of the world, buzzing.