Victoria “The Prodigy” Lee – younger sister to ONE World Champion duo “Unstoppable” Angela Lee and Christian “The Warrior” Lee – is set to make her much-anticipated sophomore appearance in ONE Championship.

Before she aims for her second straight victory, Lee reveals how she balances school and training, how her World Champion siblings have guided her, and her goals in ONE Championship.

A myriad of adjectives could describe the talented teenager, but “disciplined” might sum her up best.

That’s because Lee is not just preparing for her second bout in ONE Championship – she’s also continuing to grind in another key area of her life.

“Both training and schooling are a part of my daily routine,” she says.

“Now that my schooling is online, it is very manageable to keep up my grades as I am preparing [for my next fight].”

Of course, the two-time Pankration Junior World Champion admits that not everything has been easy to manage on the global stage.

“Well, the training I’m used to because I’ve been competing all my life, but I would say the interviews and the media is a little new to me,” Lee offers.

Despite her schedule being booked with school, training, and the occasional interview, Lee does find time to unwind and enjoy life.

When she has downtime in the beautiful state of Hawaii, the United MMA representative loves to spend time in the kitchen and near the ocean.

“Aside from training, I love to cook and bake. I also love spending time with my four dogs, and when I get the chance, I like to go to the beach,” she says.

In fact, every time her brother or sister competes in ONE, Lee takes to the kitchen to whip up her family’s favorite dessert.

“I love to bake them cheesecakes,” she adds.

At United MMA, Lee has found success under the tutelage of her father and siblings. That included becoming the 2019 Hawaii State Wrestling Champion, although her international accolades hold a special place in Lee’s heart.

“I would say I take the most pride in winning my [Pankration] World Title because there were so many high-class competitors coming from all over,” she offers.

“It was an international tournament, and that was the tournament that really helped me decide that [turning pro] was the path I wanted to take.”

Along the way, Victoria was inspired by the journeys of her older siblings.

Angela and Christian may be role models for fans around the globe, but their greater admirer is Victoria, who’s witnessed their success from up close.

Moreover, the two World Champions have guided their younger sister to follow her own dreams.

“My brother and sister are both super supportive of me, and they helped me in so many ways,” Lee says.

“Being able to experience watching them train during their fight camps and watching them fight and compete really shows me how much work ethic and dedication goes into becoming a professional athlete.”

The success of all three siblings is remarkable, but they’ve all stemmed from father Ken, who’s kept his talented children focused and humble while pursuing greatness.

“It is very important to me to have a strong family bond because they are my biggest support system and will always keep me grounded,” Victoria adds. 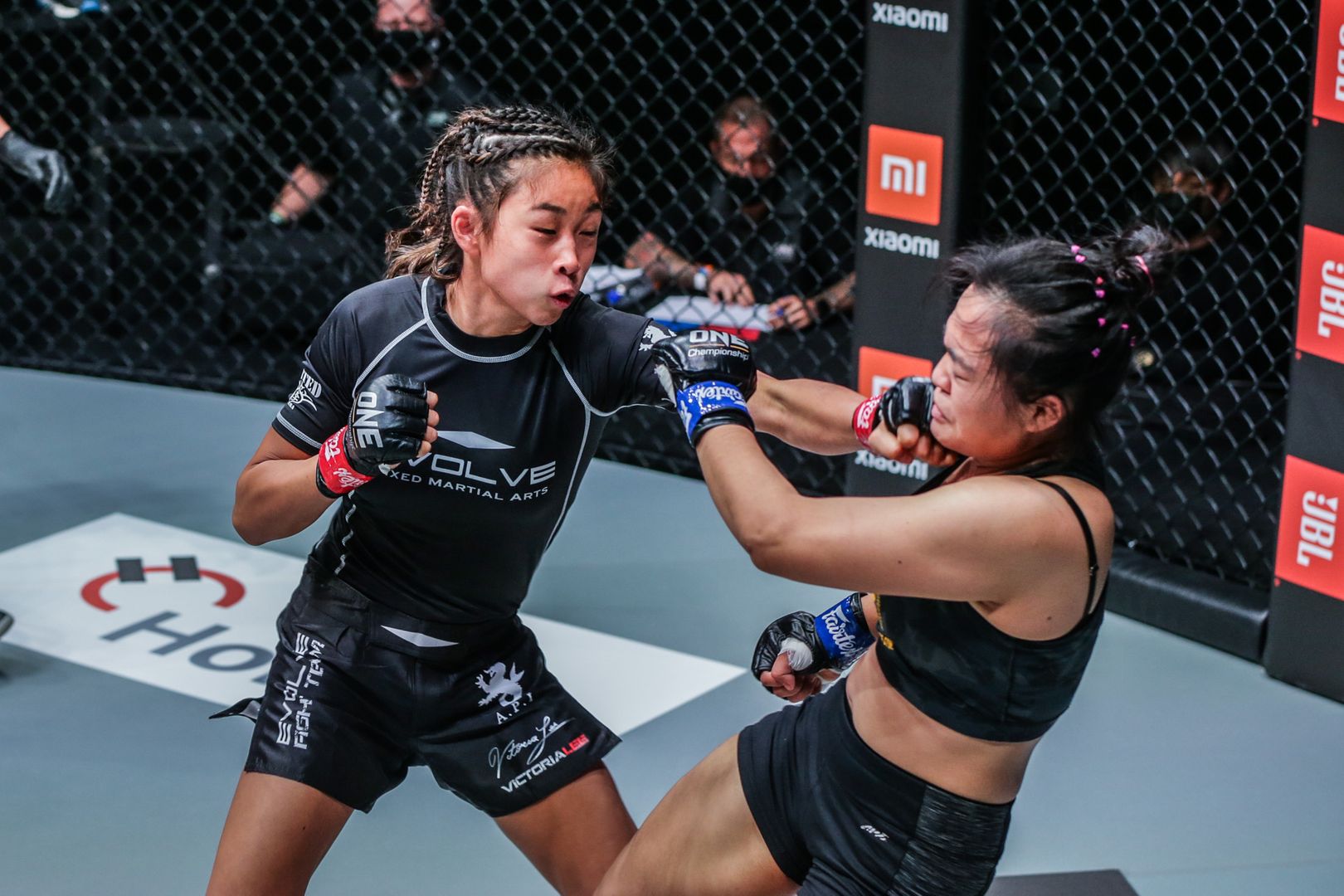 Mixed martial arts fans around the world got a taste of Lee’s incredible skills this past February at ONE: FISTS OF FURY.

“The Prodigy” scored a second-round rear-naked choke submission of Thailand’s Sunisa “Thunderstorm” Srisen at the Singapore Indoor Stadium to make a dominant entrance into The Home Of Martial Arts.

“My debut went well,” Lee says, “but it could’ve also gone better. And I plan on improving my skills and showcasing a better performance for my second fight.”

That fight will come against Wang, a more experienced competitor who will be looking to capitalize on Lee’s fame in her promotional debut.

But the teenager has her own plans, which include becoming the second Lee to hold the atomweight gold.

“Of course, my long-term goal is to eventually become a ONE World Champion, but in the meantime, I’m just trying to improve my skills and become a better martial artist every day,” she says.

There’s only one question that remains. If Lee wins her bout at ONE: BATTLEGROUND, who’s going to bake her a cheesecake?