“No.1” Nguyen Tran Duy Nhat has emerged as a rising star in ONE Championship, but long before he appeared on the global stage, he was pioneering a movement in Vietnam.

The 31-year-old has helped build the country’s Muay Thai scene from the ground up by dominating national competitions and opening one of the first gyms in Ho Chi Minh City – a gym where he has been developing the superstars of tomorrow.

It’s not easy to juggle blossoming athletic, business, and coaching careers, but Duy Nhat seems to do it effortlessly. The star has a burning desire to popularize the sport in Vietnam, and he’s seeing that vision come to light.

This is how Duy Nhat has helped unite martial arts in Ho Chi Minh City through No.1 Muay Club.

An Early Love Of Martial Arts

Martial arts have always been in Duy Nhat’s blood.

As a descendent of a martial arts master who founded the Vietnamese discipline of Tan Gia Quyen, it is no surprise the future superstar gravitated toward combat sports.

He started practicing martial arts at the tender age of 3, and then he started competing in junior tournaments when he was 14.

In 2007, however, his journey drastically changed. Duy Nhat left his hometown in the Lam Dong province to further his studies in Ho Chi Minh City, and one evening, the then-18-year-old college kid watched a movie and discovered “the art of eight limbs.”

For him, it was love at first sight.

“I felt that Muay Thai was similar to the martial art that my mom and dad used to fight in the ring, so I decided to learn Muay Thai.”

Although he was turning into a local star, “the art of eight limbs” was not particularly big in his homeland during that time.

“Those wins helped get my name in newspapers. By then, there were no Muay Thai gyms at all! Muay Thai was still something that wasn’t so popular in Vietnam,” Duy Nhat explains.

“The first Muay Thai gym in Ho Chi Minh City only opened in 2010, but it was limited to a few chosen athletes. If there was a word to describe it, I’d say it was ‘empty.’”

Recognizing the void and seeing the need for an authentic Muay Thai gym open to everyone in the Vietnamese city, Duy Nhat formed his own academy, No.1 Muay Club.

“No.1 Muay Club, since it was opened, is how I made my own dream come true,” he continues.

“I wished more people knew about Muay Thai. I wished the gyms would be open for anyone, not only the selected athletes’ team. I dreamed about having my own Muay Thai team, who shared my dedication and passion. I wanted to train champions who were going to bring belts and medals to our country.” 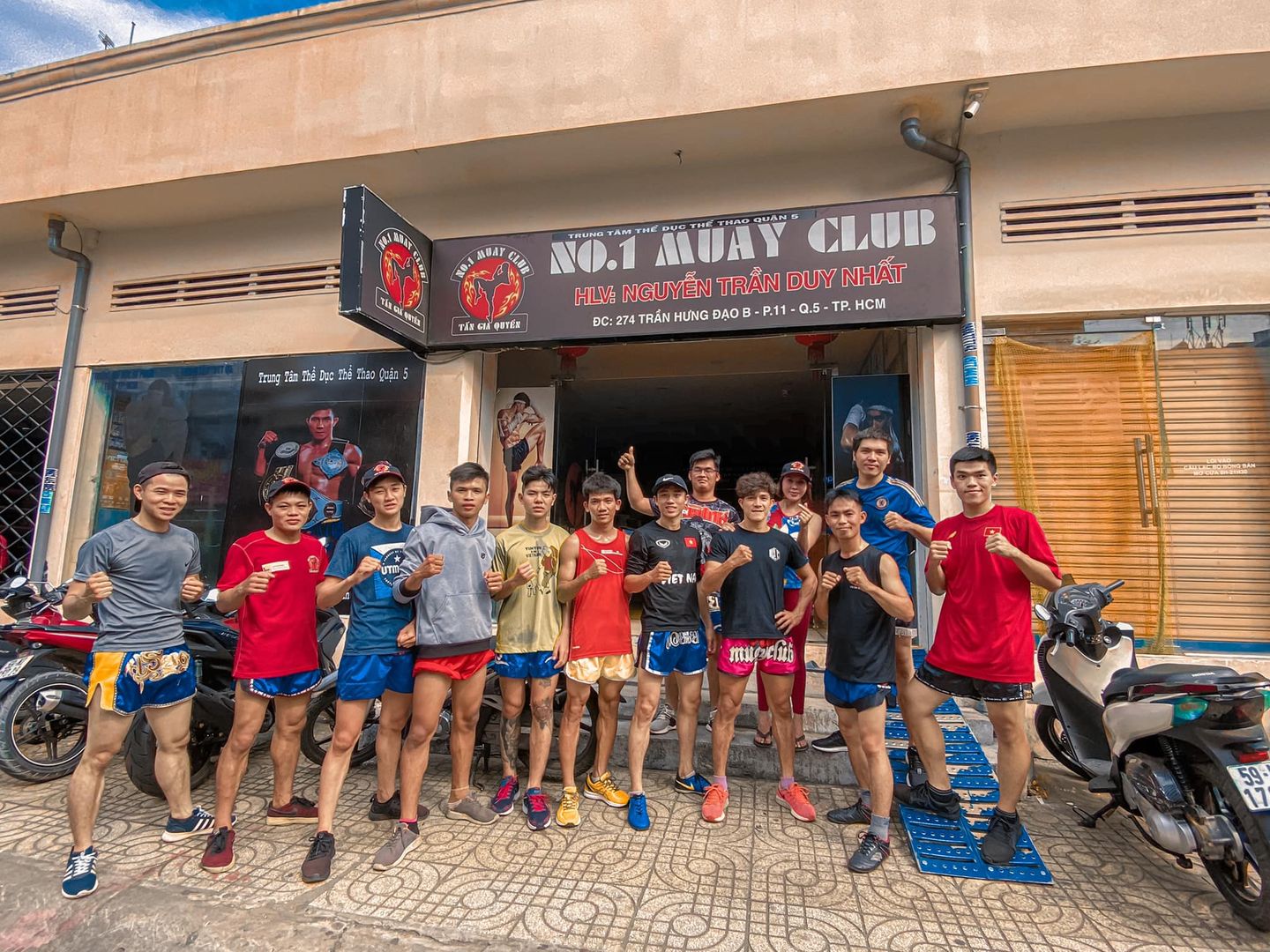 Making the transition to gym owner and head coach was not particularly easy for Duy Nhat, who was also an active competitor reaching his prime.

There were lots of things the Vietnamese superstar needed to take care of before his grand opening. He needed to find a good venue, design the brand, build out the facility, hire quality staff members, and advertise his new venture.

Those presented several different headaches and complications to the man known as “No.1.”

“I’m not really a businessman – I’d rather count on myself as a fighter instead,” he confesses.

“What if I didn’t have enough customers to pay the rent? What if my coaches didn’t please the clients? What if I did not care enough for a teammate who has a fight ahead and that makes him lose? I had all these things to worry about, so I just tried my best in every role I had to play.”

With the help of friends, family, and the local media, Duy Nhat was able to knock down all those tasks.

In September 2014, he opened No.1 Muay Club at 1st Huyen Tran Cong Chua Street, District 1 in Ho Chi Minh City, and he made sure the facility appealed to all types of individuals through a shared love for “the art of eight limbs.”

“At No.1 Muay Club, everyone focuses on Muay Thai. Even if you want to be a pro fighter, an amateur, or just train to lose weight, once you joined the team, you found the passion for Muay Thai.

“Plus the coaches’ quality, a reasonable price, and the way teammates support each other are the reasons people have trained at No.1 Muay Club.” 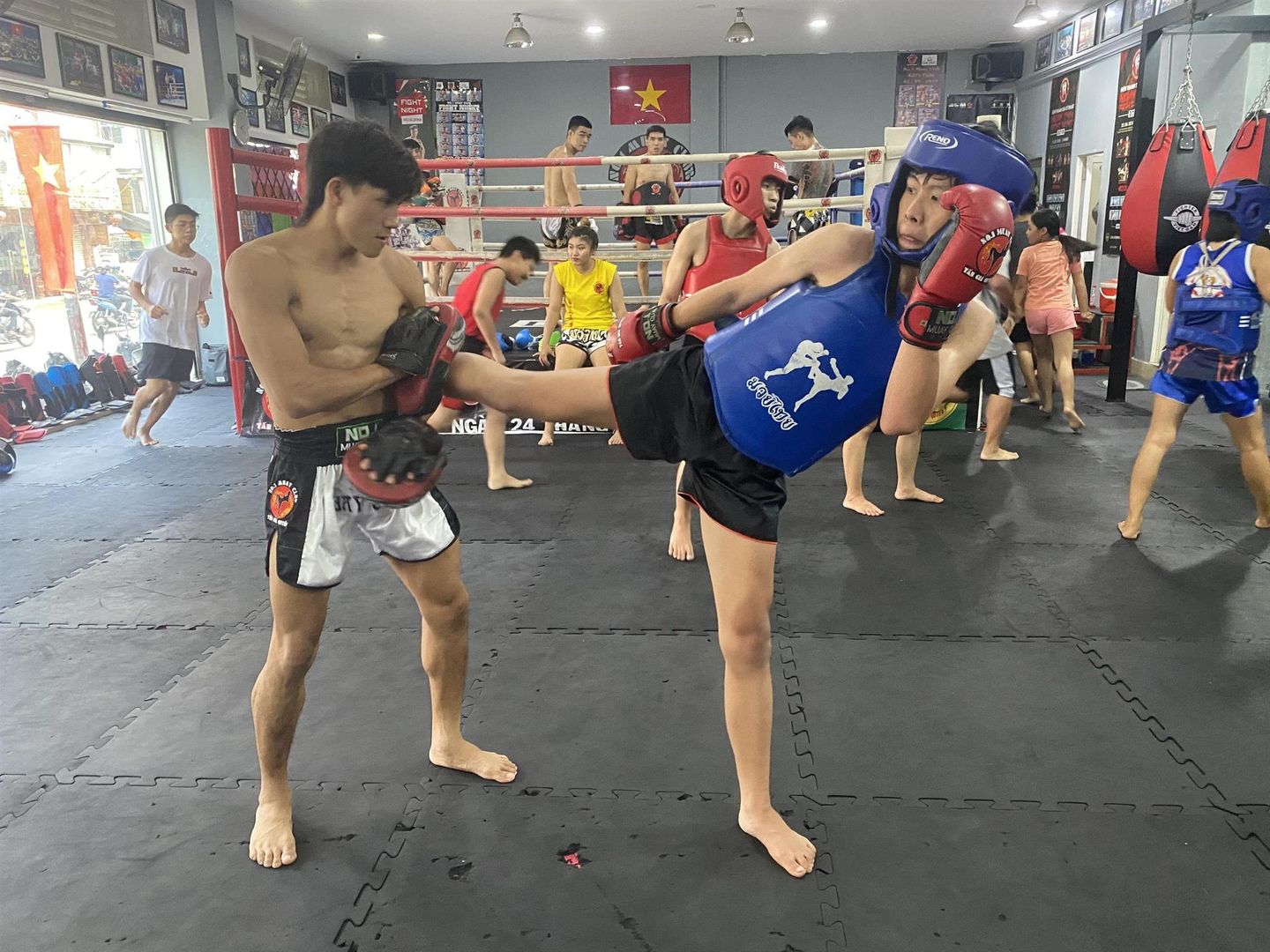 Given that No.1 Muay Club was one of the first Muay Thai gyms established in Ho Chi Minh City, it was bound to experience growing pains along the way.

So, even as Duy Nhat developed homegrown talent, built a fight team, and recruited some of the best trainers in the region, he suddenly saw his burgeoning empire begin to crumble.

“There were many fighters – ones who we taught and cared about a lot – who left the team,” he says. “Also, there were coaches who complained, and there were months where I did not have enough income to pay rent.”

But Duy Nhat wouldn’t let those hardships break him.

With the support of his family and friends, he continued pushing forward, competing in game shows and winning more Muay Thai competitions – including consecutive national titles and the Asian Beach Games Muay Thai gold medal in the men’s featherweight division.

By 2016, that dedication had begun to pay off. Duy Nhat’s success was creating a buzz about both himself and No.1 Muay Club in the local community.

“People started knowing more about Muay Thai,” he says. “They knew there was a guy named Nguyen Tran Duy Nhat, and that brought more people to my gym.”

Thanks to his newfound popularity, he rebuilt his team, worked through his employees’ problems, and managed to bring in more and more clientele. Paying rent would never become a problem again.

A lot changed in the years that followed.

In 2017, Duy Nhat opened a second No.1 Muay Club location in District 5 of Ho Chi Minh City, classes now run for 15 hours each day, and the gym hosts a bi-annual event, “No.1 Muay Club Fight Night,” where athletes from other gyms in the local community have the chance to compete and document their progress.

On a personal level, Duy Nhat saw his popularity skyrocket further when he officially joined ONE Championship in 2019.

The flyweight competed on the promotion’s inaugural Vietnam card, ONE: IMMORTAL TRIUMPH, in Ho Chi Minh City, where he knocked out Malaysia’s Azwan Che Wil in highlight-reel fashion last September.

He followed that up by knocking out Yuta Watanabe with a head kick at ONE: EDGE OF GREATNESS in Singapore last November.

Both of those performances elevated his profile, which in turn benefited his gym and team.

“Being a part of ONE Championship is just great,” Duy Nhat says.

“I have a chance to clash with other fighters and see their techniques. That brings valuable lessons to me and my team. I hope that one day we will have more fighters join ONE.

“Also, the media visits me more now because of it. I have to thank them a lot since they help No.1 Muay Club build a reputation all over the world.”

These days, Duy Nhat is looking toward the future – both in his athletic and business careers.

The Vietnamese superstar has expressed his desire to challenge ONE Flyweight Muay Thai World Champion Rodtang “The Iron Man” Jitmuangnon for the divisional gold, and he wants to open more No.1 Muay Clubs in every district of Ho Chi Minh City while continuing to build his team.

“Let’s dream big. I wish for No.1 Muay Club to become a name that people always think about when they mention Muay Thai in Vietnam. Our chain is going to include 15 gyms, with a giant number of excellent fighters. By that time, Muay Thai should be something awesome in Vietnam.”

Read more: 3 Tips To Boost Your Confidence In The Gym