On 26 February, Jackie Buntan will step onto the global stage for the first time at ONE: FISTS OF FURY. Standing across from her will be rising Thai star Wondergirl Fairtex.

The 23-year-old Buntan is eager to steal the spotlight from the Fairtex representative, which means utilizing the Muay Thai techniques that kept her on steady footing during a rough period of life.

Ahead of her ONE Super Series debut at the Singapore Indoor Stadium, the talented American details her turbulent journey.

Buntan, the youngest of four siblings, was born in Southern California in July 1997. Her older sisters were all born in Manila, Philippines, to parents Jessie Buntan and Rosalie Saenz before the family moved to the United States.

Growing up, the first-generation Asian-American loved being outside and would try to emulate her siblings in every type of activity.

“Since I’m the youngest, of course, whatever my older sisters did, I would get influence from it,” Buntan says.

“I would always try different things. For a period of time, I was really into longboarding. It’s similar to skateboarding. My oldest sister and her boyfriend would longboard a lot, so that’s what got me into it.”

That connection with her sister and boyfriend would eventually lead Buntan to discover the world of martial arts. Chris, now Buntan’s brother-in-law, trained as a hobby. And after Jackie was shown how to throw a roundhouse kick, the seed was planted for a future passion.

“I was like 11 at the time, and I thought it was the coolest thing ever. I wanted more,” she says.

First, Buntan had to find a place to train. So she scoured the internet and eventually found her way to Boxing Works.

“The only close gyms were either karate or taekwondo gyms, and it didn’t really interest me,” she recalls. “I just Googled the closest gym near me. About 5 or 6 miles away, I found Boxing Works and [head coach] Bryan Popejoy, and I’ve been with him and that gym ever since.”

A Lifeline Amid Struggles

As a young child, Buntan never dealt with any money-related problems. But things took a drastic turn as she got older.

“Growing up, I was very lucky. I grew up on a very wealthy side. I lived with my mom, sisters, and stepdad (Chris),” she says.

“My mom and stepdad were going through a difficult financial situation, but we were still afloat. It wasn’t until I got into eighth grade that they got into really bad financial struggles.”

Ultimately, those struggles had devastating effects on the family.

“We ended up moving out of our house,” Buntan continues. “Our college fund, our cars, we literally lost everything.

Fortunately for the young martial artist, training at the gym provided her with an escape and some much-needed structure.

“I probably didn’t even fully understand the situation until I was halfway through high school. At the time, from about 11 to 13, I was in the gym consistently for a kid. That was the only thing that kept me going,” Buntan says.

“I looked at Muay Thai as a sense of stability. Because in training, you have a set schedule and do things kind of the same every day. When we lost everything, with my parents and siblings being older and more mature than I was, it affected them a lot more than it did me at the time. I just really felt Muay Thai was that outlet for me.”

As the family battled through those challenging times, Buntan stayed focused on her training.

“My coach didn’t even know that happened. None of my teammates, no one from my gym knew that ever happened,” she says.

“I was like, ‘If I can keep training and keep the same passion for this sport despite having something catastrophic like that happening, then this is what I should be doing in life.’”

While being tested by her family’s hardships, Buntan was also preparing for her first tournament.

It was a tough situation, but things were much easier with Popejoy in her corner. Buntan would go on to win the tournament, which strengthened the bond with her coach. It’s a bond built upon trust, understanding, and friendship.

“He’s not only a coach, but a great friend to me. I really can’t picture my life without him in it,” Buntan says. “And that just goes from him being extremely understanding and patient of you as a fighter and as a person, which I think is pretty rare in this sport, especially.”

One key to Popejoy’s success is his ability to get the best out of his students.

“I’m extremely grateful to have him as a coach because he does not try to change you as a person or an athlete or a fighter,” Buntan adds. “He will see your strengths, your weaknesses, your style, and he will work off of that, and he will try his best to better whatever you want.”

The American also notes Popejoy’s ability to process information from all disciplines and implement them into her strategy.

“Being quite the Muay Thai nerd and Muay Thai genius he is, he’s not only looking at Muay Thai fights,” Buntan says. “He’s looking at other styles as well.

That ability to get inside of Buntan’s head has played a vital role in her rise through the Muay Thai ranks – a rise that’s carried her all the way to ONE Super Series.

“That adds a ton of confidence,” she says of Popejoy’s methods. “Not only in myself, but in him as a coach, which just translates over to the big night when you’re in the ring competing.”

Big Dreams On The Global Stage

The adversity that Buntan has faced outside of competition will only fuel her once the bell rings on 26 February. That night, she will step onto the global stage against a fearsome opponent and show the world exactly what she’s made of.

Buntan is fully focused on winning the strawweight battle against Wondergirl, but she has even bigger dreams.

“A World Title is my No.1 goal,” she says. “And to get there, I am not looking for a shortcut. I’m willing to prove, especially to myself, why I deserve to be the World Champion, and I want to show the world that as well.”

It won’t be easy, but given what Buntan has already achieved in Muay Thai – especially in the face of struggle – there should be no doubting her future ambitions. 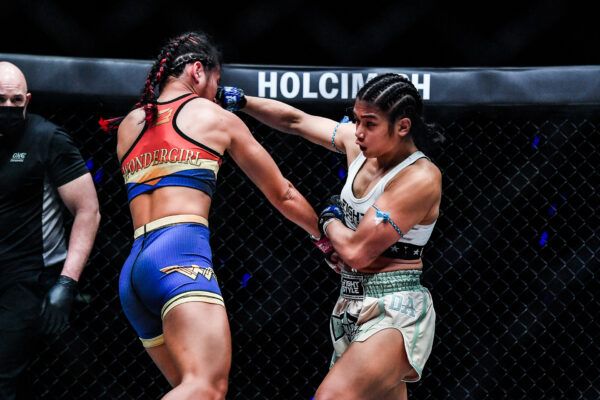