Christian “The Warrior” Lee (9-2) has spent every second of his professional career competing inside the ONE Championship cage, and put on some thrilling performances in the process.

The 20-year-old has finished every bout he has won inside the distance, and he has done so with a variety of methods.

The Evolve representative returns to action against Team Lakay featherweight Edward “The Ferocious” Kelly (10-5) at ONE: BEYOND THE HORIZON in Shanghai, China, on 8 September, where he will look to get another stunning stoppage victory.

Before he returns to action, the Singaporean star reflects on the three favorite finishes of his career.

Christian Lee’s journey to challenging for ONE gold on 18 May started with this blistering debut.

Christian Lee’s journey to challenging for ONE gold on 18 May started with this blistering debut.Singapore | 18 May | TV: Check local listings for global broadcast | Tickets: http://bit.ly/oneunstoppable18

Posted by ONE Championship on Thursday, May 3, 2018

While most high school seniors were preparing for exams, 17-year-old Lee stepped into the ONE cage for the very first time.

In December 2015, “The Warrior” made his mixed martial arts debut at ONE: SPIRIT OF CHAMPIONS in Manila, Philippines. He faced David Meak in the card’s opening contest, and admits he went through a range of emotions.

“I was very excited, and I was very nervous for my first fight,” he remembers.

“I went in there, and I stayed composed. I trusted in my training, and the fight just played itself out. I went out there, and I found a home for my left hook, and that is what I ended up finishing him with.”

The end came at just 29 seconds into round one. Lee walked Meak down with an assortment of strikes and finished him off as his opponent turned away.

Everything moved so fast, the Singaporean could not even remember what happened until he rewatched the bout later in the evening.

“I was definitely on cloud nine. I was extremely, extremely happy,” Lee says.

“It did not even feel real to me because it happened so fast. I could barely wrap my head my head around it. I had to watch it again on someone’s phone. It was definitely an amazing experience, and a great start to my career.”

That came out of nowhere!

From the first day he arrived in the world’s largest martial arts organization, Lee never shied away from facing the best competition – including World Champions.

Last December, he was matched up with former ONE Lightweight World Champion Kotetsu “No Face” Boku, who had four times as much in-cage experience as Evolve’s young phenom.

The showdown took place at ONE: WARRIORS OF THE WORLD in Bangkok, Thailand, and although it is still a relatively fresh memory, it is one the Singaporean will remember for the rest of his life.

“My fight with Boku was very important. It was the first time I was fighting a former World Champion, and it was a big step up in competition,” Lee explains.

“When I went in there, I had a very focused and purposeful game plan, and I was able to execute it perfectly. I was able to strike with him on the feet, and I worked on my speed and my timing.”

Though Lee dropped Boku with a jab and landed some ground strikes, the Japanese veteran returned to his feet. Boku moved forward, seemingly threatening his young adversary with his one-punch knockout power.

That did not faze the “The Warrior,” however. Instead, he remained focused, and saw an opening.

“When I saw the body lock slam, it was there for me, and I took him down,” he continues.

The impact of the move actually knocked out Boku, giving Lee yet another first-round highlight-reel finish.

“That was one of my proudest victories. To this day, I am extremely happy with that win.”

Relive the sensational performance that earned Christian Lee a shot at the ONE Featherweight World Championship on 18 May.

Relive the sensational performance that earned Christian Lee a shot at the ONE Featherweight World Championship on 18 May.Singapore | 18 May | LIVE and FREE on the ONE Super App: http://bit.ly/ONESuperApp | TV: Check local listings for global broadcast | Tickets: http://bit.ly/oneunstoppable18

Posted by ONE Championship on Saturday, May 5, 2018

Having trained in martial arts since he was barely old enough to walk, Lee’s is a master of the fundamentals, but he truly shines when he tries out the new tricks he continues to add to his arsenal.

The example that sits on his list is a specialized submission hold he has dubbed the “Terminator Guillotine” – a modified guillotine choke where the opponent is tilted sideways, and trapped in a body triangle.

Lee unleashed that innovate technique when he clashed with two-division DEEP Champion Kazunori Yokota at ONE: VISIONS OF VICTORY in Kuala Lumpur, Malaysia, in March.

“My fight with Yokota was great. It was a good fight against a tough opponent, and a veteran of the sport,” Lee says.

With his ninth stoppage win, Lee tied the record for most finishes in the promotion, and earned a shot at the ONE Featherweight World Title. 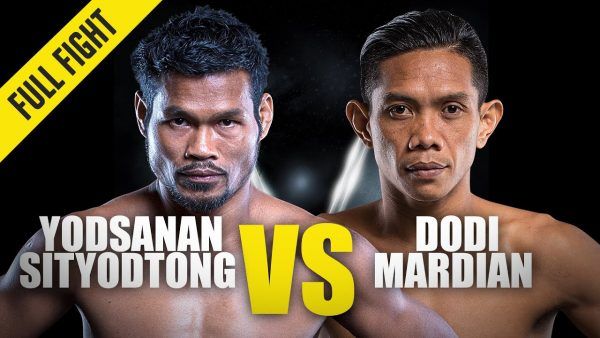