For Aglian “The Alligator” Thani, dogs are more than just man’s best friend.

The Malaysian hero will make his dreams come true when he steps out to compete in the main event of ONE: PURSUIT OF POWER in his hometown of Kuala Lumpur, Malaysia.

Recently, he has also realized another of his childhood dreams by getting his first canine companions. Little did he know, they would help him prepare for that pivotal bout in a major way.

The 22-year-old adopted his first dog in April. As a child growing up in Sentul, Kuala Lumpur, he pined for a four-legged friend, but his father had other ideas.

“I always wanted to have one, but my dad didn’t allow me to, and my family members didn’t like it. Now I’m living by myself, I’m doing what I want,” he laughs.

“I was living in an apartment, where I couldn’t have dogs, and then my chance came. I moved to a house, and now I can adopt all the dogs I want.”

His first adoption was of a miniature poodle named Mimo. When Thani first found him at a shelter, he was very sick, with a tumor in his stomach, but Thani nursed him back to full health.

Mimo was soon joined by an American pit bull terrier puppy named Bella, a Rottweiler named Premium – which he was rescued from a shelter – and then a husky called Mayo.

If “The Alligator” had his way, the Thani clan would still be growing, but he may have to pause his acquisition of pooches for now.

“I adopted two dogs, but the other dogs I had to purchase, because people didn’t just want to give me dogs,” he laughs.

“My plan was to get a pack of dogs – 10 or 15 – but my girlfriend didn’t agree with it. I started with three, and then the fourth one became an option, because she liked the husky so much.”

The Monarchy MMA product’s approach to dog ownership draws parallels with his life as a mixed martial artist.

He explains that many people in Malaysia don’t trust big dogs – the way some feel about professional mixed martial artists, should they mistakenly perceive the sport as a purely violent pastime.

However, Thani is keen to be an example to the world. Just as ONE Championship athletes are honorable, respectful, courageous people, his pets are trained to be calm, loving animals.

“My purpose of having dogs is to show love to the dogs in the right way,” he explains.

Perhaps the best thing about owning a quartet of canine companions for the former ONE Welterweight World Title Challenger is the effects they have had with improving him as a martial artist.

While they don’t accompany him on the mats for some mutt martial arts sparring, their presence in his life helps him to cope with the pressures of training and competing.

“They help me with mental stimulation,” he explains. “If you’re a fighter and you’re training all the time, if you don’t have a good day in training, you’re going to go to a negative zone.

“Dogs do not listen to negative people, crazy people, or angry people. Dogs listen to calm people. When you try to make your dog sit when you’re angry, it won’t sit. When you’re calm and assertive, it will.

“This way, you learn how to keep your mind calm at all times. It has helped a lot throughout my carer, I think it’s the best thing you can do.”

so thank full to @malaysiadogtraining and @thebeaglemania for letting me adopt this big boy its really means a lot i have allways loved dogs and now my pack is almost complete 3 beatiful dog and i have learned a lot from sam a great dog trainer and looking forward to be learning from him soon.

In fact, “The Alligator” has his hounds so well trained, they will wait patiently for his command to eat their food.

That is actually the one time he and his dogs differ. After he has stepped on the scales to make weight, the Sentul boy’s serene state of mind is not the same as his growing pack.

“Totally different! I will just eat everything after the weigh-in,” he laughs.

Thani will need to keep his mind relaxed, and be laser-focused when he steps out in front of thousands of his fans at the Aixata Arena on Friday, 13 July, against a dangerous opponent. 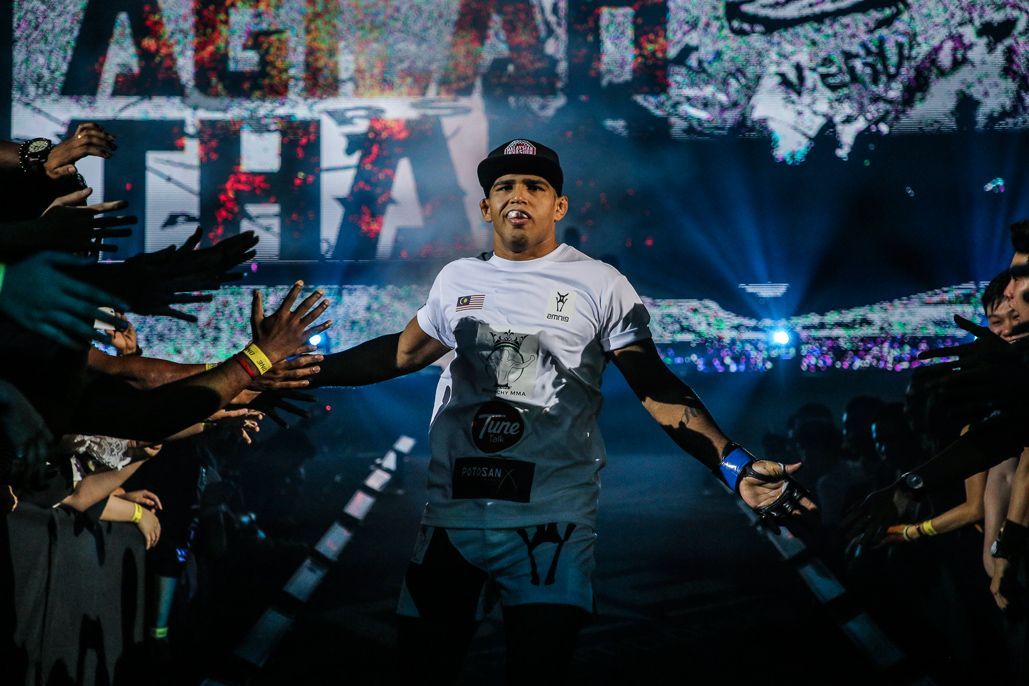 His main-event assignment is a match with fellow former ONE Welterweight World Title challenger, Zebaztian “The Bandit” Kadestam.

If he can keep his cool and overcome the PXC Welterweight Champion from Sweden, he could once again become the leading contender for a World Title opportunity.