Bruno “Bruninho” Barbosa has been in Agilan “Alligator” Thani’s corner since his ONE Championship debut, and is one of the main forces behind his development into one of the best welterweight in the world.

Thani’s mixed martial arts game was built on a foundation of Brazilian Jiu-Jitsu, and as his BJJ coach at Monarchy MMA in Kuala Lumpur, Malaysia, Barbosa has molded his student into a dominant grappler with more submissions than anyone else in his division.

When i was 17 i was training jiujitsu under this man he promoted me to four stripe white belt and after that i had many professors and i m so honored to be promoted by him again to a brown belt today. Thank u so much professor U are awesome and i m more than happy and proud to say that i m ur student . Oss

However, “Bruninho” is more than just a coach to “Alligator.” He is a friend, mentor, and confidant who has helped him to emerge stronger after some tough times that made the 24-year-old question his future in the sport.

Now, Thani is healthy in body and mind, and his coach expects him to go from strength to strength on the global stage thanks to his talent and work ethic.

In this interview, the Brazilian reveals how he has formed such a close bond with the Malaysian hero, his take on Thani’s development over the past several years, and why he is now in a position to reach new heights.

ONE Championship: What makes Agilan such a unique warrior?

Bruno Barbosa: The one thing which makes Agilan stand out from the rest is his hard work. I’ve known him since 2013 when I first came to Malaysia. He always wants to be a better version of himself.

I mean that is a fighter’s mindset in general, but he is quite different. Some athletes stop training when they are tired, but he doesn’t even stop when he reaches that stage.

ONE: What is it like to see your student go from a novice to one of the top competitors on the international stage?

BB: It feels great. There is a sense of achievement behind that. [As well as] my other BJJ students who compete in international tournaments, it is always nice to corner Agilan in a mixed martial arts match.

The atmosphere is great, and the whole camp until the final week is very intense. You can see him turning into a very hungry warrior once he is in training camp mode. It’s nice to see that because he is at his best during the camp up to a fight.

Agilan is a special guy. We used to call him a kid in the gym, now he’s not that little anymore (laughs). He is one of my special students because not only does he pick things up fast, but [myself and Samir Mrabet, Monarchy co-founder and coach] learn a lot from him.

We’ve seen him losing, and it was really hard for us, but he always wants to prove he can fight. When he loses, he does not lose alone, we lose too because we were part of the preparation process.

ONE: Can you share a bit more about how he has developed?

BB: I’ve spent several years with him and he really picks things up at a very fast pace.

It’s been over five years that I’ve taught him, and from white all the way to brown belt, he just keeps learning as hard as he did from day one. On top of that, he always tries different ways to deal with a situation.

For example, if I’m teaching a couple of moves on how to escape from a particular position, he does it but always tries to find an alternative way. Like I mentioned earlier, I learn from him too.

ONE: How hard was it to see him working through injuries during the past couple of years?

BB: I knew his physical condition was getting bad and he was suffering a bit, but I always wanted to support his decision depending on the severity of the situation.

During that time he always told us that he was feeling good during training, but in the Circle, you can see a very different Agilan. Those who have followed him for years, know it is a different “Alligator.” For example, he couldn’t [shoot for] takedowns, which helps him a lot in his fights.

ONE: During that period, what was your advice to him?

BB: He’s a tough kid and he never ever quits. I told him: “If you want to come back and find your old form, you have to respect your body and take care of yourself. You’ve got to do what you’ve got to do, only then will you come back.”

Injuries are never an easy thing to deal with, but we had to let him know that the best way to solve it is through a proper recovery process.

His worry was about not being able to compete for a long time if he needed to go through a surgery. He was worried about the sponsors and everything else an athlete would worry about through an injury. He told me he needed to get his pay, he needed to pay for rent and food and so on.

I would like to thank everyone first of all for their support including my awesome sponsors @monarchymma @saladatelier @scr99_my @tagsspineandjoint @carputapp @unionstrength.my @amnigonline I m truly blessed and humbled to have u guys have my back since day one I got the win last night but I got a lot to work on thanks to all my friends and family who came out I would just like to specially thank my man @conrado.roveri for putting in a lot of time and work with me thru out the year words cannot describe this man's help I would also like to thank my professor @bruninhobbjj for Allways putting in the work on me with my Jiu-jitsu even with a busy schedule he is still there every time to give me his attention And also thanks to my bro @dimitricerberes for Allways polishing me up in my striking and talking sense in to my head thru out time. And last but not least I have only been with this lady for a about 8 months but She and I Allways do our best to put up with each other but for the past 8 week and thru out fight week thank you so much my baby @yas_its_anchali ❤️ For putting up all my shit. Osss

ONE: Could you share your experiences from a similar situation to help him see the light?

BB: Yes, it happened to me when I was only 23 years old. A doctor told me I needed to do surgery on both my knees, but I had the same concern Agi went through. I took the doctor’s advice, and it helped me.

ONE: Last year was much different – he faced some of his toughest tests, but claimed two big wins. What made the difference?

BB: The biggest improvement I saw was his discipline – not that he wasn’t disciplined before, but he started approaching things in a smarter way.

Agi was one of the guys who would be the first at the gym and he would be the last to leave. Conrado [Furlan, Monarchy striking and strength and conditioning coach] gave him a new program, and he followed it thoroughly.

Now, when Conrado tells him to not train, he doesn’t train. He’s taking good care of himself, and it is all down to his discipline. He’s improved so much mentally and physically. Everything is easy when he’s winning, but when he’s losing, it’s the time when we [coaches] have to be there for him.

ONE: How would you rate his performances last year?

BB: He’s a totally new Agilan, and for me, he is back to normal. His grappling has been tested against some high level and really tough mixed martial arts athletes.

I’m his BJJ coach, and my job is to find holes in his game and fix it. So far, he has been able to train normally. A special thanks to Conrado with his training program, and of course, thanks to Agilan’s discipline too.

ONE: What are his chances in the welterweight division this year?

BB: His chances are great, but we don’t want to rush to anything.

ONE: Do you see yourself as a father figure to Agilan and your other students? How important is it to maintain this sort of relationship on the mats?

BB: Yes, I see myself as a father to many of them and I love it. I love it more because I try to respect their space and they respect me back.

It’s not easy to be a coach because you end up knowing more than you want to about your athlete’s life. You feel his pain, we spend too much time together, and it’s impossible – at least for me – to not have that father-and-son relationship because you want the best for them. 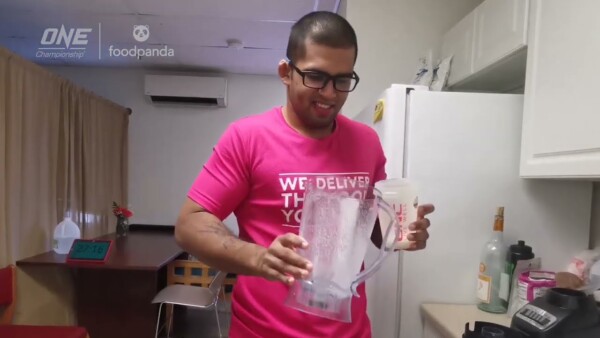