Brazilian Jiu-Jitsu is the foundation of “Unstoppable” Angela Lee’s martial arts career, and her grappling skills will be essential if the ONE Atomweight World Champion wants to win at ONE: MASTERS OF DESTINY.

The 22-year old – who makes her return to action against Michelle Nicolini on 12 July in Kuala Lumpur, Malaysia – has practiced martial arts almost as long as she has known how to walk.

“Unstoppable” grew up on the mats alongside her brother, ONE Lightweight World Champion Christian “The Warrior” Lee in a family that lives and breathes martial arts.

The siblings began their education in “the gentle art” when they were very young because their father wanted them to learn how to be safe and confident throughout their lives.

On 12 July, Angela Lee resumes her quest to add the ONE Strawweight World Title to her outstanding list of credentials against the most decorated female grappler on the planet, Michelle Nicolini!

On 12 July, Angela Lee resumes her quest to add the ONE Strawweight World Title to her outstanding list of credentials against the most decorated female grappler on the planet, Michelle Nicolini!????: Kuala Lumpur | 12 July | 6PM | ONE: MASTERS OF DESTINY????: Get your tickets at ???? http://bit.ly/onemastersofdestiny19????: Check local listings for global TV broadcast????: Watch on the ONE Super App ???? http://bit.ly/ONESuperApp ????‍????: Prelims LIVE on Facebook | Prelims + 2 Main-Card bouts LIVE on Twitter

“Growing up, we focused on all the different disciplines because my dad wanted to make sure we would be able to defend ourselves,” Lee reveals.

“I actually started in no-gi submission grappling a lot more than the gi. That is much closer to real self-defense scenarios, so that was where I would spend most of my time.”

The self-defense aspect of martial arts eventually gave way to Lee’s passion for grappling, which is when she began putting on the gi to learn the pure form of Brazilian Jiu-Jitsu.

Those classes refined the Singaporean’s ground game ability to the level that has allowed her to claim seven of her nine professional mixed martial arts wins via submission.

“As I grew older, I picked up the gi, and I’ve been doing it with the gi ever since, but I feel really confident in both areas,” Lee adds.

“I love submission grappling, I love the ground game because it makes it where technique really shines through. You don’t have to use all strength and muscle.

“You can be very technical on the ground, fight bigger opponents, and still come out on top. I think it’s a really beautiful thing about jiu-jitsu and about the ground game.”

❓DID YOU KNOW❓Angela Lee was suffering from pneumonia during her second World Title defense! ????????: Kuala Lumpur | 12…

Lee’s Brazilian Jiu-Jitsu education started with her father, who is a lifelong martial artist and BJJ black belt.

She pays homage to every instructor she’s ever trained under, including the professors at Evolve in “The Lion City,” but she has a special respect for her dad, who has nurtured her skills for almost two decades.

“My dad has trained for many years now. He’s done it all,” Lee says.

“He’s kind of self-taught. He went to different schools and learned different techniques, and he got to the level where he is today. He knows first-hand what works, what doesn’t work, and he’s taught my brother and I from the time we were small until today.

“Along the way, we’ve had many friends come into the gym to cross train with us, but all of it comes from my dad. He deserves all the credit.”

After years of study, Lee and her brother finally earned their black belts from their father and Mike Fowler at a ceremony held last February.

As proud as the Singaporean was of her achievement, Lee refused to let her promotion affect her approach to practicing and learning the art of grappling.

Every shot of the first-ever twister submission in ONE! Can Angela Lee stop BJJ ace Michelle Nicolini with another impressive submission on 12 July?

???? FROM ALL ANGLES ????Every shot of the first-ever twister submission in ONE! Can Angela Lee stop BJJ ace Michelle Nicolini with another impressive submission on 12 July?????: Kuala Lumpur | 12 July | 6PM | ONE: MASTERS OF DESTINY????: Get your tickets at ???? http://bit.ly/onemastersofdestiny19????: Check local listings for global TV broadcast????: Watch on the ONE Super App ???? http://bit.ly/ONESuperApp ????‍????: Prelims LIVE on Facebook | Prelims + 2 Main-Card bouts LIVE on Twitter

In her view, that is the only way she will ever reach her full potential in the sport.

“It took a lot of years of dedication and training, and that’s kind of the reward you’re given, but a true black belt, a true mixed martial artist, and a true jiu-jitsu practitioner is always going to keep learning and growing,” she explains.

“I think once you say, ‘I’m a black belt, I don’t need to learn anything else,’ your black belt kind of dies with you.

“To be a so-called ‘master,’ you have to always keep learning, and that is one thing my dad has always told me. A master is a forever student.”

Lee’s desire for constant improvement means she is a better martial artist every time she competes, and that is exactly the mentality she is carrying into her next bout against a true legend of Brazilian Jiu-Jitsu.

Nicolini is an eight-time BJJ World Champion who has won virtually every tournament she has ever entered, and defeated Lee once before in a grappling match.

Posted by ONE Championship on Wednesday, June 26, 2019

However, Lee knows this is not a just grappling competition. Although “Unstoppable” believes her ground game can stack up to the 37-year old Brazilian’s, she also says her full repertoire of martial arts skills will be the difference between the two at the Axiata Arena.

“I know that because she’s a specialist in that area, she’s going to want to take the fight right to where she’s strongest, but that’s not something I’m going to give to her easily,” she says.

“Like Christian said about [his] fight with Shinya Aoki, it wasn’t the game plan to go to the ground and fight out of an armbar in the first round, but he neutralized the situation. He found a way to escape, and he found a way to win. That’s the same way I feel with Michelle. 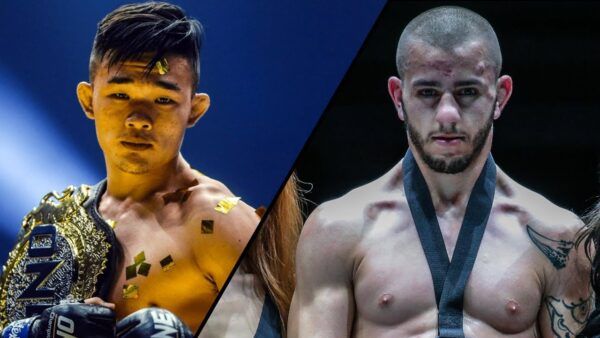