ONE: CALL TO GREATNESS is headlined by a scintillating stand-up battle in Singapore on Friday, 22 February, as the inaugural ONE Atomweight Muay Thai World Championship is put on the line for the first time.

ONE Atomweight Kickboxing World Champion Stamp Fairtex is taking aim at a World Title in her second sport in The Home Of Martial Arts, while America’s Janet “JT” Todd wants to impress on the biggest stage of her career.

Despite winning her first ONE World Title under kickboxing rules, Stamp’s favored discipline is the art of eight limbs. Todd is also a Muay Thai specialist, but she will bring her Western flavor to the ring.

Here are some of the options these athletes have in their arsenal that will make for a thrilling main event inside the Singapore Indoor Stadium. Stamp was born into Muay Thai. Her father was a prominent competitor, and he ran a gym in their hometown along with her uncle.

His style was muay khao – a knee specialist. He passed that down to his daughter, and the Fairtex Gym representative has honed those weapons to perfection.

She strikes with tremendous power and precision – mostly targeting the mid-section of her opponents, which has the advantage of slowing them down as a match goes on.

Her knees in the clinch can be devastating, and she can also step in to strike from range to put seemingly safe opponents in big trouble in a split second.

Can Janet Todd shock the ???? and take home ONE gold against Stamp Fairtex?

Can Janet Todd shock the ???? and take home ONE gold against Stamp Fairtex?Singapore | 22 February | 7:00PM | LIVE and FREE on the ONE Super App: http://bit.ly/ONESuperApp | TV: Check local listings for global broadcast | Tickets: http://bit.ly/onegreatness19

When East meets West, one of the main advantages non-Thai competitors bring to the ring is a solid boxing game, and Todd is no different.

“JT” has a strong boxing output, in particular, her straight shots, which will be key in maintaining range against her rival, or countering her kicks.

The American has a stiff jab-cross combination that is powerful and accurate. It allows her to utilize her full reach, and land with enough force halt Stamp’s advance.

Who should Stamp Fairtex face next? ????

Who should Stamp Fairtex face next? ????Download the ONE Super App now ???? http://bit.ly/ONESuperApp

The 21-year-old Thai boasts a skill that works in harmony with her penchant for knees, and that is a strong clinch.

It is not uncommon for athletes brought up in Thailand to have more of a focus on the intricacies of close-range combat, especially those from the muay khao tradition.

Stamp efficiently uses leverage to control her opponents’ posture, and she is able to manipulate their movements to place them in the path of her knee strikes, or throw them off-balance and onto the mat. Todd is unlikely to want the contest to be waged in the clinch, and she can use her powerful legs to maintain distance.

The IFMA Pan-American Muay Thai Champion has a piston of a push kick, which works to create distance or stop a charge in her direction.

She also combines it with a strong roundhouse kick, which will help to keep Stamp guessing about the which strike to anticipate.

Posted by ONE Championship on Tuesday, February 19, 2019

You cannot overlook Stamp’s experience in the ring. She made her debut at the age of 5, and has 81 contests on her résumé in Muay Thai – as well as her amateur and professional mixed martial arts bouts.

It gives her the composure to implement her game more effectively, and re-adjust if her initial strategy is not working. She has faced every type of opponent along the way and been in good positions as well as bad ones, and that is invaluable.

Stamp has shown her ability to perform under the lights in the world’s largest martial arts organization already, and that could be crucial when it comes to crunch time. 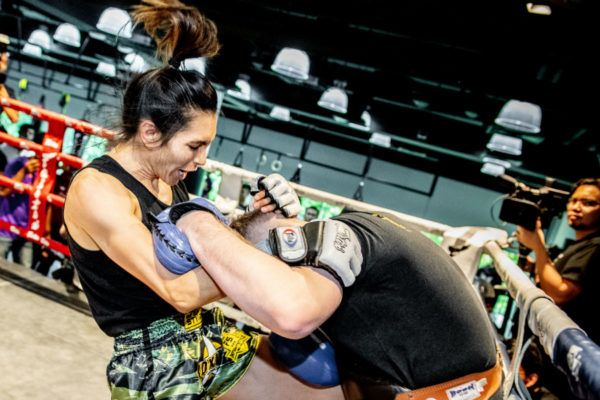 If Stamp tries to close the distance on her opponent, Todd has a sharp tool to counter at close range.

The Boxing Works representative has a lead elbow that she employs as an opponent punches into close quarters, or reaches for a collar-tie.

A single mistake as Stamp tries to establish her grips could open her up to a hard strike to the head with bout-ending potential.