“Super” Sage Northcutt’s open workouts have been a thing of beauty, but the high-flying acrobatics is not the only tool in the Karate World Champion’s locker.

When he makes his promotional debut against Cosmo “Good Boy” Alexandre at ONE: ENTER THE DRAGON on Friday, 17 May, he will bring a vast array of tools with him to try and get the victory.

At just 23 years old, Northcutt is still expanding his skill set dramatically with every outing. He only fully dedicated himself to his mixed martial arts training in 2017 and, since then, he has posted three consecutive victories.

Armed with this momentum, he makes his bow in the world’s largest martial arts organization inside the Singapore Indoor Stadium.

Ahead of his battle with the multiple-time Muay Thai and Kickboxing World Champion, we take a look at five key elements in Northcutt’s repertoire that could lead him to success on the global stage for martial arts.

FACT: "Super" Sage Northcutt began his martial arts journey at age 4! He makes his ONE debut on 17 May against Brazilian striker Cosmo Alexandre!

FACT: "Super" Sage Northcutt began his martial arts journey at age 4! He makes his ONE debut on 17 May against Brazilian striker Cosmo Alexandre!Singapore | 17 May | 5:00PM | Watch on the ONE Super App: http://bit.ly/ONESuperApp | TV: Check local listings for global broadcast | Tickets: http://bit.ly/onedragon19

Northcutt grew up in karate. He started training in the sport when he was just four years old. With 77 Karate World Titles to his credit, his years of training and competition in the martial art have made certain techniques second-nature.

One that he uses to great effect is the lead-leg side kick. It is vital for the Team Alpha Male representative to maintain his range, and he employs it to the knee, thigh, and body to stifle advancing opponents.

His time in karate — and later kickboxing — did not reward close-quarters action, and it is still not his forte in the stand-up exchanges, so he can make his rivals wary of entering with his snapping side kick, which allows him to operate at a longer range.

One of the techniques “Super” Sage has added to his arsenal over time is the jab. Many karate styles do not allow punches to the head in competition, so it was not a strong point for Northcutt early in his martial arts career.

However, he now has a long, sharp jab that works well with his side-on stance to close the distance and land. Also, it is helpful when he opts to back out of range.

Northcutt is often seen doubling or even tripling up his lead hand to give him cover for his entry into power punches with his straight right.

This offers a safer entry than the traditional lunging backhand familiar to karate stylists, which can leave them exposed when an opponent recognizes the step in.

A window into "Super" Sage Northcutt's training as he gears up for his ONE debut against Brazilian striker Cosmo Alexandre!

A window into "Super" Sage Northcutt's training as he gears up for his ONE debut against Brazilian striker Cosmo Alexandre!Singapore | 17 May | 7:00PM | Watch on the ONE Super App: http://bit.ly/ONESuperApp | TV: Check local listings for global broadcast | Tickets: http://bit.ly/onedragon19

Almost 20 years of martial arts study does not just collate individual techniques, but also, its universal rules can help an athlete transfer into different styles.

Northcutt’s timing is one of these, and it lends itself into his striking and wrestling output. He can read an opponent and know when to engage, and also adapt quickly in the face of oncoming aggression.

“Super” Sage wrestled in high school and achieved good results after only a short period of training. His attributes of timing and power were as key then as they are now, and have helped him blend between striking and wrestling in mixed martial arts.

The American is often seen entering behind a flurry of straight punches before hitting a blast double-leg takedown, which is extremely difficult to stop in full flow, and he can dish out damaging ground and pound from top position.

#4 A Threat From His Back

Not ☝, not ✌ … "Super" Sage Northcutt has his sights set on THREE ONE World Titles!

Not ☝, not ✌ … "Super" Sage Northcutt has his sights set on THREE ONE World Titles! Singapore | 17 May | 7:00PM | Watch on the ONE Super App: http://bit.ly/ONESuperApp | TV: Check local listings for global broadcast | Tickets: http://bit.ly/onedragon19

Thanks to his reputation as an elite striker, opponents have often tried to take Northcutt to the canvas to test his ground game. This is another area in which he has improved substantially, and getting him to the mat is not a guarantee of success.

The Texas native is adept at retaining the guard position, and from there he is extremely active. He controls the distance well with head control to keep his rivals in close, or knee shields and feet on the hips to push them away.

Offensively, he attacks with submissions and strikes, including potential bout-ending upkicks when he manages to create room with his guard.

#5 He Will Not Let You Rest

"Super" Sage Northcutt was destined for The Home Of Martial Arts.

"Super" Sage Northcutt was destined for The Home Of Martial Arts. Singapore | 17 May | 7:00PM | Watch on the ONE Super App: http://bit.ly/ONESuperApp | TV: Check local listings for global broadcast | Tickets: http://bit.ly/onedragon19

Northcutt does not accept bad positions, and when his opponents are trying to secure them, they are subject to a barrage of strikes to earn their reward.

In a clinch position on the fence, “Super” Sage’s balance helps to keep him up while he works with elbows to the head or punches to the body, and he does not rest even if he is dragged to a seated position.

He forces his foes to change position with his strikes, and these small movements can offer opportunities to work back up to his feet.

When clinching, any potential adversary also needs to be aware of the particularly potent guillotine, which he has used to successfully submit people, but more often to threaten with in order to elicit a scramble. 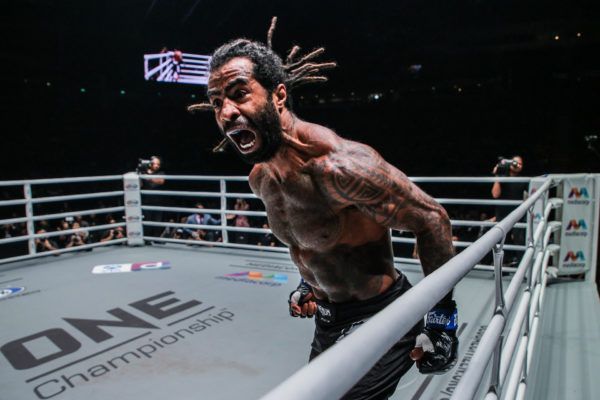