Christian “The Warrior” Lee is an athlete who can honestly say he has grown up competing on the biggest stage in martial arts.

With 13 bouts on his résumé including a World Title shot that all happened before his 21st birthday, Lee has learned a lot since first making his ONE Championship debut in 2015.

During his career, Lee has managed to earn more finishes than any other athlete in the history of the ONE featherweight division. In doing that, he has put on some of the most exciting bouts in the sport.

???? Hands up if you think Christian Lee earns another featherweight World Title shot in 2019!

He has loved every minute of it.

“It’s been a great journey with ONE Championship so far,” Lee said.

“I’m going on four years with the company now. It’s been nothing but positive.”

Despite his long list of accomplishments at such a young age, Lee remains as grounded as anybody on the roster.

Ahead of his next challenge – a rematch with Team Lakay’s Edward “The Ferocious” Kelly at ONE: ETERNAL GLORY – the Singaporean star broke down the most valuable lessons he has learned during his rise in the world’s largest martial arts organization.

It is all knowledge he hopes to pass along to the next generation of athletes hoping to find the same level of success in ONE Championship.

Surround Yourself With The Right People 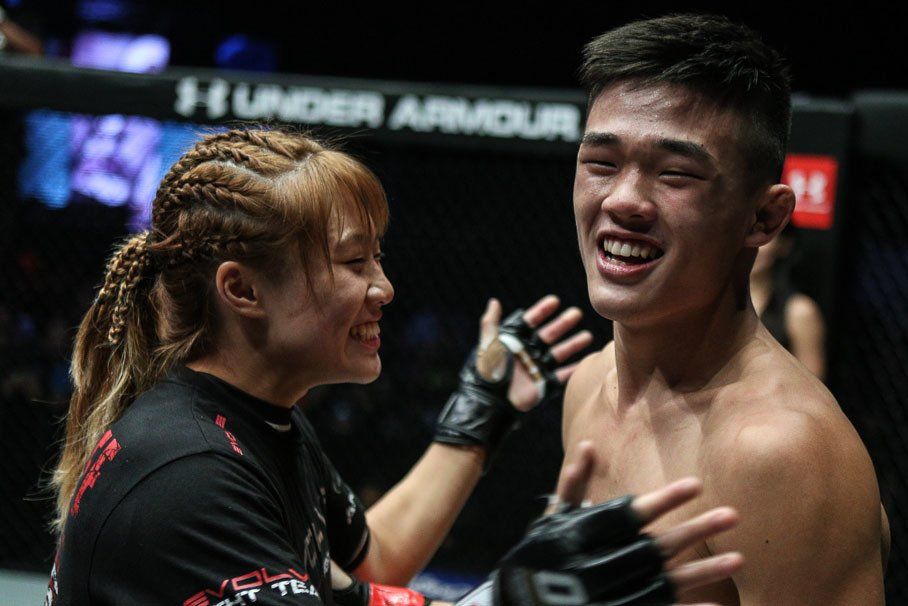 Any time Lee competes, he is always flanked by his father as well as his sister, “Unstoppable” Angela Lee, who happens to be the reigning and defending ONE Atomweight World Champion.

Lee’s father, Ken, has been his primary trainer all his life and his sister has been a stalwart in the gym as they both learned martial arts as a family growing up.

The rest of his immediate family, too, has dedicated their lives to martial arts, which provides a strong base of support for the Evolve representative at home and in the gym.

Even as he has forged his own path in ONE Championship, Lee has always looked to those same people for support. He believes that has been a key to his success.

“Keep the right people around you,” Lee says.

“I feel part of me and my sister’s success is directly related to the fact that we have our parents around us and our family. We have great partners around us. We keep our support unit strong and full of good people.

“I feel like that’s been very important on the road to success.”

Keep Your Feet On The Ground

If you get stuck under Christian Lee, you're gonna have a bad time…

If you get stuck under Christian Lee, you're gonna have a bad time…Jakarta | 19 January | 6:00PM | LIVE and FREE on the ONE Super App: http://bit.ly/ONESuperApp | TV: Check local listings for global broadcast | Tickets: http://bit.ly/oneglory19

Posted by ONE Championship on Saturday, December 22, 2018

Because Lee has found so much success at such an early age, it would be understandable if he started to develop a bit of an ego.

There is nothing wrong with being proud of so many impressive wins, but Lee has vowed never to let any of that success go to his head.

In fact, Lee considers his humility and ability to stay grounded in the face of fame as a foundation of his martial arts career that he has continued to build on with every performance.

“Never lose track of who you are,” Lee explains.

“Through my sister’s success – and even through my success in fighting – we always stay humble. We always work hard. We always stay the people we were before we started this journey. I feel that’s very important.

Lee will never shy away from asking for what he wants, but at the same time, he will never dishonor himself, his family, or the sport of mixed martial arts by changing who he is as a person.

“I like to keep to myself, I’m not very outspoken, but when there are things to be said, I’ll say them,” Lee adds.

“But I like to keep to myself, and I’m not one to boast about my success.”

Be A Student Of The Game

Christian Lee can tap you out from any position!

Christian Lee can tap you out from any position!Jakarta | 19 January | 6:00PM | LIVE and FREE on the ONE Super App: http://bit.ly/ONESuperApp | TV: Check local listings for global broadcast | Tickets: http://bit.ly/oneglory19

Posted by ONE Championship on Friday, December 28, 2018

Everything that Lee has learned during his mixed martial arts career has been important, but his undying desire to always be better has arguably benefited him more than anything else.

Lee is always ready to compete because he never takes days off from the gym. He has an incredible work ethic, and he also loves training so he can learn new tricks each time he steps on the mats.

In fact, Lee has even innovated his own submission moves in the past and then managed to pull it off inside the cage.

More than anything, Lee just loves to learn, and that is why his constant evolution in his martial arts education has been a huge factor that has led to so much success.

“It’s so important, and it’s so underrated,” Lee says.

“I feel like there’s an endless possibility for your skills for your development as a person and as a fighter. I’m just constantly looking to evolve myself every day.”

Lee will be the first to point out that at 21 years old, he has barely scratched the surface for his true potential. He vows that will always be the case, too. Even if, a decade from now, he is a multi-time World Champion with a list of records as long as his arm, he will still be pushing just as hard to learn something new every day.

“That’s why I feel I’m on track to be the best fighter in the world.”