Love comes in various, mysterious forms. Some people experience love at first sight, while others spend their entire lifetime searching for their one true love.

For many of the heroes in ONE Championship, their respective significant others are the main motivations for their great successes.

Let’s take a quick look at some of ONE’s most fascinating love stories, and explore what brought these couples together.

Two-division ONE World Champion Martin “The Situ-Asian” Nguyen is a fierce competitor inside the cage, but he possesses a gentle and tender soul outside of it. Behind the devastating punches and submission prowess is a man nurtured by a love that changed him.

He originally met his future wife just days before his 17th birthday. The shy Brooke needed the help of her friend to get Nguyen’s phone number, when they first met eleven years ago in a shopping center. However, once they got to talk, they instantly clicked.

Nguyen was once a mischievous and rebellious adolescent, but Brooke was the one who tamed his wild heart. And, after the birth of their first child, he completely matured for both his wife and his new family.

“At first, I was all about my mates and going out was the thing. We thought we were invincible,” he admits. “But then she became the sole person I had to look after, and my son did as well. It made me become a man.”

Brooke and his three children also became his main motivation, and their love has fueled Nguyen’s success as the reigning ONE Featherweight & Lightweight World Champion.

Bruno Pucci’s promising martial arts career has been weighed down by injuries that kept him away from the cage.

While recovering from one of these injuries in his home country of Brazil back in May 2015, he saw future ONE Women’s Atomweight World Champion Angela Lee make her professional debut at ONE: WARRIOR’S QUEST halfway across the world in Singapore.

As she walked down to the ONE cage, he was mesmerized.

“What got my attention was she used the same walkout music as me — The Script’s ‘Hall of Fame,’” Pucci recalls. “I watched her match and she won by armbar, and I was really impressed with her performance.”

The two would soon meet at Evolve MMA. Pucci was a returning instructor, and Lee joined the gym as a member of the Evolve Fight Team. They would spend time together on the mats, they would talk quite frequently, and soon they were dating.

Then in 2017, following a romantic dinner, Pucci brought Lee to the Singapore Botanic Gardens to ask her a question.

“I sat her down on the bench and I said, ‘I have something I want to tell you. I do not want you to be my girlfriend any more,’” he recalls, which initially caused Lee to get upset. “And before she got angry, I went on one knee and asked her to marry me. She said yes, smiled, cried, and it was really nice.”

While she said yes in a heartbeat, it was only after Lee’s family gave their blessing that the two would officially announce their engagement via Instagram.

Even more incredibly, when Danny O’Donoghue, lead singer of The Script, found out about how Lee and Pucci were brought together by his band’s song, he said: “What a great story. I’m glad our song had a little hand in bringing them together. Awesome.” 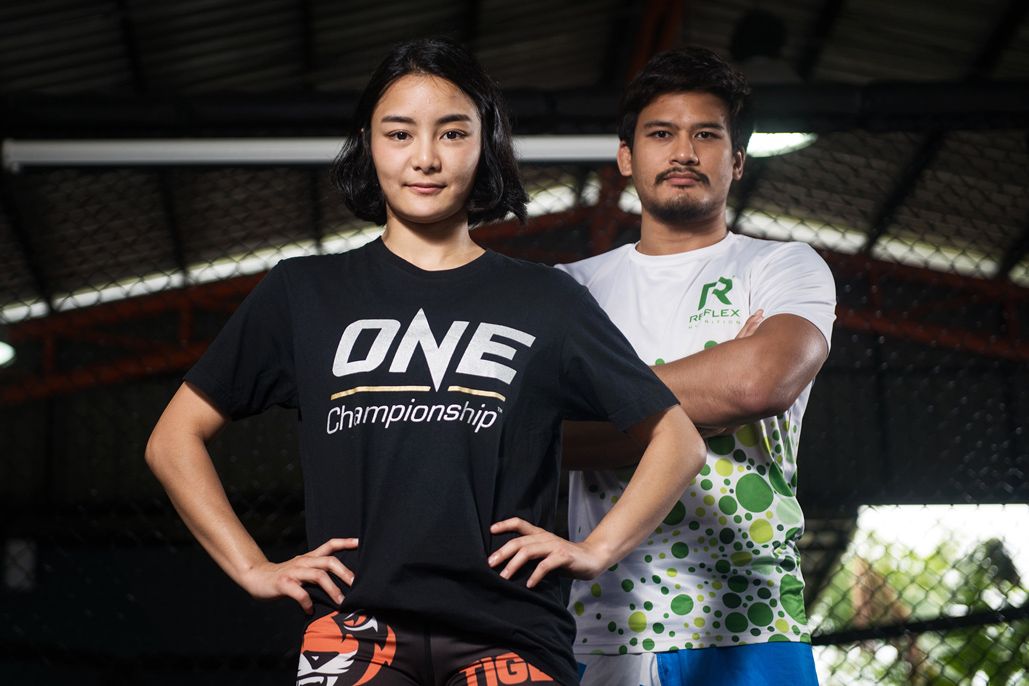 Like countless others, lightweight contender Shannon “OneShin” Wiratchai was smitten by Rika “Tinydoll” Ishige the first time he saw her emcee an event in an aikido gym.

Although the lightweight was attracted to Ishige, she did not pay him much attention, as she was entirely focused on her emceeing duties for the night. Wiratchai even tried messaging her on Facebook, but she promptly blocked him.

Two years later, “Tinydoll,” sought “OneShin” for martial arts training so she could become a professional. Over time, as the two spent more and more time together on the mats, they got closer, and finally, they started dating.

Now, they are inseparable, and love each other’s company both inside and outside of the gym.

“The skill that I am most impressed of with Rika is that she always smiles,” Wiratchai offers. “She enjoys life because she is doing what she loves. We are similar that way, and that is what I like about her most.”

“What I like most about Shannon is when he is not competing in the cage, he is very funny and not too serious,” Ishige continues. “He is fun and he understands the art of communication. I am happy being with him.”