Following a sensational ONE Championship debut, Wondergirl Fairtex promised to use a wider array of weapons in her second promotional appearance.

The 21-year-old phenom did just that, needing only two impressive rounds to finish off KC “Pinay Fight” Carlos via TKO in their ONE Super Series Muay Thai strawweight encounter at ONE: A NEW BREED in Bangkok, Thailand, on Friday, 28 August.

After a quick touch of gloves, Wondergirl sent a stern warning to Carlos with a thudding low kick. The Thai then stormed forward while working her powerful right hands, but “Pinay Fight” did a splendid job of stuffing her own right hands into the face of the Fairtex standout.

Owning the clear height advantage, Wondergirl made her way into the clinch, where she sunk knees into the body and elbows into the head of Carlos.

To her credit, “Pinay Fight” did not waver. From the outside, she threw body kicks and looping right hands. They just weren’t enough to hold off the Fairtex star, who sent Carlos’ head backward with punches from both hands.

Next, a flurry of right hands and downward elbows from Wondergirl forced Carlos to work from within the clinch, but once there, the Thai turned up the heat with more knees to the body as the first round ended.

A high kick from Wondergirl started the action in the second, which made a desperate Carlos fend off the Thai with body kicks. The Fairtex athlete, however, walked right back into the clinch, where the women volleyed knees back and forth.

Once separated, a series of right hands and kicks from Wondergirl forced “Pinay Fight” backward and the two found themselves tangled yet again. The referee unglued the athletes – but that was the beginning of the end for the Phuket Top Team and Heritage Muay Thai representative.

Wondergirl went back into the clinch and folded over her opponent with piercing knees to the belly. Whenever “Pinay Fight” popped her head up, jutting elbows were waiting for her.

With the damage written all over Carlos’ face, the referee waved off the contest at 1:06 of round two. 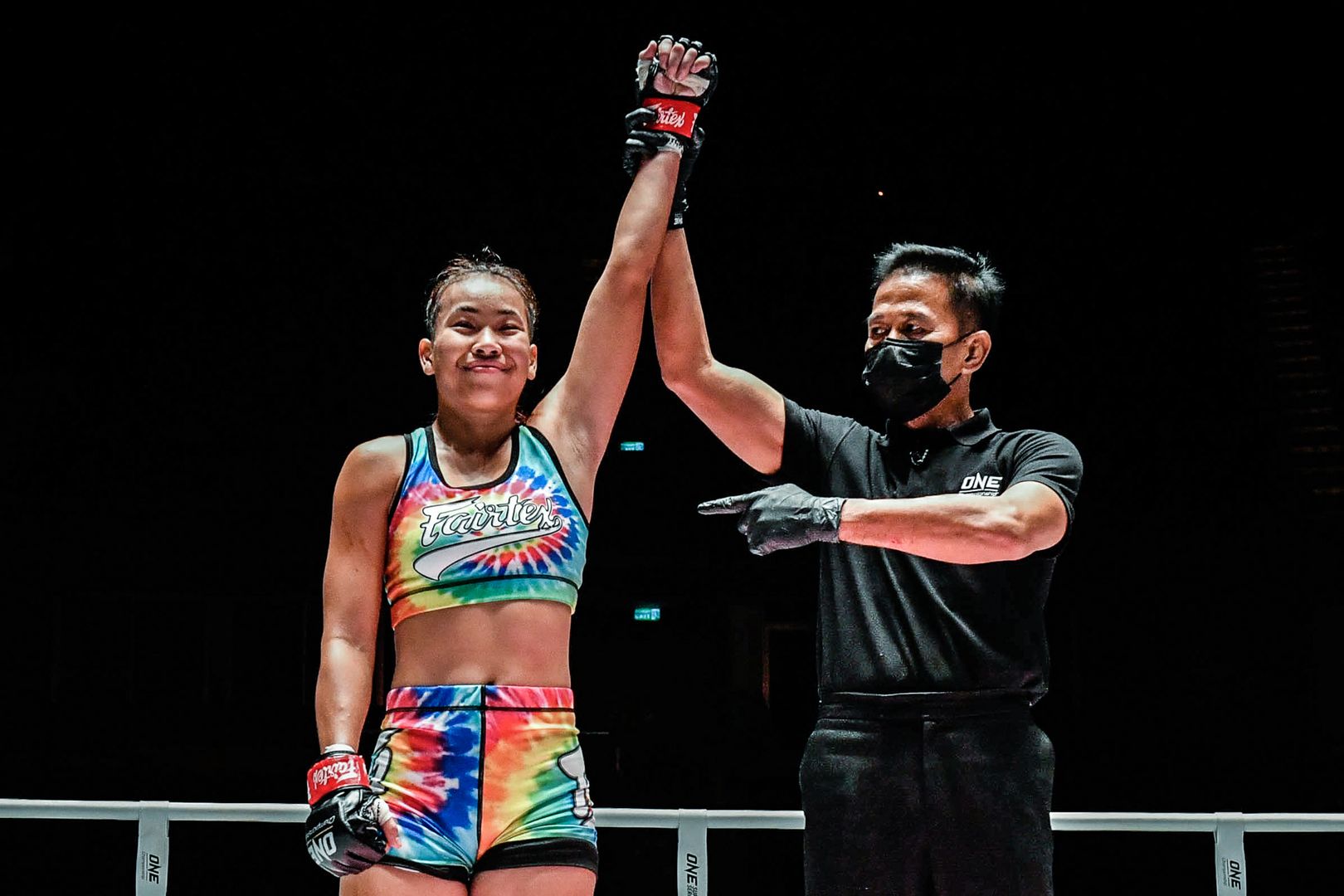 The win moved Wondergirl’s record to 35-16-2 and showed the matchmakers at ONE that she’s ready for a highly regarded striker like Viktoria Lipianska or Amber Kitchen.