Ritu “The Indian Tigress” Phogat entered the Circle on Friday night with one thing on her mind – redemption. And that’s just what she earned after three rounds of hard-fought action.

Phogat put herself back into the win column as she defeated “MMA Sister” Lin Heqin by unanimous decision in their atomweight mixed martial arts matchup at ONE: BATTLEGROUND in Singapore on 30 July. 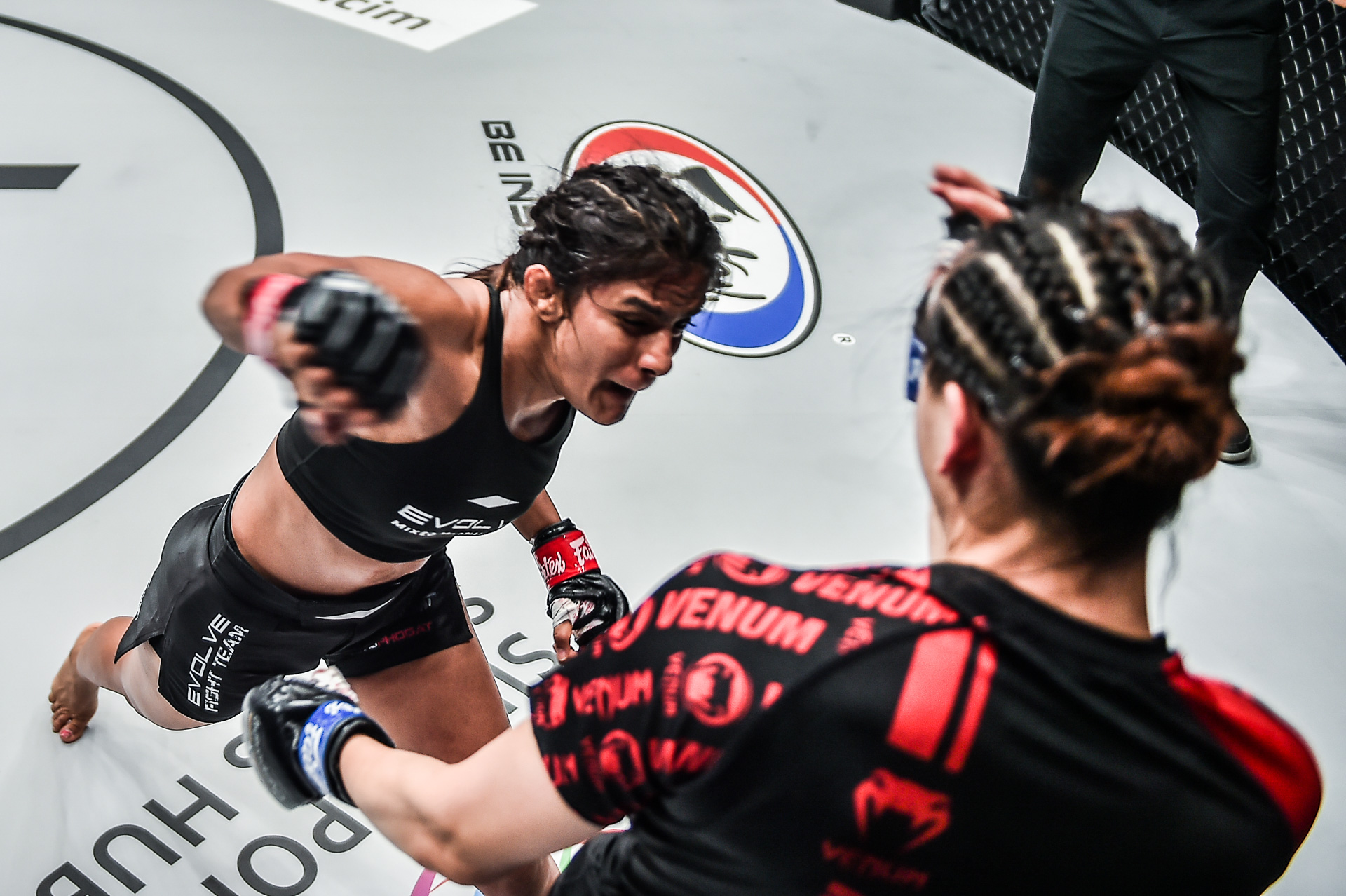 Both women started the opening round by slinging leather in the center of the Circle, but the action picked up after Phogat shot for the first takedown. She forced Lin into the Circle Wall, and after grinding through a seemingly unshakable defense, finally dragged her foe to the canvas.

Once there, Phogat immediately went for a scarf hold, but the Chinese veteran recognized the submission attempt and countered by trying to take Phogat’s back. The Indian Wrestling Champion, however, was too strong to move, and she maintained a tight headlock on Lin while sniffing for a keylock.

The duo returned to their feet, and Lin looked much more comfortable as she snapped punches at “The Indian Tigress” from the outside. When Phogat shot in again, Lin pulled an uppercut out of her back pocket, whirled it at the Evolve MMA product, and stopped her in her tracks.

When the women re-emerged from their respective corners for round two, Lin went back to throwing long and distracting punches. With that, Phogat was forced to bob and weave and throw wild right hands, one of which sent “MMA Sister” into the Circle Wall.

“The Indian Tigress” then dragged Lin to the canvas again and fell straight into the Chinese athlete’s guard. The Hunan resident, however, wasn’t going to lie like meat under a mallet. She walked her long legs up the back of Phogat, threatening with a submission.

Phogat worked her way out and into side control, where she showcased her brilliance. From that position, she hammered elbows and punches into the face of Lin, who tried to wall-walk her way into an inverted triangle.

But as Lin was searching for the lock, Phogat adjusted. And not only did she adjust – she increased her output and drove knees into “MMA Sister’s” ribs. “The Indian Tigress” then pinned Lin’s arm under her knee and dropped heavy right hands to finish the canto. By round three, Phogat’s confidence was surging. She immediately chased Lin, scored a takedown, and worked her ground-and-pound. “The Indian Tigress” was relentless with her attacks, which included hammerfists, punches, and elbows while standing inside Lin’s guard.

Lin countered with upkicks, one of which hinged Phogat’s head back, but the Indian was determined to finish strong. She dropped, got full mount, and sent elbows into the Chinese athlete’s head. She then flattened “MMA Sister” and smothered her for the remainder of the round.

After 15 minutes of action, the judges gave the nod to Phogat, who bounced back from her only career loss and sent herself back on an upward trajectory in the loaded women’s atomweight division.