“Mighty Warrior” Kang Ji Won may have been quiet in the weeks leading up to his main event clash against Amir Aliakbari, but his actions spoke louder than his rival’s brash words when it mattered most.

The undefeated South Korean phenom brought Aliakbari’s hype train to a grinding halt on Friday, 5 March, as he ruined the Iranian superstar’s highly anticipated promotional debut at ONE: FISTS OF FURY II.

Kang shocked the self-proclaimed “Iron Sheik” – and the global fan base – when he scored a spectacular knockout less than two minutes into their heavyweight mixed martial arts encounter at the Singapore Indoor Stadium.

But similar to his victory over Aliakbari’s compatriot and longtime AAA Team stablemate, Mehdi Barghi, last month, “Mighty Warrior” had to overcome adversity along the way. 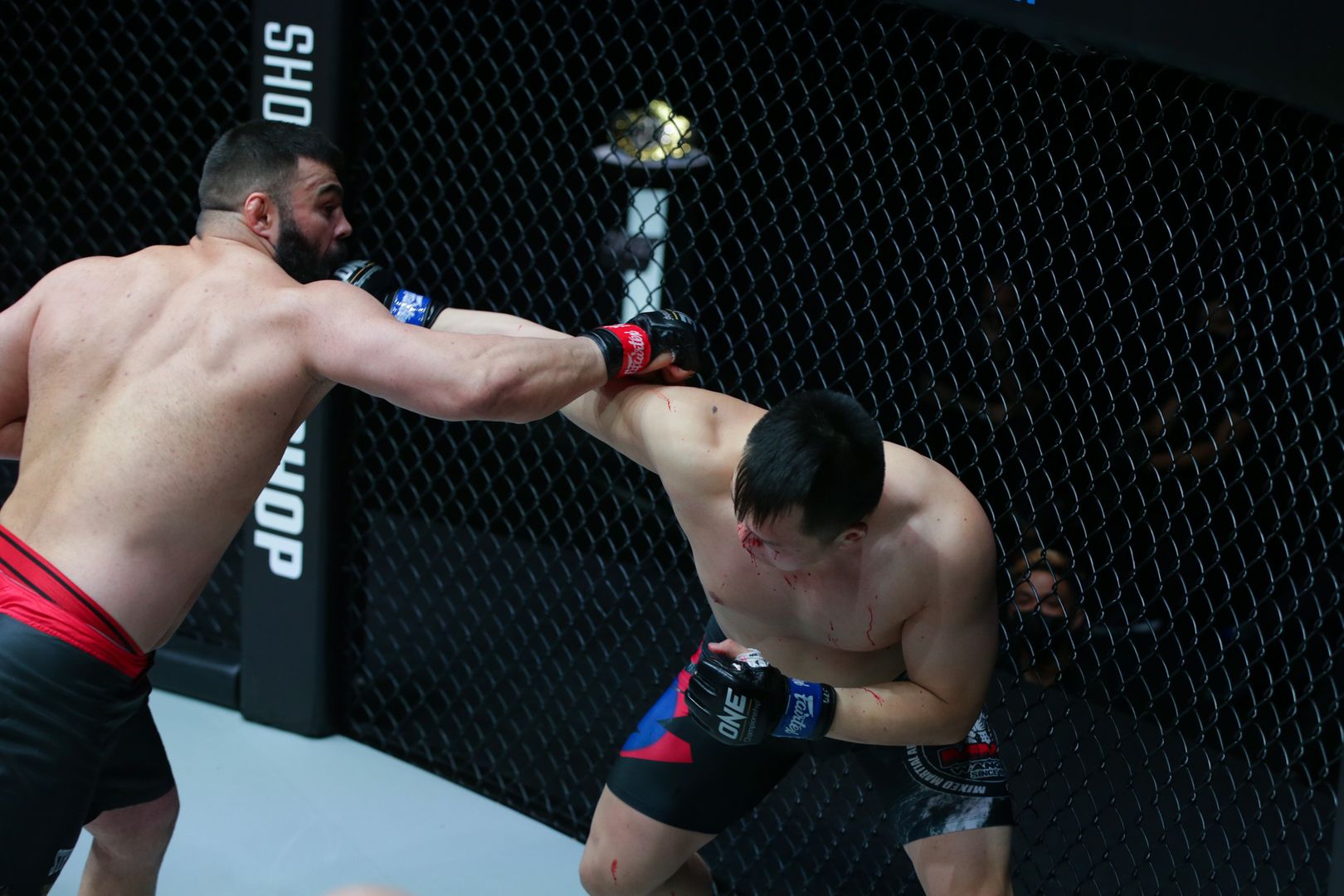 Following a touch of the gloves, Aliakbari took the center of the Circle while the South Korean circled back and forth on the outside in an effort to keep his bearded rival guessing.

Each behemoth treated the opening minute as a feeling-out process, as they tried to loosen up their movement, gauge their distance, and coerce the other into a dangerous situation.

When that minute was up, the Iranian marched ahead, closed the distance, and looked to exert his dominance. He then rushed forward with a looping right hook that partially connected with Kang’s left eye.

“Mighty Warrior” immediately bounced back onto the Circle Wall, covered up, and retaliated with a short right hook. However, the moment his strike landed, the Tehran native uncorked a second massive right hook, and that cinderblock landed on the South Korean’s chin.

Kang ate the shot, and the ensuing short left that followed, but he threw a left hook of his own as he backpedaled away from danger.

Kang kept moving, but the damage had already been done. His left eye started to get puffy and was on the verge of closing.

Nevertheless, “Mighty Warrior” lived up to his nickname, remained positive, and continued to circle around the outside as if nothing had happened.

After throwing a front kick and pulling it away from the South Korean’s grasp, the “Iron Sheik” continued to walk forward with his colossal fists ready to finish the job. Aliakbari unleashed another massive right hook that partially connected, while the Geoje resident just missed with a counter left.

The brash Iranian reset himself and lunged forward with a straight right. Kang wisely slipped it and responded with another counter right that just touched the chin. However, the South Korean followed up with a devastating left hook to the jaw, instantly crumpling Aliakbari and turning off his lights.

Referee Olivier Coste immediately jumped in and waved off the action at 1:54 of the opening stanza. 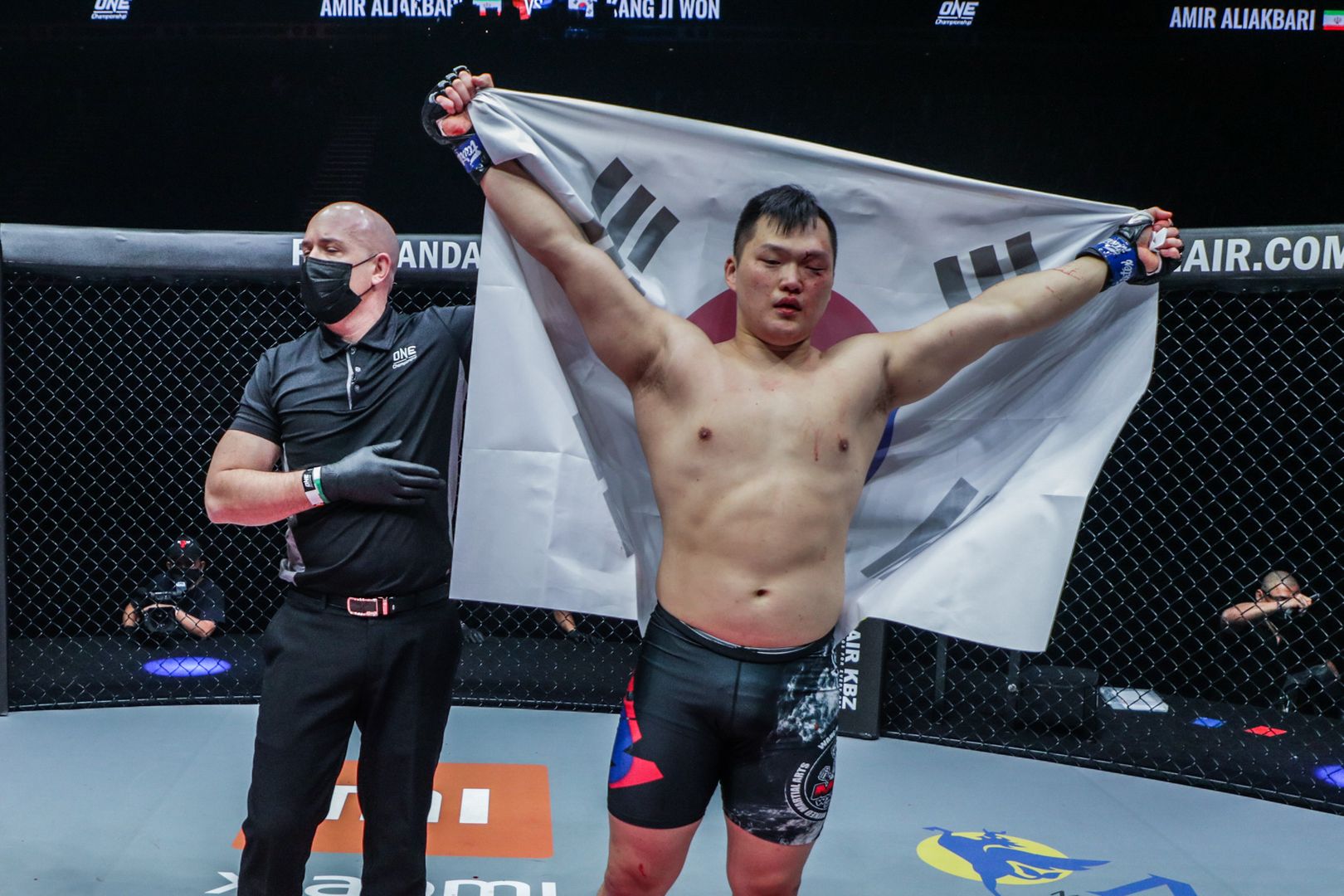 The stunning victory moved Kang’s professional record to a perfect 5-0 and continued his streak of scoring a first-round knockout in every fight.

It also marked his second consecutive win in ONE Championship and against AAA Team competitors.

While ONE Heavyweight World Champion Brandon “The Truth” Vera is still the man to beat, “Mighty Warrior” announced himself as one of the biggest threats in the division.

Now, the humble South Korean brings incredible momentum and confidence into his matchup with 13-time Brazilian Jiu-Jitsu World Champion Marcus “Buchecha” Almeida at “ONE on TNT II” on 14 April.