After a rousing ONE Championship debut in May, Jenelyn Olsim produced a stellar encore on Friday night.

The #5-ranked strawweight contender overcame a gritty performance from Bi “Killer Bee” Nguyen to score a hard-earned unanimous decision win in their atomweight fight at ONE: BATTLEGROUND III, which aired on 27 August from the Singapore Indoor Stadium.

Prior to the bout, Nguyen promised to take Olsim into deep waters, and she did just that. But the Team Lakay standout’s resolve was on full display, as she got the nod from all three judges after a solid outing in her new weight class. 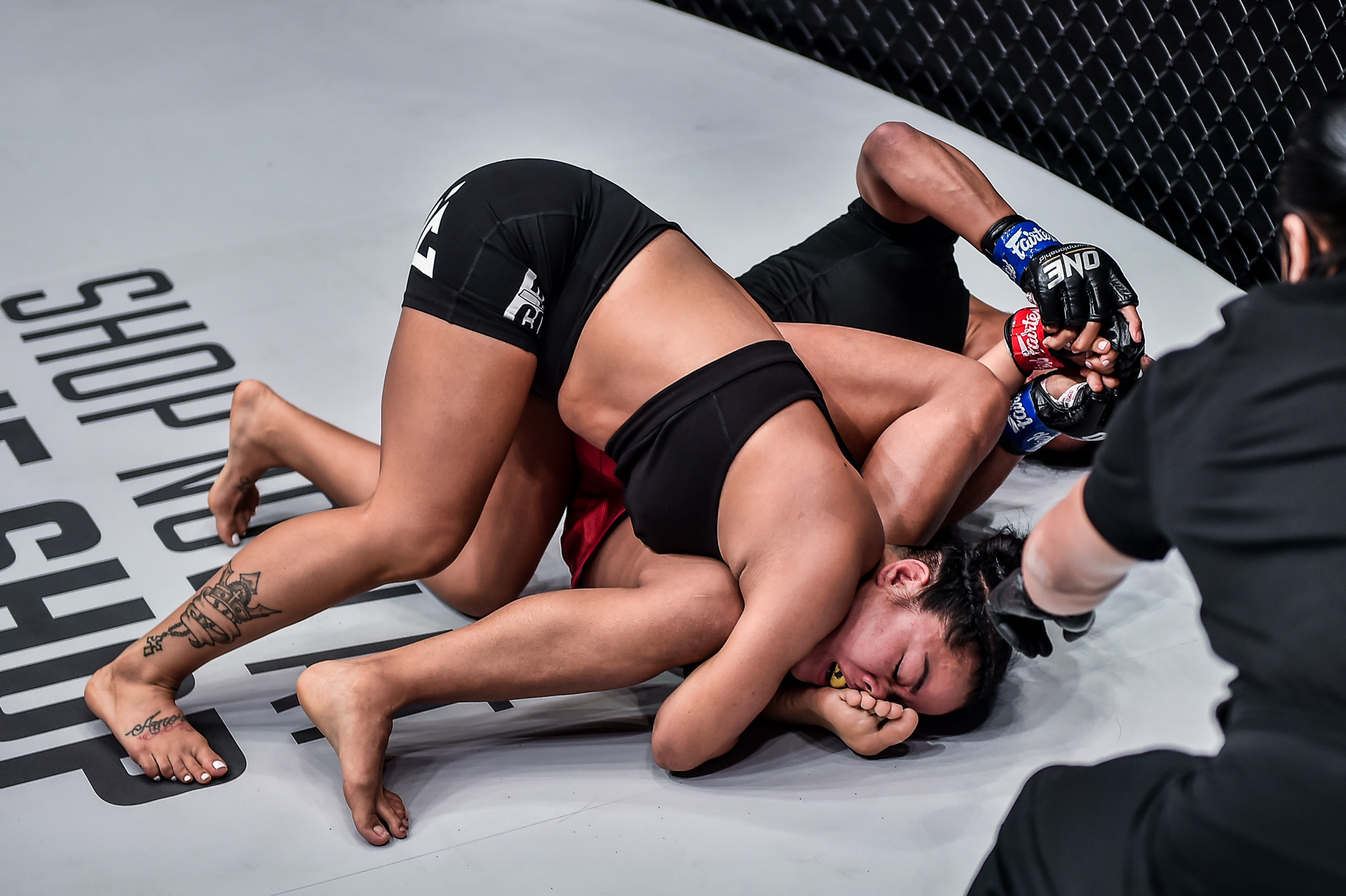 In the opening round, “Killer Bee” quickly tested Olsim’s improved ground game by shooting for a takedown, but the 24-year-old Filipina confidently fended off that advance and took the side mount while looking for the same choke that forced Maira Mazar to submit in her debut.

The Vietnamese-American slipped out of the choke but not without eating a solid elbow from Olsim in the clinch. That didn’t deter Nguyen from pressuring again, though, and she quickly tripped her opponent to the mat to force another grappling battle.

That plan almost backfired on “Killer Bee,” as Olsim decided to get creative with her submissions. Looking comfortable on her back, the Benguet native threw up an omoplata attempt, which later transitioned to a gogoplata. But those attempts turned out to be futile, as Nguyen slipped out of harm’s way moments later.

After briefly getting back to the feet, “Killer Bee” finally controlled Olsim on the ground, scoring another trip before mounting her rival. Looking to control the Filipina even further, Nguyen tried to push her to the Circle Wall, but the Team Lakay rising star used that to her advantage and countered to end the round in side control. 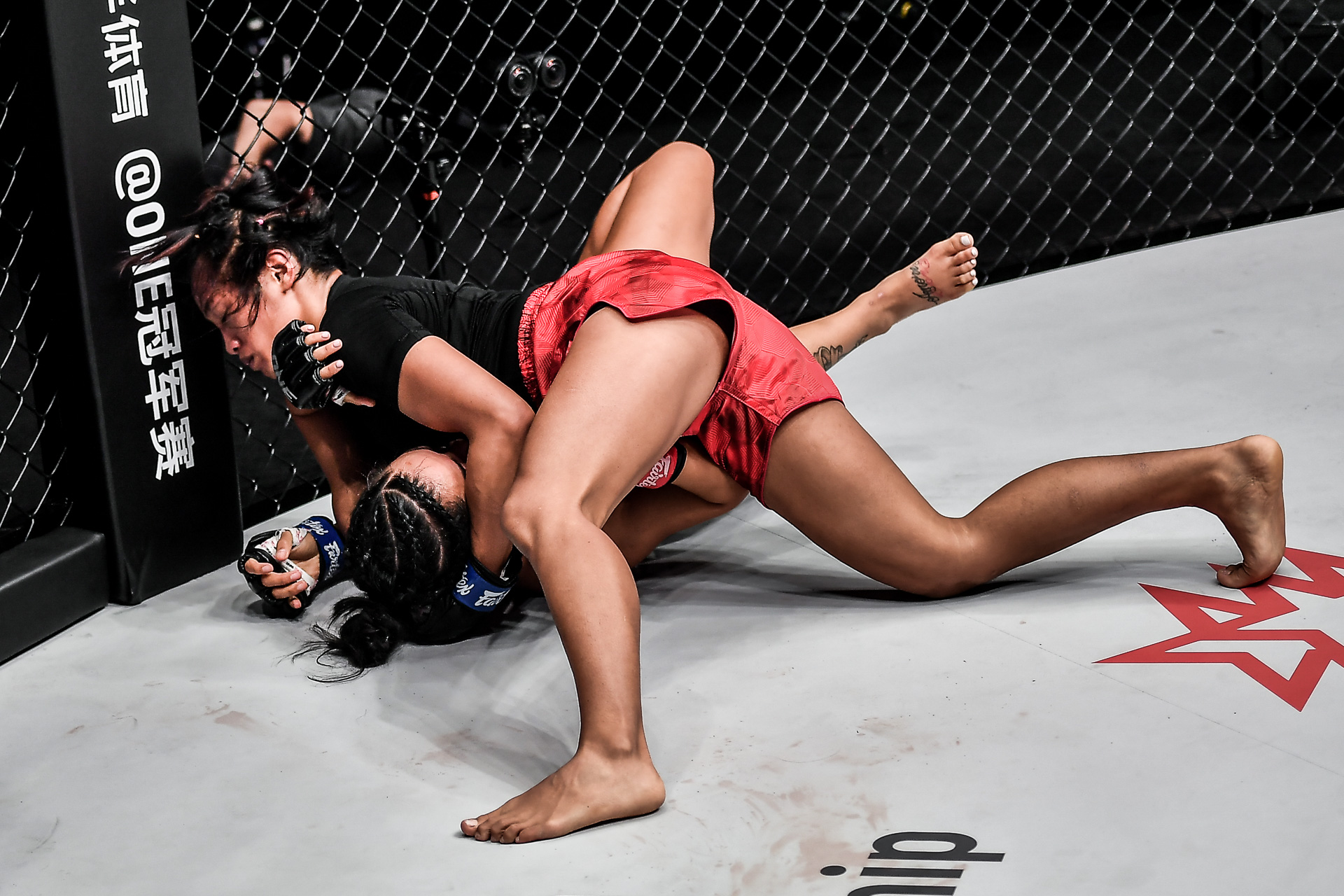 “Killer Bee” started the second round aggressively, as she brought the fight to Olsim, who settled for counters. The 31-year-old veteran found brief success on the feet, closing the gap and landing some punches while slipping out just when her rival reacted.

But right when Nguyen looked comfortable in the stand-up game, Olsim unleashed the most significant punch of the bout – a beautiful straight right that floored her opponent with a little more than three minutes to go in the frame.

Olsim quickly followed “Killer Bee” to the mat and worked from her guard. She mixed up the point of attack from elbows to body punches, a sequence that continued until the round ended. 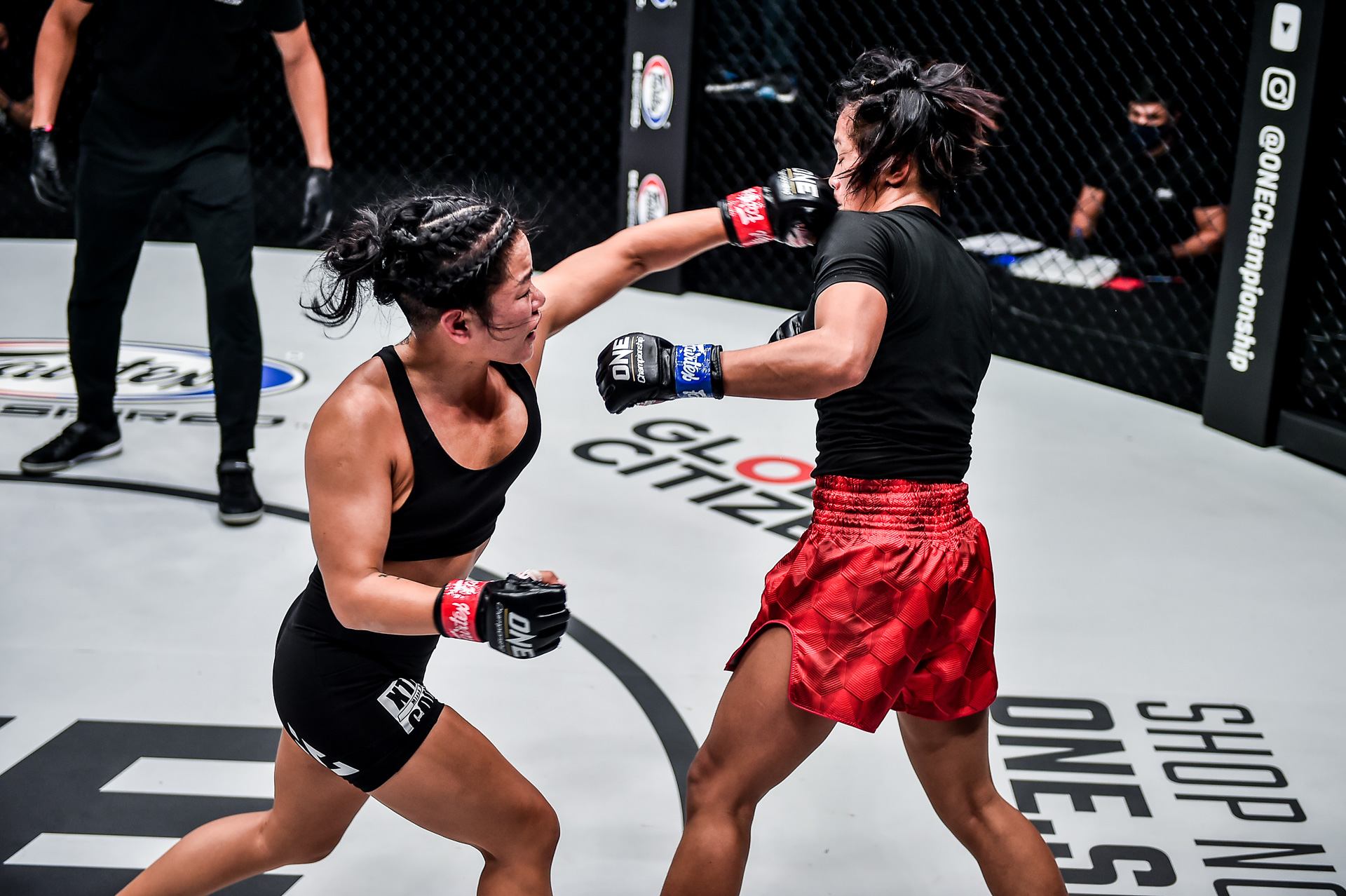 Needing to do something drastic in the third, Nguyen quickly made her move. The Vietnamese-American slipped Olsim’s combination and used her rival’s momentum to score a takedown and land in side control.

While “Killer Bee” was successful in getting the match to the ground, she had difficulty keeping it there, as Olsim once again powered out. As they separated, the Team Lakay phenom landed a body kick.

Nguyen tried to replicate that success in closing the distance by coming forward again, but the Filipina was more prepared this time, tagging her rival with a short uppercut to keep her at bay.

Now getting her timing on the feet, Olsim utilized her reach advantage to frustrate Nguyen, who kept looking for her overhand left to change the complexion of the match. 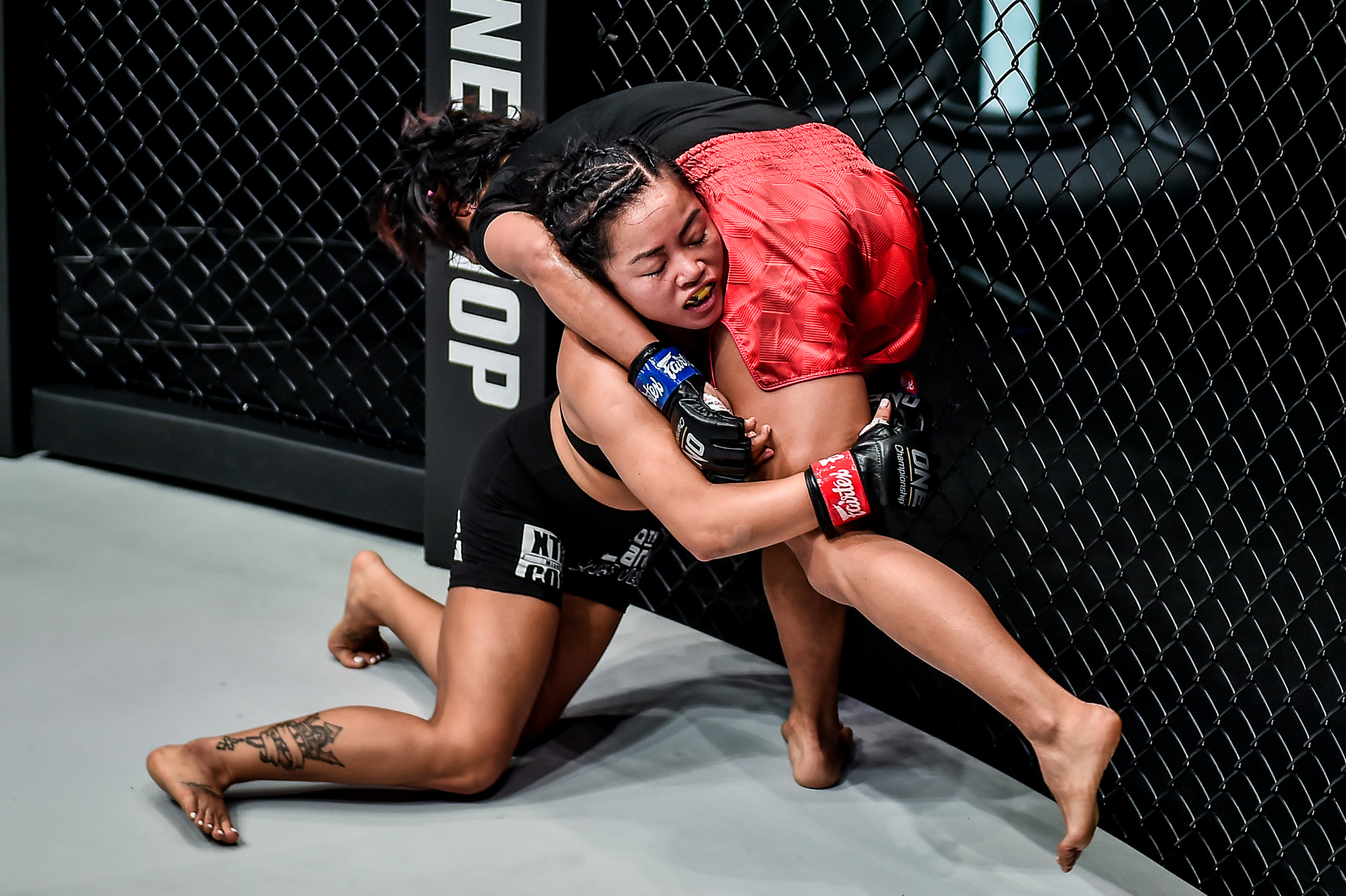 Sensing that a knockout was not in the cards, “Killer Bee” tried to force the match to the canvas once more, but her young opponent continued to fend off those attacks. The Filipina star was clearly in control — though Nguyen almost had her moment as time ticked down.

With roughly half a minute remaining in the tilt, the Vietnamese-American executed a beautiful hip toss, and then she mounted Olsim and landed some clean punches. Though the Filipina slid out, Nguyen hopped into guard and threw a few more punches before the final bell sounded.

However, that last flurry was not enough to trump Olsim’s solid work on the feet throughout the bout. That work, which included the magnificent second-round knockdown, proved to weigh more in the judges’ eyes.

As a result, Olsim notched her second straight win in The Home Of Martial Arts and added her name to the growing list of dangerous atomweight contenders. 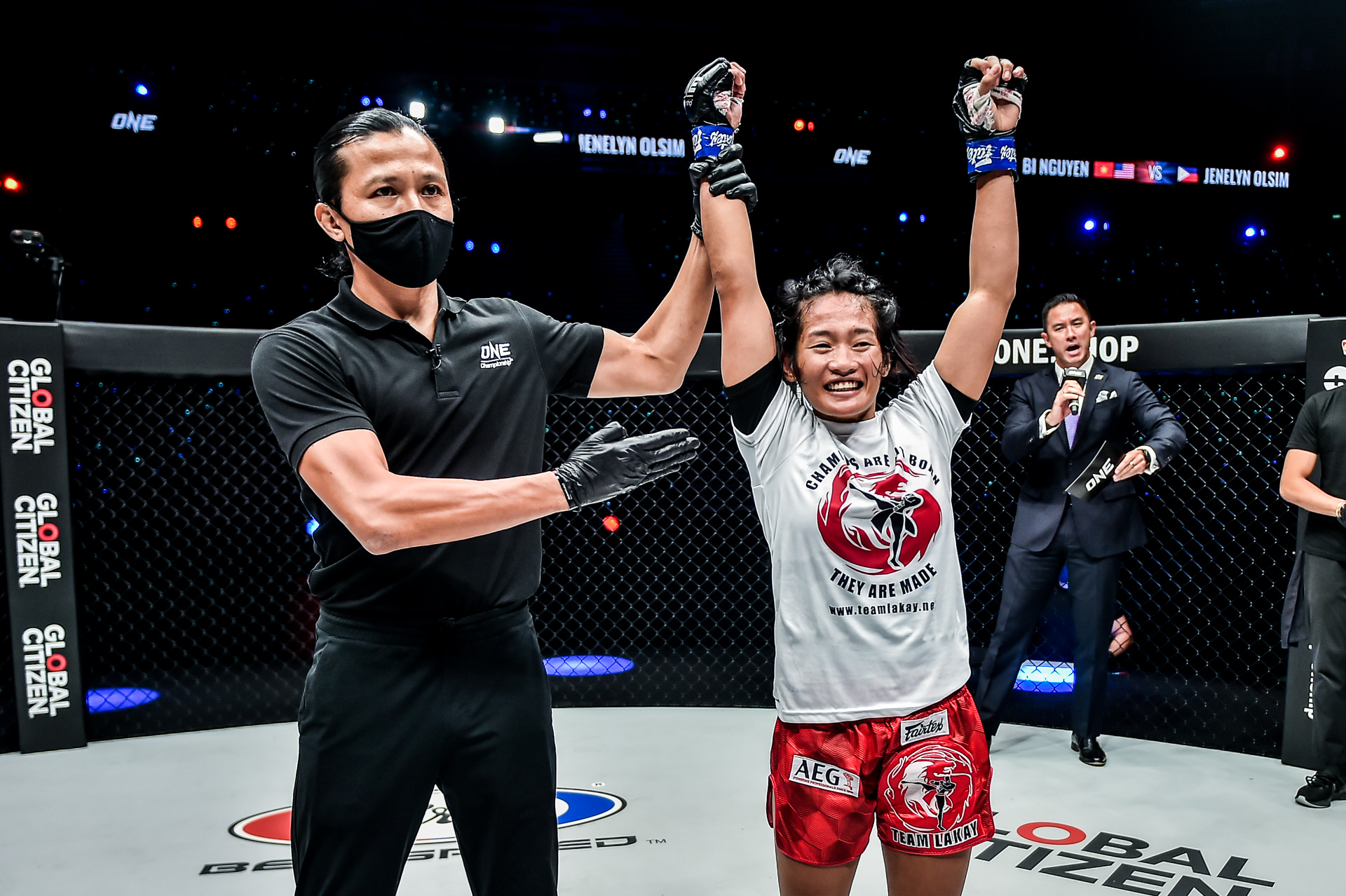