Longtime heavyweight competitor Igor Subora will make his light heavyweight debut when he faces Sherif “The Shark” Mohamed at ONE: QUEST FOR POWER, which broadcasts from the Jakarta Convention Center in Indonesia on Saturday Night, 14 January.

An exciting prospect, Sherif is making his promotional debut, and is a former Evolution Light Heavyweight Champion sporting an impressive 8-1 record. Every one of his victories has come before the final bell, with four knockouts and four submission finishes.

Subora notices the sparkling track record, but looks beyond the surface to the level of competition the Egyptian Top Team product has faced. He is confident his electric skill set — a blend of boxing, jiujitsu, and combat sambo — is one Sherif has not seen before.

“I might be the tallest guy he has ever fought,” says the 36-year-old. “I will be much more patient during my fight, and I see my hand being raised at the end of the night.”

For Subora, a Manila, Philippines, resident by way of Ukraine, this will be his first bout in the light heavyweight division. In most cases, dropping down in weight class means a stricter diet, and usually more intense cardio training for athletes.

Subora’s situation is a little different, however. Even though the F.I.S.T.-affiliated mixed martial artist is dropping down in weight, it will be business as usual in the lead up to the fight. He fully expects to look and feel the same at light heavyweight as he did tipping the scales at heavyweight. 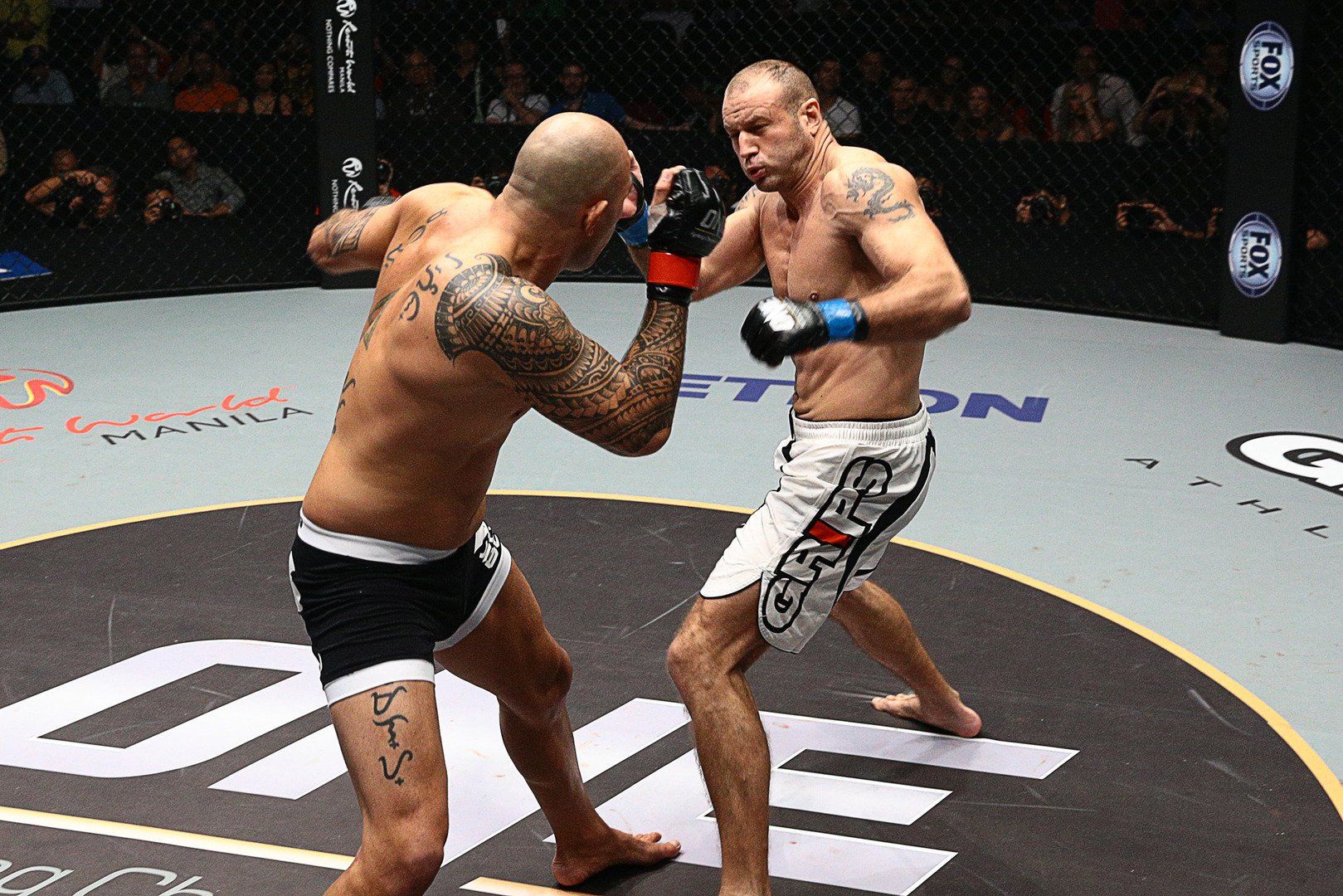 “As some might not know, ONE Championship made adjustments in their weight categories,” he explains. “The light heavyweight category now goes up to 102.2kg, which is my weight, so I do not have to make any adjustments in my diet. I will look just like I did before.”

In December 2015, ONE Championship banned weight-cutting by dehydration, allowing athletes to compete at their natural weight. It was a move that was lauded for enhancing fighter safety and improving long-term health.

It has been quite the martial arts journey for Subora, whose destination surpassed his wildest dreams.

The proud Ukrainian enjoyed his youth in Odessa, a picturesque city which serves as a major seaport on the northern shores of the Black Sea. The family lived by the seaside, and Subora could always be found outdoors with his two older sisters enjoying their time by the water. 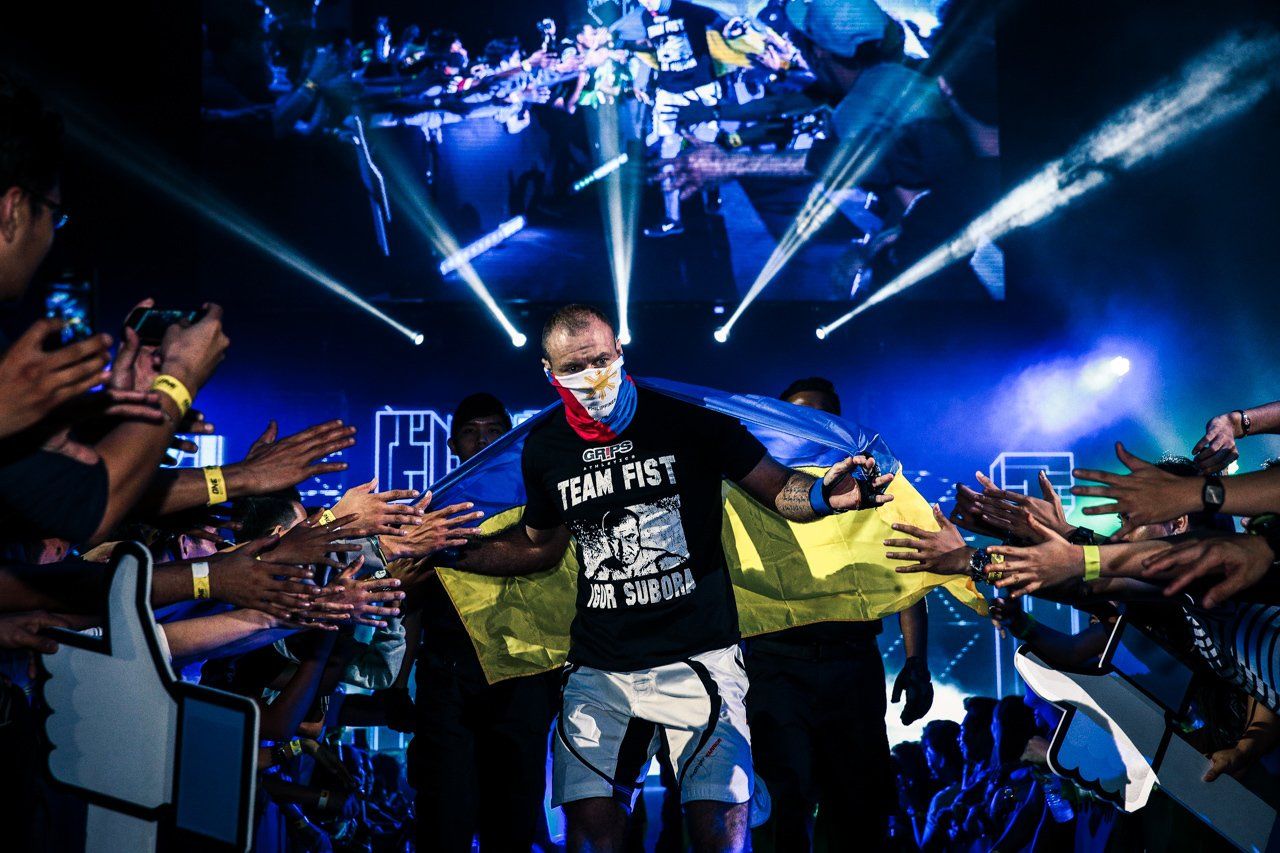 As a young child, he got his first taste of martial arts when his parents enrolled him in judo. But the spark that lit his competitive fire to one day step into the cage happened at a local fight show.

“Back home, it is very common for kids to start sambo or judo at a very young age,” Subora explains. “My father used to take me with him to small shows back in my town. The shows were pankration. It was a fight in the cage with almost no rules. I really liked it, and I told my father one of these days I will be competing in this sport as well.”

That first day came in October 2009, when he made his professional MMA debut with Filipino promotion Universal Reality Combat Championship, otherwise known as the URCC. Although he lost that bout, he bounced back in a major way as he won his next five fights, ending them all in the first round, and captured the organization’s heavyweight championship.

Having been based in Manila since 2008, the country’s adopted son has seen a cultural shift from the way he was received by the locals in the early days of his career to the current acceptance he sees now.

“My fans are mostly here in the Philippines,” he says. “I started here, mostly fighting local fighters. I was always the enemy even though everyone in my team is Filipino. Nowadays, I see people changing their opinion of me as I am competing more and more internationally.” In 2014, Subora signed with ONE and made his debut with the premier Asian MMA organization later that December at ONE: WARRIOR’S WAY against Brandon “The Truth” Vera, who was then making his promotional debut too.

While he tasted defeat at the hands of the future ONE Heavyweight World Champion, the Ukrainian views the high-profile match as his most impressive moment in the cage.

Following his most recent defeat to Alain Ngalani in November 2015, Subora decided to make a change. Although his previous two encounters did not go as planned, his confidence has never wavered. Now feeling refreshed, he is ready to make a dent in his new light heavyweight home.

“Losses never bring me down. I still believe I am the top contender,” he states. “My hand will be raised on 14 January, and I am very excited to showcase my skills in a new division.”