Amarsanaa “Spear” Tsogookhuu can notch the most significant victory of his career at ONE: MASTERS OF FATE, but a giant of Asian martial arts stands in his way.

Next Friday, 8 November, the rising Mongolian star will face Eduard “Landslide” Folayang, who will have the backing of his home crowd at the Mall of Asia Arena in Manila, Philippines.

However, after an impressive ONE Championship debut in February – when he dominated Thai veteran Shannon “OneShin” Wiratchai for three rounds – Tsogookhuu is ready to jump in at the deep end in a co-main event match-up against one of the stars of the global stage.

“He is a two-time ONE World Champion and a great competitor. Also, he is a national hero and the pride of Filipinos,” the Team Amaraa representative says.

“I’ve been following his matches for a while. I’m a fan. It’s an honor for me to face him in the Circle. I’m grateful to ONE for providing me with this opportunity.”

The man from Ulaanbaatar will face an athlete who has competed against some of the world’s best and claimed his sport’s greatest prize. That might make some athletes nervous, but not Tsogookhuu.

Instead, “Spear” is focused on the rewards he can reap if he can get his hand raised on Folayang’s home turf.

“I feel blessed that I’ve got the opportunity to compete against this great contender and World Champion, but being a former World Champion has no negative effect on me,” he explains.

“On the contrary, it’s actually motivating me. It’s a great chance to test myself against the best, a former World Champion, and to see where I am as an athlete. Of course, I will do everything I can to beat him.

“Beating him will bring me glory and honor for sure. That’s why I have to put in every last drop of effort to [defeat him]. I’ve been waiting for this for a long time. I see this as a big chance to prove myself. I don’t feel any pressure or stress at all.”

With that said, the Mongolian is not overconfident. He recognizes that his upcoming opponent is a danger to anyone, especially with the support of his fans behind him.

“He is a very well-rounded martial artist. Of course, home advantage should be counted as one of his strengths,” Tsogookhuu adds.

“He is good at defending takedowns and good at stand-up. He is also fast, which is one of his main strengths. His leg kicks are powerful.”

“Landslide” is also far more experienced – he will equal the record for the most bouts ONE in history on 8 November – but “Spear” believes that may actually work to his advantage.

There are hours of Folayang footage for him to study, and he has done his due diligence to identify the strengths and weaknesses he needs to focus on.

Tsogookhuu has amassed striking accolades – including the 2015 Shidokan Karate World Cup – that suggest he will be ready to go toe-to-toe on the feet, and he has traveled to America to develop the rest of his skills with one of the most respected teams in the world. 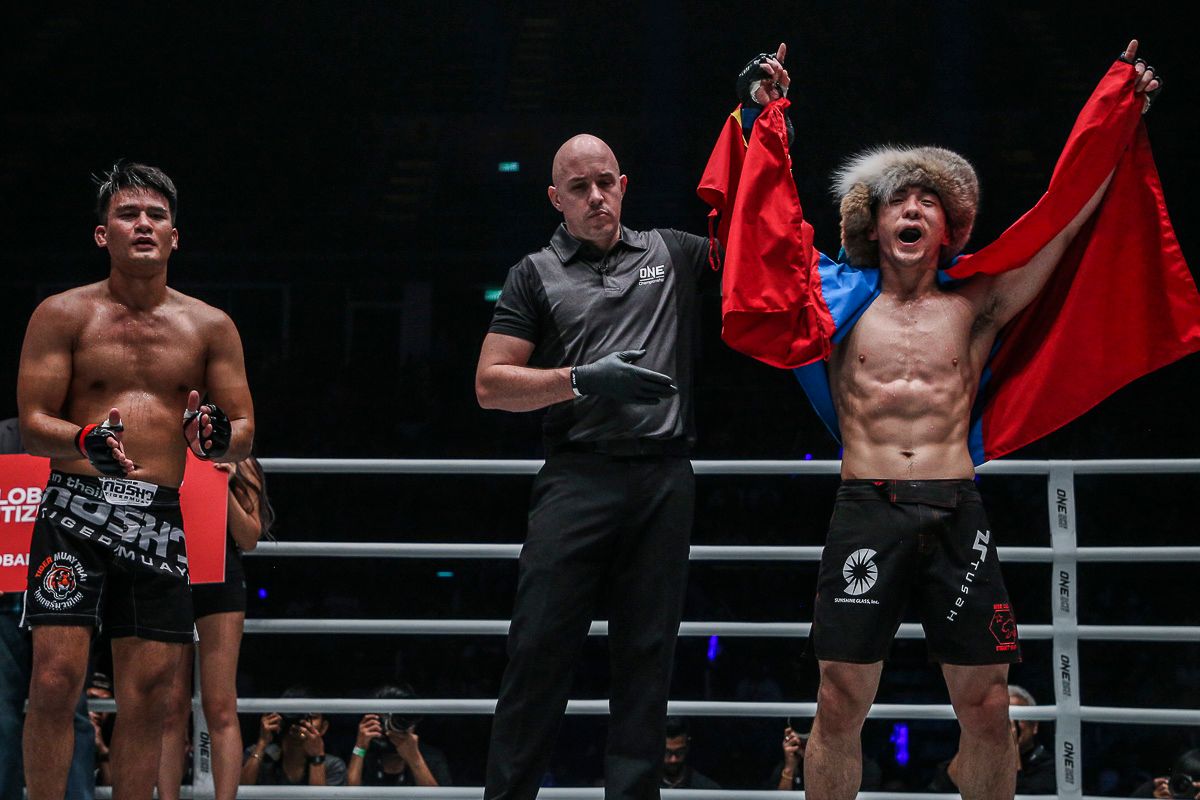 That is why the 29-year-old believes he can get his hand raised and jump into contention for the belt in the lightweight division, despite being just seven bouts into his professional mixed martial arts career.

“I think I do have what it takes to win. I’m not underestimating myself,” he says.

“I’ve been training at Jackson-Wink MMA Academy since 2017, and have learned many things from the world-class athletes there. That’s why I think I have what it takes to win this contest. My abilities and techniques are sufficient to take him out.

“I’m the new generation. I’m a young and hungry athlete who is eyeing the World Championship belt. I’m a young martial artist who is here to succeed you as a top contender. I’m the future.”