Lito “Thunder Kid” Adiwang is the latest ONE Warrior Series (OWS) contract winner to graduate to ONE Championship after a trio of terrific performances.

On 13 October, the Filipino rising star will make his debut on the global stage against Pancrase Flyweight World Champion Senzo Ikeda at ONE: CENTURY PART I.

“Thunder Kid” may be a newcomer to the main roster, but he is far from inexperienced, and he is determined to prove he is now ready to take on the best in the world.

“Using our old education format in elementary school of having first to sixth grade, I think I would say that I’m probably in the fifth grade already – I think I’m almost there, but not quite there yet,” he says.

“I just really worked hard on my craft, just waiting for an opportunity to come. I couldn’t say that I was a complete fighter – I still have a lot to improve on – but I think I had the talent and passion for this.”

The 26-year-old credits his experience on OWS as the perfect opportunity to polish his skills and hit the ground running when he enters the Circle for the first time.

Before his run in ONE’s home for the best up-and-coming talent on the planet, he had competed in the Philippines, Malaysia, and Thailand to build his record with the hope of making it to the world’s largest martial arts organization.

However, despite his 6-2 record, the Team Lakay representative was overlooked by matchmakers, and then was passed over by Rich Franklin and the OWS team when he tried out for the show in Manila in December 2017 – at first.

“There were a lot of us who didn’t get selected – other teams were chosen over us. It was a huge setback,” he says.

“However, I think it was a good challenge for us mentally. We learned to understand that this sport isn’t all about who’s the strongest physically, and that if you really want to make it in life or become a champion in a sport, you have to be mentally tough to never give up no matter what happens.

“That is what we came to prove, as we continued training until they came up to Baguio and took us in the program.”

Adiwang was nothing short of spectacular as he won his first two OWS bouts via first-round knockout.

Then, although he was initially disappointed that he did not finish his match against Anthony Do in August, on reflection, there were plenty of positives to take away from what was his most complete performance.

“Those three bouts, especially the last one, really taught me a lot. I saw the holes in my game that I needed to improve and the mistakes that I’m prone to make,” he explains

“In my last fight, I was really upset when it was over, because I knew that I could still do a lot, but I wasn’t able to show it because of fatigue.

“Thunder Kid” is now grateful that he did not get rushed into a match at one of The Home Of Martial Arts’ marquee events before he had the chance to get some extra seasoning.

Though he thought that was a setback, he believes the experience he has had since he first stepped through the OWS ropes last October has made him a far better athlete, and now he can make his ONE debut at the biggest event of all.

“I don’t look back with regrets that I didn’t get a call then because I think this is the perfect time for me to join the big leagues,” he adds.

“The exposure I got because of the hype they built for my matches and the opportunity to introduce me to fans was really unbelievable.

“I became known internationally because I competed outside the country. Locally, I wasn’t really well known, but after being part of OWS, people are suddenly interested in me.

“I think it’s a huge help for those aspiring to make it well in the main roster. I’m just one of the examples. I think that if I immediately joined the main roster, I wouldn’t have the right mindset and skills.

“OWS can be a great stepping stone where one could hone all these skills until they are really ready for bigger competition.” 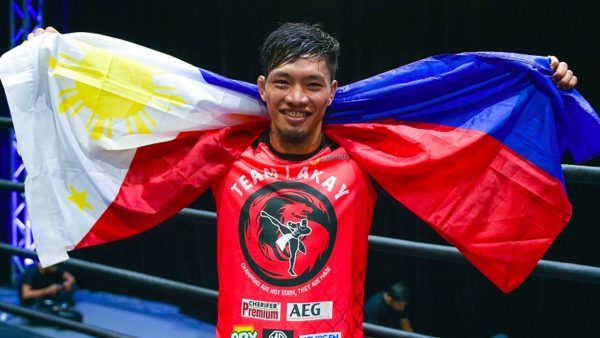