The American edged out her rival, two-sport queen Stamp Fairtex, in their main event rematch at ONE: KING OF THE JUNGLE to earn a split decision victory and claim the ONE Atomweight Kickboxing World Championship belt.

Now, nearly 10 days removed from that magical night in the Singapore Indoor Stadium, the 34-year-old has returned to California, USA and she is already sharpening her elite skills.

While it was tremendously difficult to dethrone the Thai superstar and win the kickboxing crown, “JT” knows it will be even tougher holding onto it in the future.

In this exclusive interview, Todd reflects on her big World Title victory, reveals the emotions behind her stellar performance, and explains how she can keep the gold for a very long time.

ONE Championship: First off, congratulations on your big win! How does it feel to be the ONE Atomweight Kickboxing World Champion?

Janet Todd: It’s still a bit surreal to me seeing that belt in my house. It’s really a dream come true for me, but I know it doesn’t stop there. I know I have a target on my back now, so it’s time to work even harder than I have before to keep it.

ONE: Leading up to the rematch with Stamp, you talked about wanting to start the bout with more confidence. How important was that to your game plan?

JT: That was one of the biggest lessons I learned from the first bout with Stamp [in February 2019]. I think because I was a newcomer to the promotion, I didn’t have the confidence that I had coming [into the bout] this time around.

ONE: Stamp got her kicks going in the middle rounds, which seemed to disrupt your rhythm a little bit. How were you able to adjust to that?

JT: I stuck to the game plan. I wanted to get in and get out, and I think Stamp did a good job of kicking me on the way out.

It was hard for me to block [her kicks] as I was moving. She did what was appropriate for what I was doing. I still stuck to the game plan of coming in as I wanted to and getting out when I could. I don’t feel like it really deterred me.

But I want to say that the first thing I did when I came back to the gym was practice checking kicks with my movement, so it was definitely a lesson learned. I’m not letting that happen again.

ONE: It was a very close contest heading into the last round. What did your corner tell you going into those final three minutes?

JT: It was pretty much to go out and leave it all out there. I kept my guard tight and came in with my hands. 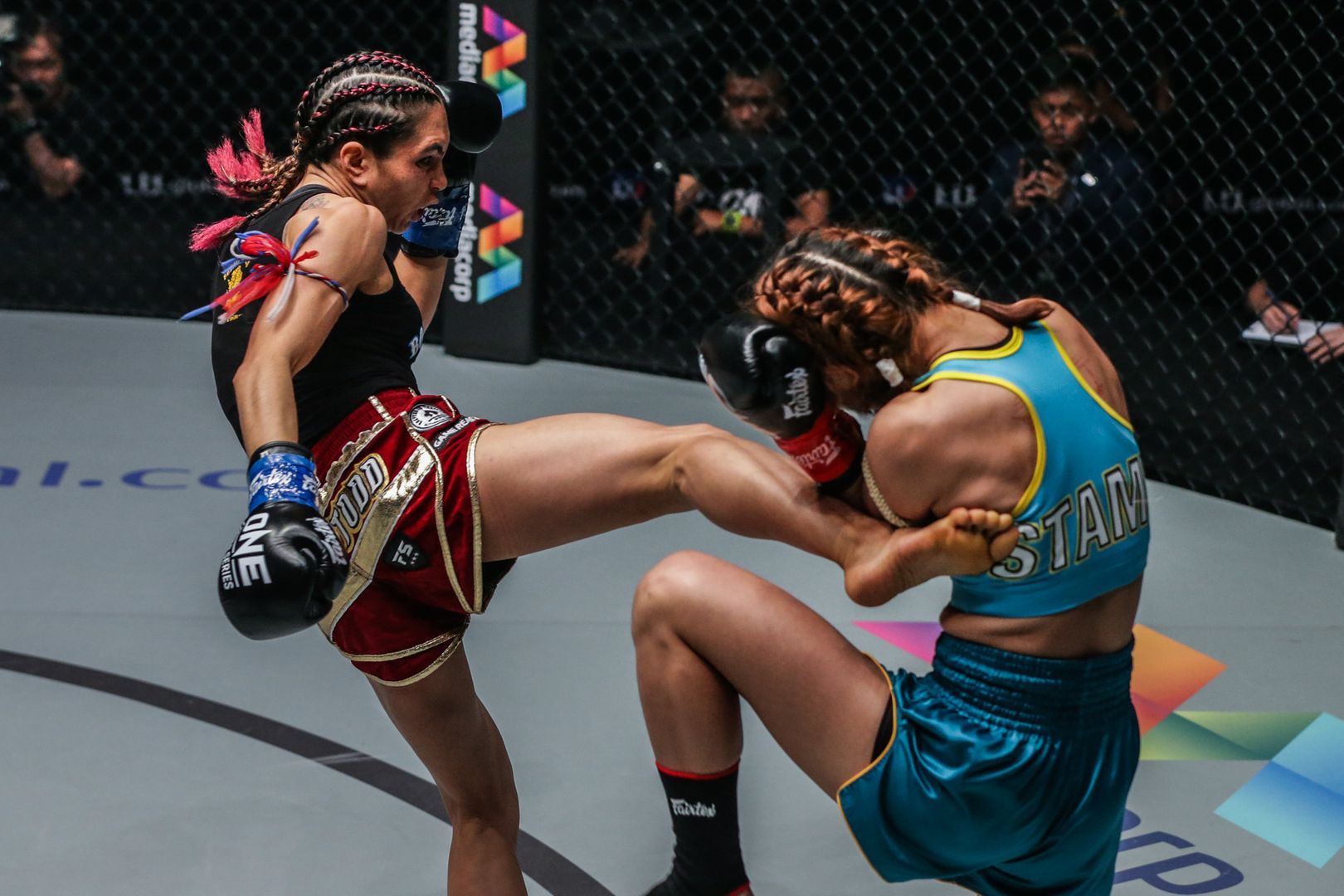 ONE: This was also the first time ONE Championship held a closed-door event. Did competing without an audience present any negatives or positives for you?

JT: I don’t know if it had any negatives. I think the positive thing was that it was so quiet I could hear my corner very well. I can easily hear my corner when I fight, but it was crystal clear. I think that was definitely a benefit.

Again, it [stinks] not to have the energy of the crowd. I hope for the next fight the whole coronavirus stuff is over. I feel bad for what’s going on over there [in Singapore] because you could tell it really took a hit on tourism, and there weren’t that many people out.

I feel bad for everybody being affected by the coronavirus, but I hope next time we can have a full stadium because I do love the energy of the crowd.

ONE: When Dom Lau declared you the new ONE Atomweight Kickboxing World Champion, what went through your head?

JT: Usually, when it’s a split decision, it goes in favor of the defending champion. I just remember standing there saying, “Just say blue or say new, new, new.” And then when Dom said, “And new,” I was like, “Oh my God!” It was a dream come true! 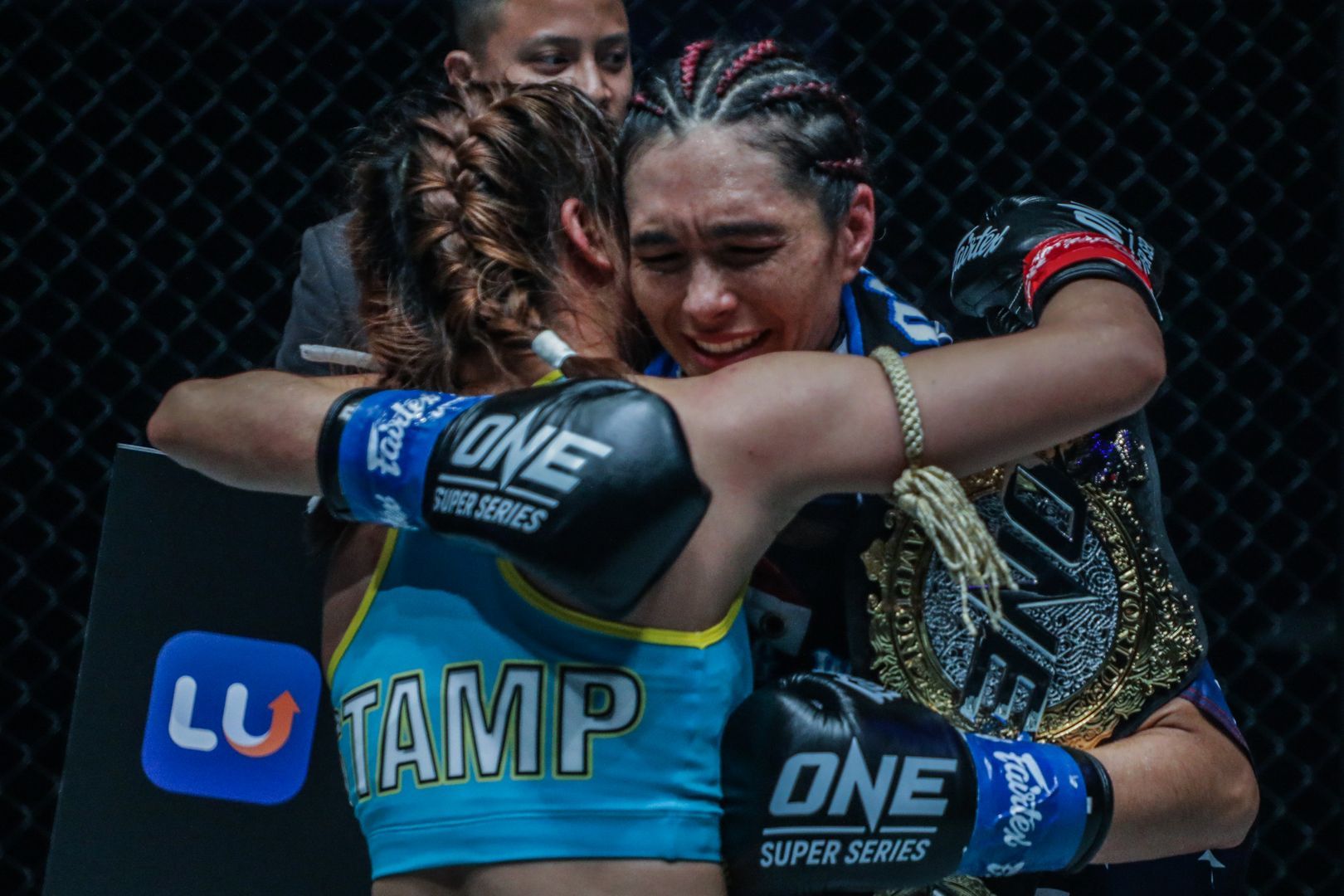 ONE: What do you think was the difference that led to you getting your hand raised?

JT: I think the footwork really made the difference. I was more accurate with where I was hitting, and I was also making her miss, which I think edged me out a little bit more. That was the game plan, so I was pretty happy about that.

ONE: When you arrived back home in California with the gold, what was everyone’s reaction?

JT: My husband met me at the airport with flowers, and my dad hasn’t really sketched anything in over a year, and so he actually made me such a cool poster when I came home. The drawing of me, he made sure to put in a six-pack for my abs and it has “Congratulations” on it (laughing).

It’s really cool to be able to share the victory with my family and teammates, and being able to share the belt with everybody. It wasn’t just my hard work, but it was the time and sacrifices that everybody put into me to make sure that I was at my best. The belt was for all of us. 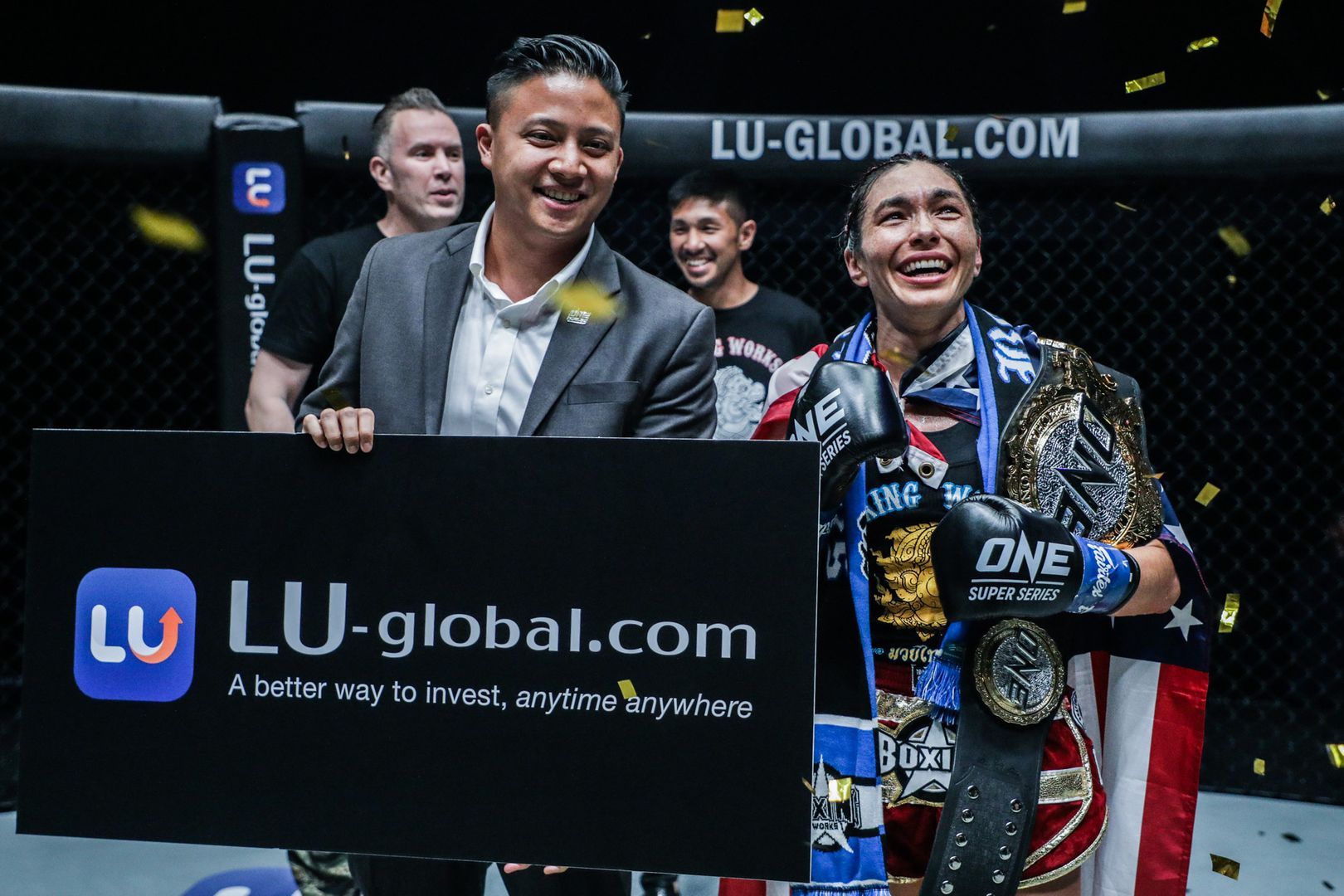 ONE: Earlier, you mentioned having a target on your back. Now that you are the atomweight kickboxing queen, what is your plan moving forward?

JT: Like I said, on Monday, I was back in the gym working on checking kicks so that won’t happen in the next fight. Like any other fight, there are always things that need to be worked on.

It’s going through that same process: watching film, seeing where I need to grow, and making sure I put in the time in the gym and doing the repetitions to get better at it.

I know that I need to work harder now than ever to really keep that belt. There are no easy fights at this point. I have to keep evolving just like everybody else.