Before he joined ONE Super Series, Azwan Che Wil made a stellar run through Malaysia’s Muay Thai circuit.

In a span of nine years, he competed in 45 bouts and even won the OneSongChai S1 Championship in Bangkok, Thailand.

To many of Malaysia’s aspiring Muay Thai practitioners, Azwan is the ideal prototype – he is an athlete who has sacrificed everything for the chance to represent his country on the global stage.

Now, take a look back at the striker’s early life in rural Malaysia to find out what drove him to pick up “the art of eight limbs” and how he used his passion to pull his family out of poverty.

The Son Of Rubber Tappers

Growing up in Manek Urai, Kelantan, a small town in the northern region of Malaysia, Azwan never knew what it was like to own new toys or go on family vacations.

His parents were rubber tappers who worked tirelessly to make ends meet. Combined, they both made about RM1,800 (US$410) per month – barely enough to support the future martial artist and his five siblings.

Despite their financial challenges, his parents did what they could to give their children a comfortable lifestyle.

“To us, having new school uniforms or getting some used toys felt expensive,” he says. “We felt privileged. But if I were to look back, it was definitely a hard time.”

Without much entertainment at home, Azwan spent his time studying.

He rarely ever got into trouble, but there were a few instances when he engaged in altercations with other kids.

“I did alright in primary and even secondary school. I wasn’t so much of a troubled teenager, but of course, at times, we would get into some quarrels. It’s part of growing up,” he explains.

“My teachers never had a problem with me. I’d just do my work in school and wait until my father fetched me with his old motorcycle.”

An Early Love For Football

The youngster gravitated towards sports, and one activity he looked forward to every day after school was playing football with his friends in the evening.

Kelantan, a rather laidback state compared to Selangor or Kuala Lumpur, has always been one of the biggest footballing states in Malaysia.

In fact, almost every kid’s dream in his tiny town was to one day become a professional football player.

“Everyone loved football. It was the only sport evident across my village,” Azwan says.

“We would have roughly about 10 to 12 guys, all playing in the mud barefoot. It was really fun, and a good way to let loose after studying.”

Azwan also competed in hockey and handball, and he even ran track. The Malaysian excelled at sports, which is something that made him very proud.

“I was quite a famous athlete in school,” he boasts.

Entering The World Of Muay Thai

Azwan discovered Muay Thai when he was 13 years old.

One day, he was switching through channels on the television when “the art of eight limbs” caught his attention, and he subsequently watched a couple of matches.

The next day, while he was on his way back home from school, he noticed there was a Muay Thai academy in his town.

“I spotted this gym called N41 Manek Urai,” he recalls. “From the outside, I could barely tell what the purpose of the gym was. But then it clicked in my head that what I watched on television the night before was similar to what these guys were doing in the gym.”

The Kelantan native saved up his money and one year later, he walked into the gym and began learning the craft. Barely a month into his training, the head coach believed Azwan could go on to do great things in Muay Thai.

“I started to train for fun. My coach, who traveled from Thailand, assessed me after a month and realized that I have the potential to go far,” the Malaysian says.

“He told me I could be a good fighter, but I didn’t know what I was getting myself into. I didn’t know a single Muay Thai athlete. I just saw two people fighting, and I fell in love with what they did.”

Azwan’s parents supported the decision and, just like that, his professional career was born.

Supporting His Parents Through “The Art Of Eight Limbs”

After five months of training, Azwan’s coaches felt he was ready for his first Muay Thai bout.

He experienced difficulties throughout his training camp and even found it hard to sleep the night before his big debut.

“I was struggling mentally and physically in the lead-up to this match,” he says. “I froze for quite a bit in the first round, but once the nerves settled down, I unleashed whatever I practiced in training to perfection.”

Ultimately, he powered through his issues and secured a third-round knockout.

The win was unforgettable, and what made it even more memorable for the Kelantan native was that he pocketed RM500 (US$115) for the victory.

“I didn’t know what to do with that sort of money. I never held that much money before, but I immediately handed out RM100 to each of my parents to ease their burdens,” he says.

“I used the balance for breakfast and lunch in school, alongside purchasing whatever toys I’ve always dreamed of owning.”

What initially started as a hobby now became a potentially lucrative career.

Azwan knew if he continued to develop his skills and secure bigger matches, then he could earn larger paychecks and financially assist his family. That motivated him to pursue this avenue more deeply.

“I started Muay Thai to help my parents get some money for the house,” he offers. “I always wanted to give back to them because they supported every decision I made, even as a small boy.”

The Call To The Circle 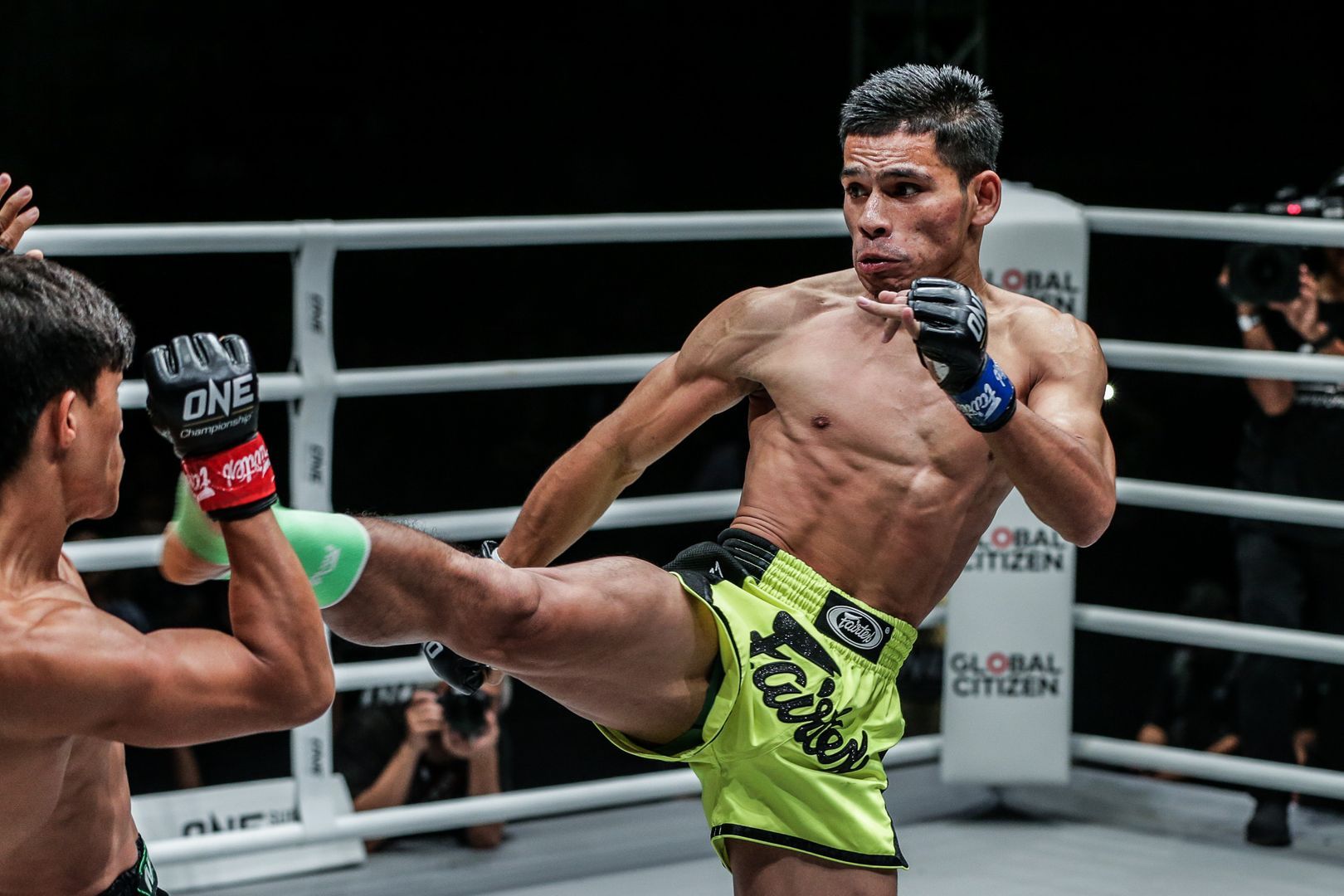 In 2018, Azwan found his way into the world’s largest martial arts organization. But initially, he did not know the promotion had just launched its all-striking branch called ONE Super Series.

One day after competing in Kelantan, he received a message from Malaysia’s first-ever female mixed martial artist, Ann “Athena” Osman, who was recruiting up-and-coming talent.

“Ann messaged me on Facebook to tell me that she wanted me to represent Malaysia in ONE Championship. I was taken aback, as I didn’t know how to fight in mixed martial arts,” he recalls.

“But she explained to me that it was for a Muay Thai contest. I did not hesitate and immediately accepted the offer. Later that night, I realized ONE was now the home to several Muay Thai legends, and I felt this was going to be a big break in my career.”

From being raised by rubber tappers to tapping into his own greatness, Azwan is now one of only three athletes to represent Malaysia in ONE Super Series. The others are his friend, Mohammed “Jordan Boy” Bin Mahmoud, and Saiful “The Vampire” Merican.

If his journey to the Circle tells us anything, it is that we can expect much more from this 24-year-old warrior in the future.