As the leading women’s athlete from Team Lakay, Gina “Conviction” Iniong is a martial arts role model in the Philippines. However, if she keeps winning her mixed martial arts contests, she could become a global icon.

Ahead of her pivotal return to the Mall Of Asia Arena in Manila, Philippines, discover how the 30-year-old became one of her nation’s most respected athletes.

Iniong grew up in Baguio City, Philippines as one of 10 siblings – seven girls and three boys – in dire circumstances.

“Our parents used to sell plants as our main source of income. However, plants don’t sell well, so they decided to shift into selling keychains.

“My parents are no longer selling keychains now, but our eldest sibling is the one who decided to continue this livelihood.”

While she competes under the name of Iniong, “Conviction’s” birth surname is actually Pasigon. However, she decided to adopt the first name of her grandfather in order to follow in the footsteps of her father, who switched names when he was growing up.

“Then, I don’t know, [people would] say the Pasigons are wealthy, so my dad decided not to use that last name and chose to use my grandfather’s first name instead. That’s why I’m using Iniong.”

Rising To The Challenge

After boxing for two years in high school, Iniong’s coach was replaced by a member of Team Lakay.

That association eventually led her down the path to The Home Of Martial Arts.

“When I was about to graduate high school, our coach changed. He was replaced by one of Coach Mark [Sangiao’s] students,” she explains.

“He then asked if I have plans to go to college. I said I would love to, but we lacked in the financial aspect. He then told me I should join Team Lakay because they have wushu scholarships.

“I was introduced to Coach Mark, and he said, ‘Compete in the nationals. If you manage to get gold, I will get you in.’”

Iniong went on to claim the gold and secured the wushu scholarship she needed in order to attend college.

She took a course in criminology so she could follow her dream of becoming a police officer like many of her relatives, but her coachability and rapid development led Sangiao to offer her a route into mixed martial arts, and she has never looked back.

“Coach Mark saw my potential and urged me to try,” she recalls. “My first bout for mixed martial arts was in Baguio. It all continued and led me here to ONE Championship.”

Support From, And For, Her Parents

Iniong’s parents were not initially thrilled to find out their daughter was pursuing a career in the Circle.

“Of course, that’s normal for parents because they take care of their children,” she says. “I once went home with a black eye – two, actually. [My mother] wanted me to stop, but I am too hard-headed. Whatever I want, I’ll just do it anyway.”

Despite their reservations, when they saw their daughter compete, they came around to the idea, and her dad is now one of her biggest fans.

But in early 2019, “Conviction” was forced to send the support the other way. Her family discovered her mother was seriously ill with stage 5 chronic kidney disease, and they pulled together to help her out.

Iniong got the news before her bout with Jihin “Shadow Cat” Radzuan at ONE: CLASH OF LEGENDS in February 2019. When the Filipina stepped into the Circle for battle, she was inspired to succeed for her mother.

“When we found out about her condition, we were all shocked because it was so sudden,” she recalls.

“For us, if you have a problem, we are there for you. No matter how hard it is, the whole family will be there to support you.”

Iniong dedicated that bout to her mother, and she wound up defeating Jihin by split decision.

Carving Her Own Path

Iniong is one of the few ladies in an otherwise all-male squad at Team Lakay, but that has not been a barrier to her rise through the women’s atomweight ranks.

“We are like siblings in Team Lakay, and Coach [Mark] is our father. If one has a problem, everyone is there to support that person. We help each other,” she says.

“I was told that during training, I should forget that I am a woman. I should think I am a man. When I’m outside the gym, that’s where I can be a woman, but if we are training, we must really train hard.

“In training, they don’t treat us like babies. My partner is a man. In sparring, my partner is a man as well. We don’t stop sparring even if my nose is bleeding. We continue until it’s over.”

In fact, the dynamic in the gym may actually work to her advantage when she competes against her peers.

“There are benefits to training with men. For instance, when you are going to fight with a woman, you are sure to overcome that because your partners in the gym are all men,” Iniong explains.

The Filipina is also inspired by the success of her training partners – who won a record four ONE World Titles in 2018.

She wants to make proud those who have helped her on her martial arts journey by emulating their achievements – and that would be a first for a Filipina in the world’s largest martial arts organization.

“I get my strength to continue from seeing my teammates and my seniors with their belts,” she says.

“My ultimate goal is to also become a champion and Baguio’s pride. We don’t have a female champion yet, particularly in mixed martial arts.” 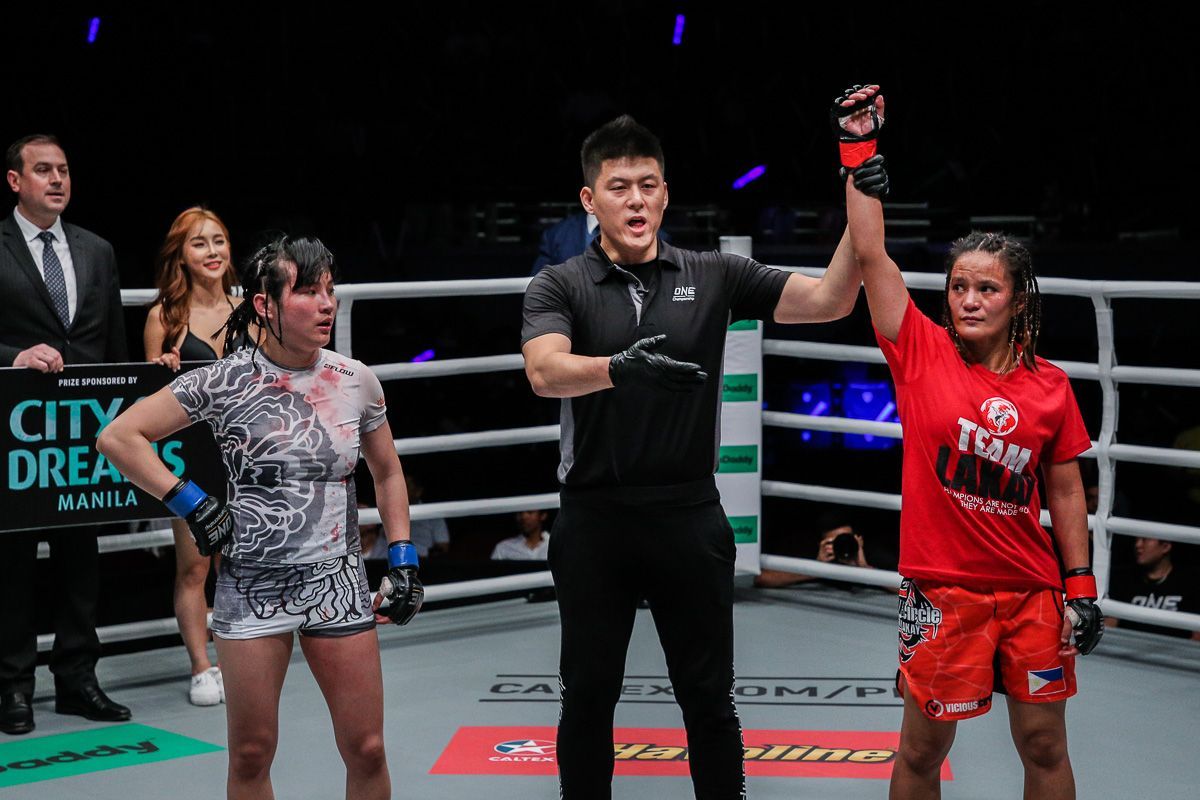 Iniong loves her heritage and is glad to be a Filipina. She hopes her performances inside the Circle can inspire others back home to pursue their dreams and experience the life-changing benefits of martial arts.

“I am proud to represent the Philippines in every fight because we give inspiration to our fellow countrymen who also want to fight – particularly those women who sent me messages saying, ‘How can I do this? How can I start mixed martial arts? I also want to be like you,'” she says.

“I am happy with what I’ve been able to achieve – particularly because I am able to inspire other people, especially other women. Even though this sport is male-dominated, women are still able to get in and achieve a lot.”

A win against Roka at ONE: FIRE & FURY will elevate her standing in the women’s atomweight division and bring her closer to a World Title shot.

If she is raised onto a platform like that, Iniong can be sure her influence will grow even further.