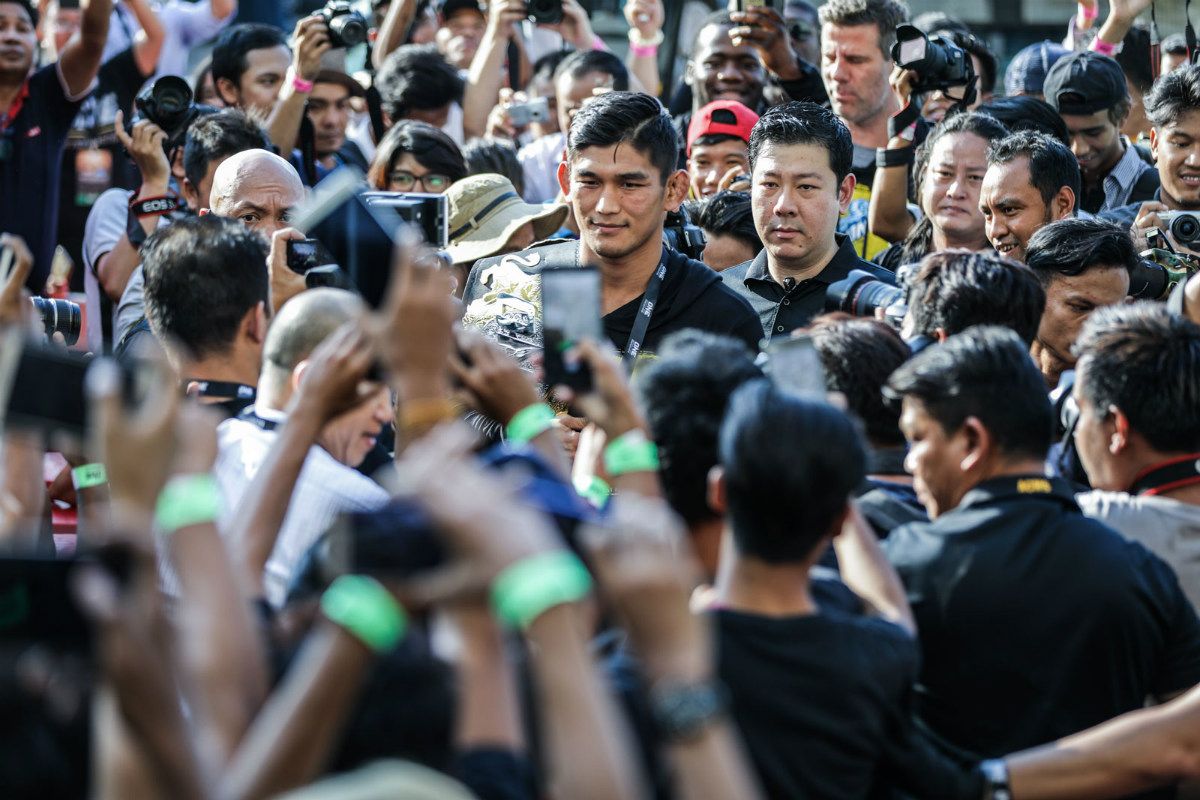 No athlete in the world of martial arts – or possibly any sport – is idolized by their compatriots like Aung La “The Burmese Python” N Sang.

The ONE Light Heavyweight and Middleweight World Champion is mobbed whenever he walks around in his homeland, and the country comes to a standstill when it is time for him to compete.

He has also had a giant bronze statue made in his image in his hometown.

The humble warrior was taken aback by this news.

Because he is still a defending two-division World Champion with a defense of his middleweight belt against Ken Hasegawa at ONE: A NEW ERA upcoming, and he still believes he has a lot to achieve, Aung La N Sang was not sure how to react.

“It’s crazy. It’s super crazy. I don’t even like to think about it much,” he says.

“I don’t even want to look at the photos of my own statue. It’s a little weird to me, but I understand why the elders from my state did it because they want to encourage the youth.

“If you put your mind to it, you work hard, and you’re diligent, you can be a World Champion as well. I get that.

“On a personal level, it’s kind of weird to me. I don’t feel myself as that important or better than anybody else.”

As strange as it was to see a massive statue made in his image, Aung La N Sang reached a turning point when he attended the ceremony in December, and thousands of people showed up for the unveiling.

“The whole ceremony was very humbling. It was very cool,” he says.

“There were 10,000 or 20,000 people, there were kids, people of all ages, people from all walks of life. They had a parade. They sat in front of us, and I had to talk and do a demonstration.

“At the end of it, the coolest thing was that all of us shared a meal together.”

It was during that ceremony – stunned by some of the reactions he saw – he realized how much a symbol like this meant to the people of Myanmar.

Aung La N Sang splits his time between Myanmar and the United States, where trains at Hard Knocks 365.

Right now, the level mixed martial arts training facilities in his homeland is still developing, but it is a longstanding goal of “The Burmese Python” to use his influence and raise the standard.

“I want to change that one day. That’s what inspires me and what pushes me to work hard,” he adds.

He never contemplated having a monument erected in his honor – particularly when he believes he has so much more to achieve in his career – but now it is a reality, Aung La N Sang takes it very seriously.

“The Burmese Python” knows how much the people in his home country look up to him and are inspired by him.

Because of that, the 33-year-old’s resolve to stay hungry and humble was strengthened.

He renewed his vow to stay humble keep the same focus he has always had. By doing that, he can build on the success that has made him an icon and continue to be the best role model he can be for his countrymen.

“There’s a lot of pressure to it. My family keeps me grounded. My wife and my son keep me grounded. They keep me level-headed,” he says.

“’National hero’ – they made me that. I don’t feel like I did anything to deserve that, but I always focus on the task at hand. I don’t overly put pressure on myself.

“What I say and what I do is seen through a microscope over there. So everything I say and do has to be positive, and it has to be encouraging to other people. I never ever post negativity on social media. I try to be as positive as I can.”

The statue may seem a bit strange to him right now, but Aung La N Sang knows one day his career inside the cage will be finished.

When that time comes, there will be a permanent reminder in his motherland about the great feats he has accomplished. Whatever the result of his rematch with Hasegawa on 31 March in Tokyo, Japan, he has earned the love and respect of his people.