As well as being the most dominant World Champion in his sport’s history, Demetrious “Mighty Mouse” Johnson is known for embodying the true essence of a martial artist – inside and outside the cage.

His signing with ONE Championship was no surprise to fans as his values are so closely aligned with the world’s largest martial arts organization — he epitomizes integrity, humility, honor, respect, courage, discipline, and compassion.

“Mighty Mouse’s” commitment to these traits were never fully appreciated as a World Champion in North America, but fans in Asia revere the flyweight legend for his approach.

Johnson did not, and does not, change his ways. His approach to his professional career matches his everyday life and the path he forged growing up. That is just who he is.

“It’s how I am generally. I’m not a big talker. I like to just train, show up, do my thing, and let my performance speak for itself.

“I just go and be respectful, give it my best, and go home. It’s been that way my whole career, and it’s never going to change.”

The AMC Pankration athlete is renowned for his industriousness. He doesn’t cite any genetic gifts for his success, just his ability to work hard and keep on learning.

His deaf mother raised him by showing him, first-hand, he could overcome any obstacle with the right mindset. That approach reaped rewards in his everyday life, and then on the mats when he began to dedicate himself to his training.

It was an honor to receive my brown belt from @bibianofernandes & Matt Hume tonight. Now the journey continues to black belt! #teamamc

“My work ethic came before martial arts,” he states.

“When you have a parent who is not in the best financial situation, you learn quickly that if you want things, you have to go out and get them yourself.

“I would go and work on a golf course at 14 to be able to do things at the weekend. I didn’t have anybody paying for me or giving it to me. I went and worked hard, and that set me up to be successful in mixed martial arts.”

Johnson battled his way to his position as the best flyweight in the world while working full-time and raising a family. Eventually, he was able to leave his day job, but the lessons stayed with him.

“You have to be very disciplined to go to the gym every day and keep learning — to do those extra rounds when you’re exhausted and tired.”

He went the extra mile extra to get ahead. There was no magic formula, no gifts, and no easy roads. Everything he achieved was a product of consistency, discipline, and hard work.

The way he has lived his life is nothing out of the ordinary to him – despite what his extraordinary achievements and ability in the cage suggest. That is why the down-to-earth World Champion is surprised when he hears how he has motivated others.

“I just trained and kept showing up, so it’s shocking to me when I hear people say that.”

That humility has kept him striving for improvements, and it has made him evolve at an overwhelming rate.

It allowed him to stay at the top of the mountain for so long, as he defended his UFC Flyweight World Title a record 11 times.

“Everybody’s story is different,” he offers.

“I can’t give you one thing — I just got up off my butt and went to the gym. I wanted to be there, so I worked hard.”

It seems like a simple message, but it’s the common thread between athletes at the top of the sport. Hard work and discipline can overcome any obstacle.

After a long wait, fans will be get to see how Johnson’s approach works when he performs on the global stage for martial art for the first time on 31 March, when he takes on Yuya “Little Piranha” Wakamatsu in the quarter-finals of the ONE Flyweight World Grand Prix at ONE: A NEW ERA. 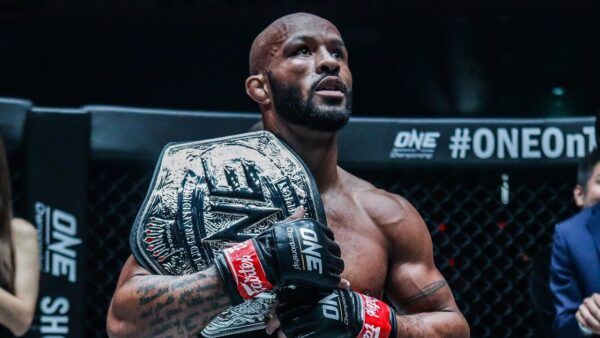