As we continue to invest in building up athletes, the spirit of giving has become a recurring theme throughout ONE Warrior Series (OWS).

Embedded in their communities and immersed in different cultures and customs, I often come away with valuable experiences and takeaways.

This makes giving back equally important to all of us here at OWS.

Heading into our fifth season in 2020, we’ve got a pretty consistent rubric of what makes a destination not just an experience, but also an avenue where OWS can contribute in return.

Because nowhere in all of sports is the humanity of its competitors laid so bare like in mixed martial arts.

The best part of traveling for ONE Warrior Series is connecting with the community. We worked with @shoes4flores to provide some shoes, school supplies and soccer goal to the kids at this school. #blessed #ows #onewarriorseries #richfranklin #givingback

Through the struggle for acceptance, the financial hardships, and overcoming tragedy, what shines the most are the values of compassion, perseverance, and honor as athletes strive for the betterment of themselves and help give back to their communities.

Take OWS prospect Allan Albindo, who grew up among farmers plowing the corn and rice fields in Cebu, Philippines.

Trained in the Filipino art of Yaw-Yan, Allan flashed promise. Better yet, he personified the raw grit that is essential to not only breakthrough, but also to cope with the pressures and difficulties that will follow.

Living within modest means on the outskirts far from the metropolitan space, it can be hard to get noticed or even find people to train with. And, just as surely as the lion gave the antelope his speed, we believe Allan was shaped under these conditions to become an even greater athlete than his circumstances would have allowed.

It is, of course, our hope that this promise can translate and grow into breakout relevance with us at OWS. It’s the very same hope that each of our athletes and their communities have for one of their own to achieve success.

Anyhow, as part of the day’s activities, we took Allan out canyoneering at Kawasan Falls – a picturesque trek through the woods that ended with a climb up a beautiful series of ascending waterfalls.

Out in the open, it was our chance to connect with nature and the idyllic life inherited by many of the rural natives. It was a literal dive headfirst into the beauty of simplicity, away from civilization.

After a few jumps off some 15-meter cliffs into clear water, it was clear that Jonathan Fong (Director of OWS) had made progress with his fear of heights.

Unbeknownst to us, Allan and the kids at his gym had never been to a movie theater. So, we gathered the group of kids and surprised them with a trip to watch Captain Marvel at the theater. Just for laughs, the crew had me try my hand at driving a jeepney to get us there.

There I was, with a bunch of kids in tow and Jonathan riding shotgun, while I navigated busy Philippines street traffic on our way to the theater. It was pretty cool to see the kids all stoked, and we ended up making a bunch of new friends in the process. 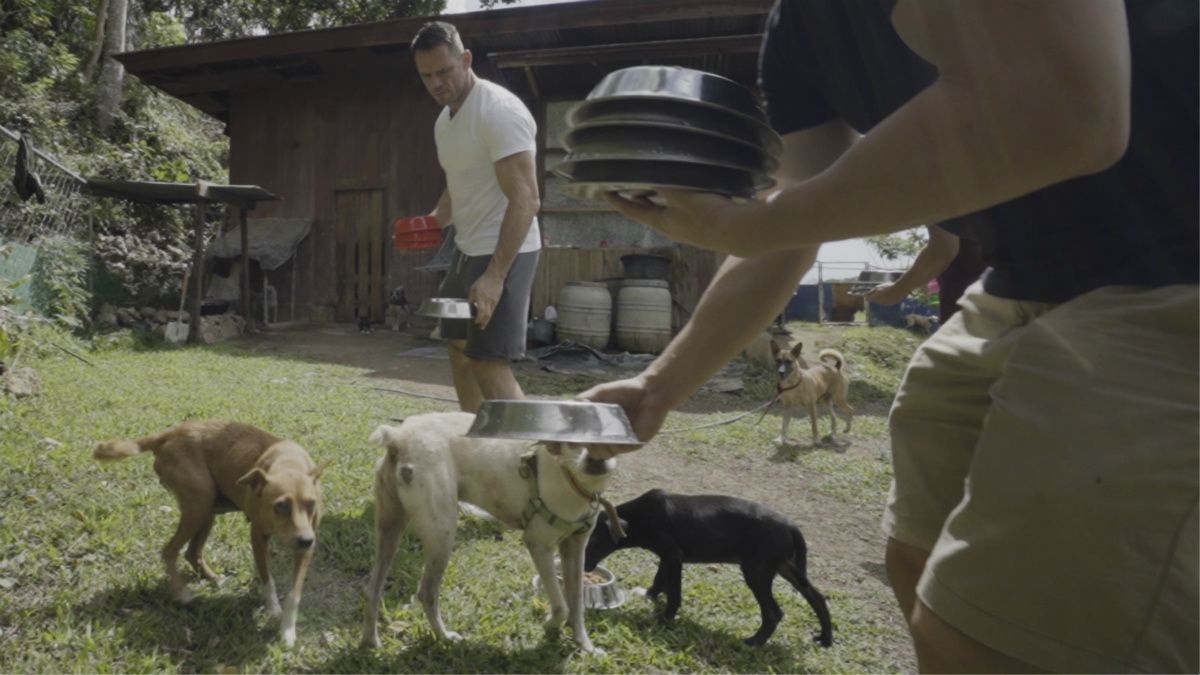 We also teamed up with another Cebu athlete and OWS 3 veteran Mark Cuizon to help out at Island Rescue Organization, which is a dog shelter in Danao City, Cebu.

A dog owner himself, Mark is passionate about animals, and we spent the day working with stray dogs. Many of these dogs who are picked up off the street are highly aggressive – they have either been abused, mistreated, or probably escaped.

The shelters play an integral part in domesticating these animals, and specialized behavioral training is needed to slowly ease these dogs into getting comfortable with human and social interactions.

While I wasn’t exactly qualified for any hands-on assignments, I did pick up a few tips from the trainers on how to properly interact with these dogs, which was a nice bonus.

As it happened, I also managed to get my workout done for the day by hauling a 25-kilogram bag of dog food on each shoulder to the shelter. Had I known my journey would require a trek up the mountain, I could have saved quite a bit of sweat and sore shoulders by making a few trips instead.

Nonetheless, knowing those dogs were well fed and taken care of is its own reward. 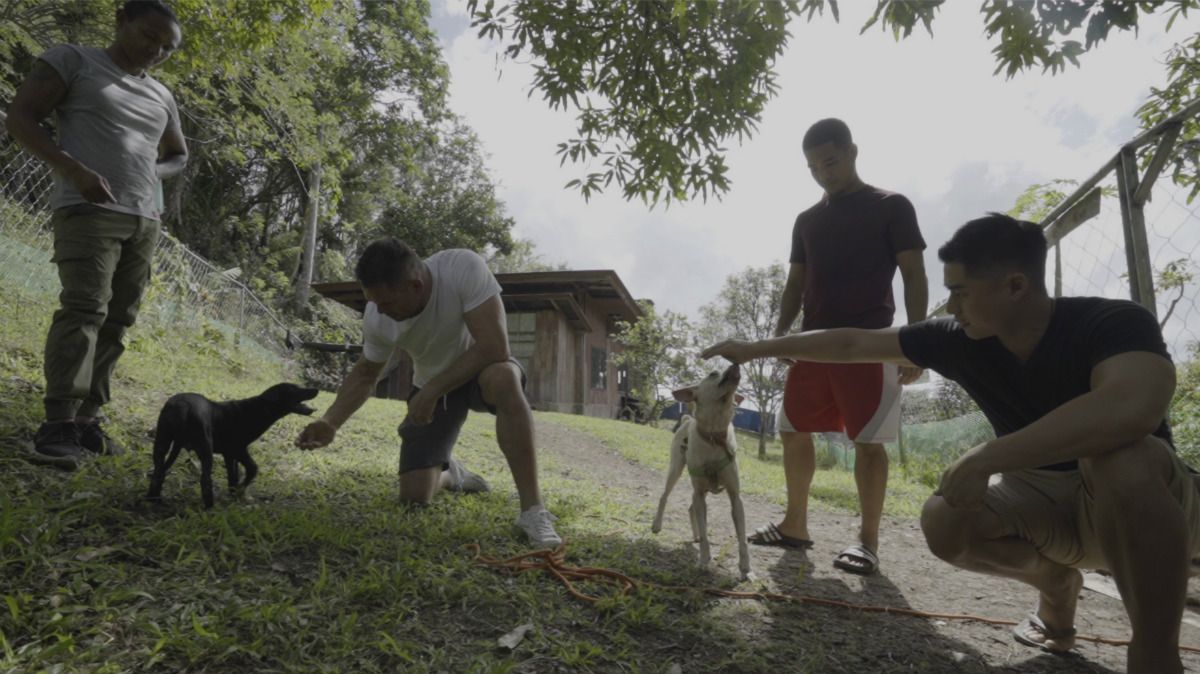 Every now and then, a good deed goes on to become a feel-good story, and this happened with us at OWS, too.

Let’s circle back to Season 4 during the Bali MMA tryouts when we met Indonesian prospect Toriq – an aspiring soccer player who made the transition to competitive mixed martial arts.

Years earlier, Toriq had tragically lost his younger sister to cerebral palsy. Seeing how her memory continues to motivate him, we thought it would be a fitting tribute to Toriq’s sister to take part in a yoga session with the kids from the Matahari Terbit Center – a school for children with physical disabilities.

We managed to hire a yoga instructor from a local school to lead the session and went to the store to pick up new yoga mats and other things for the kids. It was a pretty unique setting, being amongst all these kids – some curious, some enamored, and some just in their own element.

Of the kids who really took to our presence, it was a fun moment to just interact with them – and those yoga stretches definitely helped keep everything loose and light.

The instructor who was kind enough to help out admitted afterwards that the experience with the kids left her awash with positive emotions, so much that she felt compelled – on her own accord – to continue teaching the kids on a regular basis beyond our arrangement.

This simple act of paying it forward all ended up working out way better than we originally expected.

Just like so many other memories I have in our four seasons of filming, it has truly dawned upon me in reflection that my life in Asia has been a compilation of these unique, once-in-a-lifetime experiences.

As 2020 gets underway, I feel a sense of gratitude to have been a part of so many positive experiences.

When I spoke about hope earlier, it is more than wishful thinking, but conscious decisive action that truly sets positive things in motion. With that in mind, I can only expect greater things to come in the succeeding seasons from our team and our athletes.

Now that our content is finally getting airtime with broadcast partners, it is a great step forward and we are excited to show what we can do.