As she stepped out in front of her home audience in Kuala Lumpur, Malaysia, for her first ONE Championship bout, Jihin “Shadow Cat” Radzuan was nearly brought to tears.

The 19-year old prospect had dreamt of a moment just like this, but there was no way to prepare for what it would be like to actually walk out onto a stage with thousands of fans shouting her name at ONE: VISIONS OF VICTORY in March 2018.

Seconds before she stepped out onto the ramp and her tears were about to flow, Jihin remembered what her coach had told her backstage and forced herself to keep her composure for the biggest moment of her life.

“I was about to cry by that time but I always think about what my coach (former ONE athlete Melvin Yeoh) told me backstage, ‘Whatever you do, just don’t cry,’” Jihin says.

While “Shadow Cat” was one of her country’s hottest prospects and had plenty of competition experience, she had all the jitters that you might expect from competing in the world’s largest martial arts organization for the first time.

However, more than anything else, it was her sense of pride that heightened her emotions as she prepared to represent her people in front of the watching world.

“It was a huge stage, a huge stadium, and I was a bit nervous to walk down to the Circle,” she says.

“I managed it pretty well. I’m very proud to be Malaysian and to represent Malaysia. I’m the third female Malaysian fighter in ONE Championship. I was proud of that.”

Once she entered the Circle, Jihin was able to let the nerves melt away as she prepared for the battle ahead, even though it was an imposing challenge.

That night she faced off against Indian Puja “The Cyclone” Tomar, who had far more mixed martial arts experience, as well as a decorated wushu background that had seen her win dozens of bouts and a national title.

Jihin was confident she could prevail with a well-planned strategy, but she admits she was thrown off when she felt what Tomar was capable of.

“Me and my coach we were planning to be on the feet striking, but it’s not what we ended up doing,” she recalls.

“As people know, she’s good with side kicks and I was trying to avoid that strike from her. I tried to bring her to the ground and I tried to finish her with the armbar, but she’s strong. I was like, ‘Oh my god she’s strong!’” 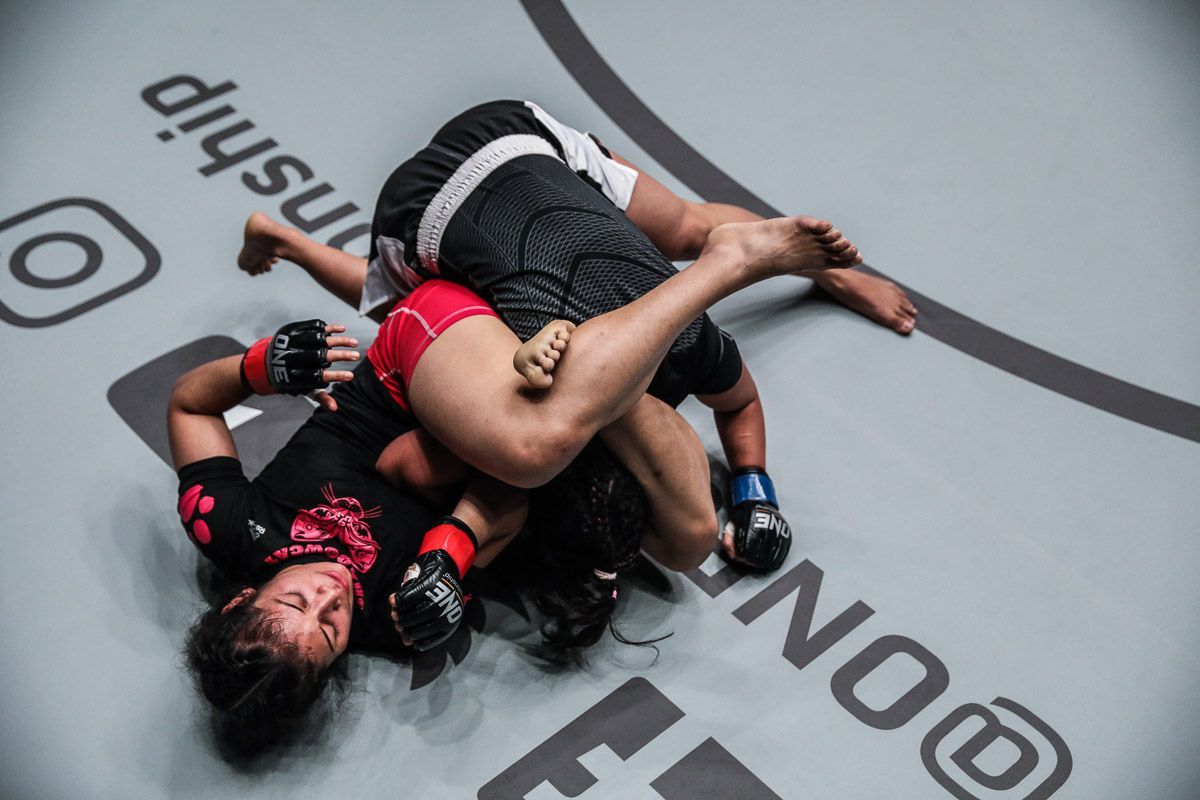 Despite her difficulties, Jihin stayed composed in her corner thanks to some more sound advice from her team from Ultimate MMA Academy in Johor Bahru between rounds.

She says Yeoh made her refocus on a new game plan on the fly and she showed maturity beyond her years and determination to adapt and ultimately get the finish halfway through the second stanza.

“He told me to go for the ground in the second round,” she says.

“When I trapped her with the triangle, I was like, I need to finish this. I didn’t want to go to the third round. I held it and she tapped.”

As soon as Tomar surrendered, the Axiata Arena erupted. As Jihin had her name announced as the winner, it looked like she was holding back tears, but this time they were of joy.

The Malaysian hero could not hide her emotions this time as she absorbed the love from her compatriots, but surprisingly, it was not long before she regained her focus.

In a split second on her way back out of the arena, Radzuan’s entire mindset changed. Instead of allowing herself to completely relax, she started to think about what went wrong and what she needed to improve upon before she stepped back into the Circle.

“I wasn’t really satisfied with my performance,” Radzuan admits.

“I think I could have done better. We knew it would be fixed in the next fight.”

That might seem a little harsh, but that is one of the reasons why she has continued to improve, and though she is still just 21, the “Shadow Cat” is already one of the top women’s athletes in The Home Of Martial Arts and an inspiration to her fans.