Sovannahry “The Sweet Savage” Em bounced back in a big way in her return to the ONE Championship Circle.

After more than a year on the sidelines following her first career loss, the Cambodian-American showed off impressive skills as she dominated Choi Jeong Yun en route to a second-round TKO at ONE: UNBREAKABLE II – a previously recorded event that aired from Singapore on Friday, 29 January. 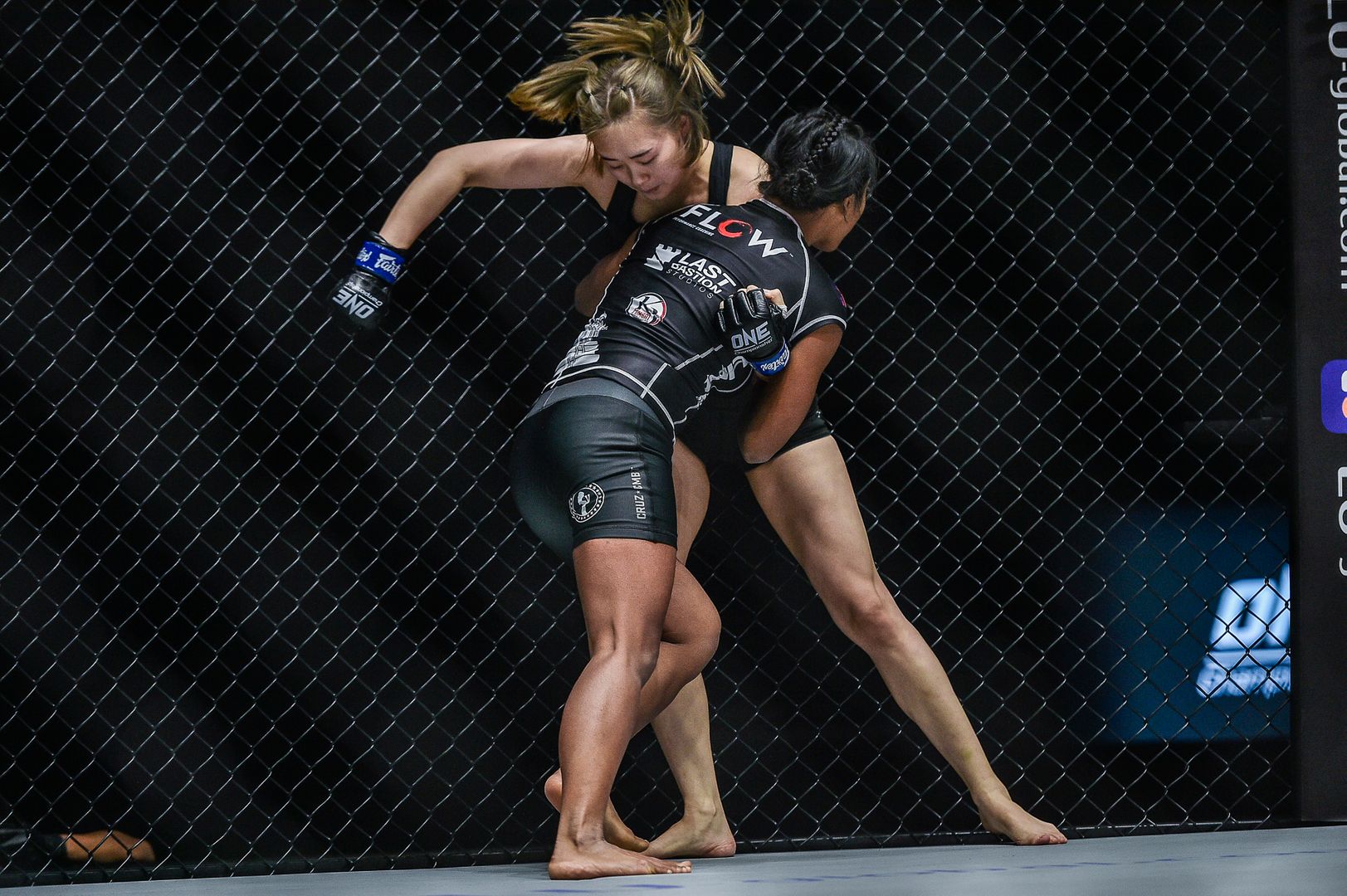 Em quickly made her intentions known in this 62.5-kilogram catch weight fight by rushing toward the South Korean from the opening bell.

Though she ate a knee from Choi, “The Sweet Savage” was successful in closing the distance as she pushed her foe to the Circle Wall and started to impose her will.

The majority of the first round was spent in that spot, with Em patiently trying to pursue a single-leg takedown while Choi tried to fend off the Fight Science MMA representative with short knees. 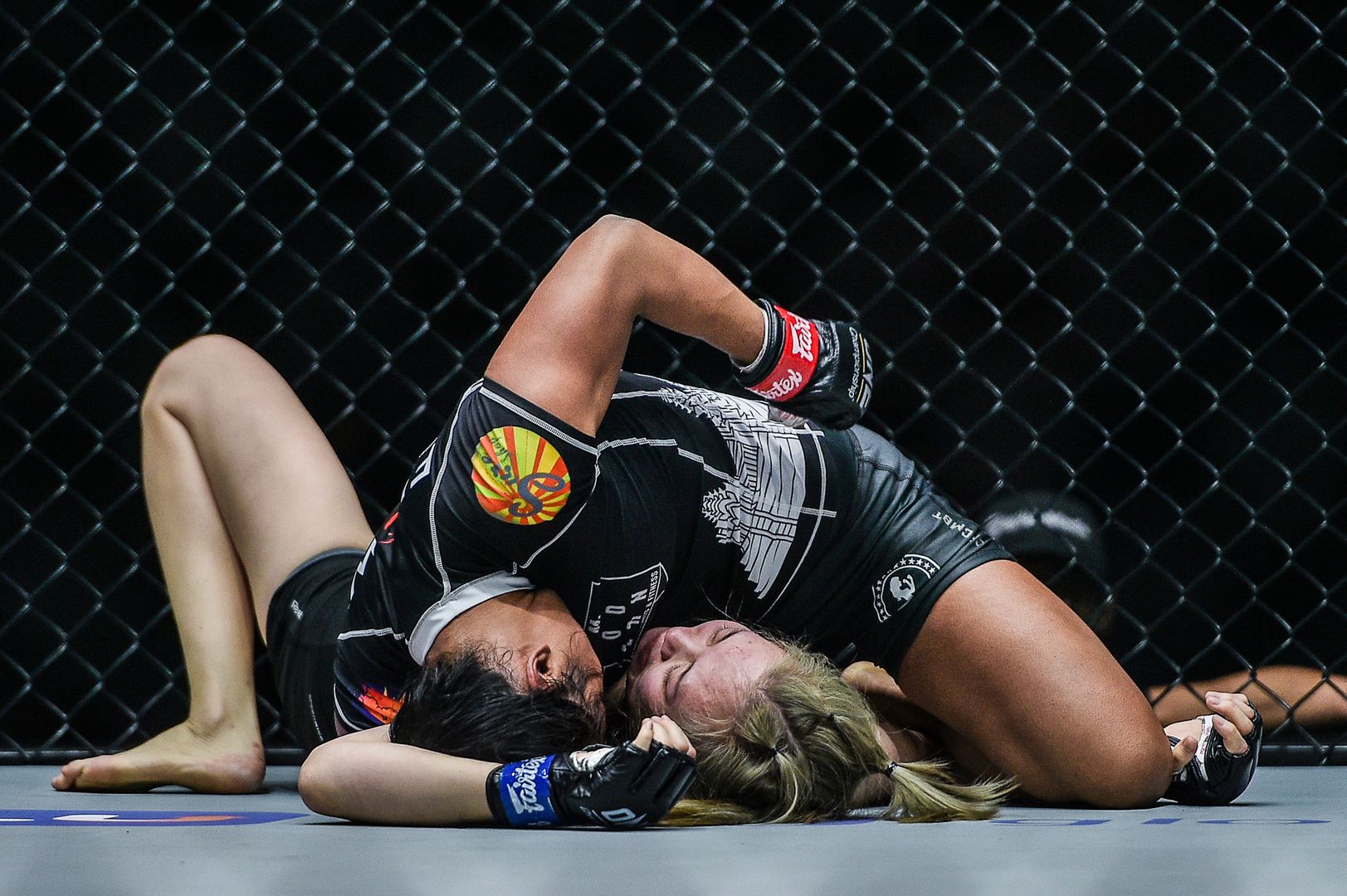 The deadlock was only broken when Choi unsuccessfully tried to surprise Em with a takedown of her own – something the wrestler in Em quickly capitalized on.

As soon as Choi made her move, Em countered effectively, getting the 22-year-old on her back for the first time, though Choi generally kept her guard closed and neutralized the Cambodian-American’s attempts to pass it.

Using the Circle Wall as leverage, Choi finally got back to her feet and even landed one more knee before the grinding round came to an end. 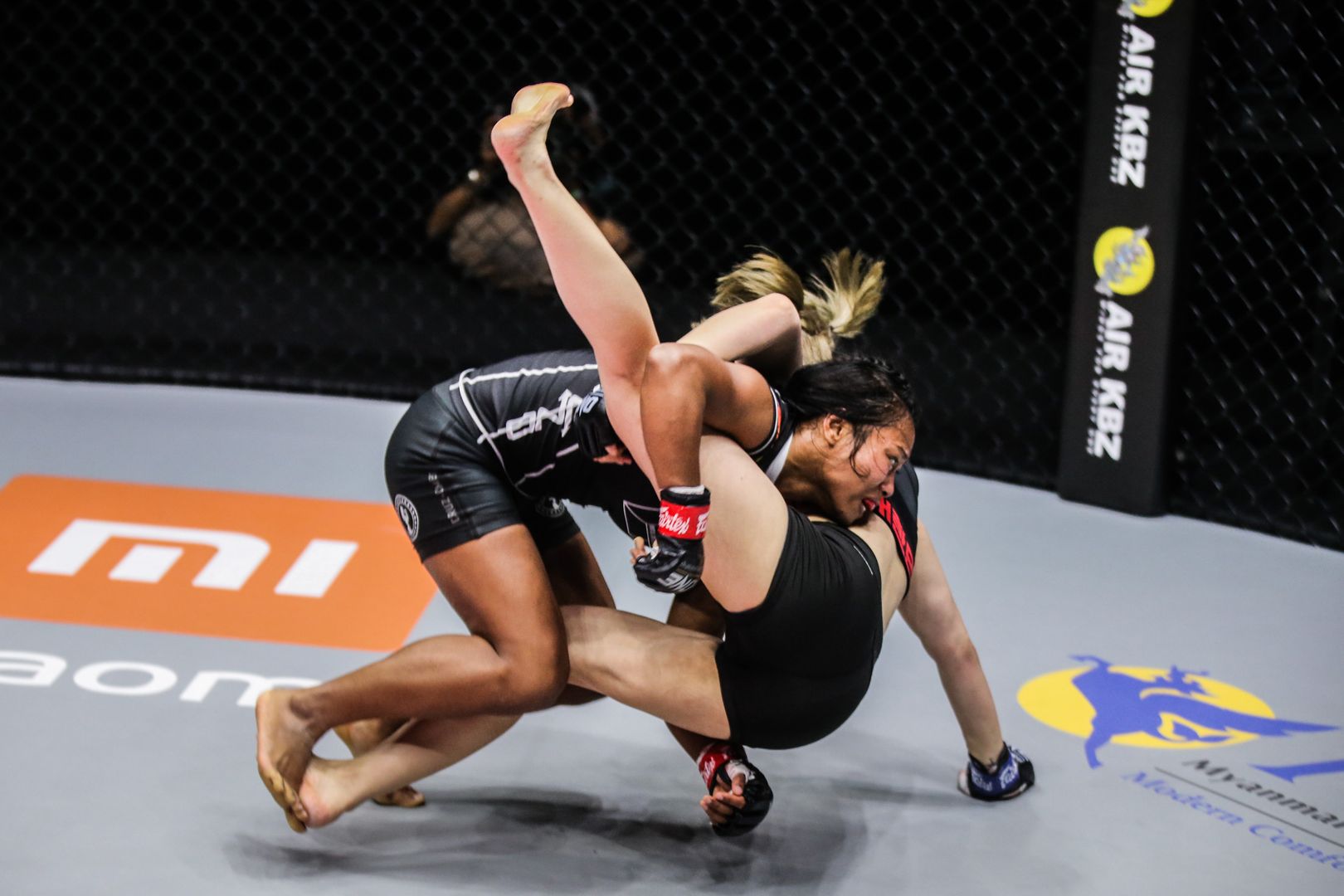 The second stanza started on a positive note for Choi, as she countered an overextending Em with a right cross, but that success was brief, as Em quickly pushed forward with a double-leg takedown and landed in side control.

“The Sweet Savage” tried to pass to full mount, but Choi would not be pushed over on the mat and got Em back into half guard.

Em was relentless, though. She attempted to go for a crucifix position before transitioning to an arm triangle. And when that didn’t work, she pushed Choi down and secured the full mount, where she landed punches and elbows. 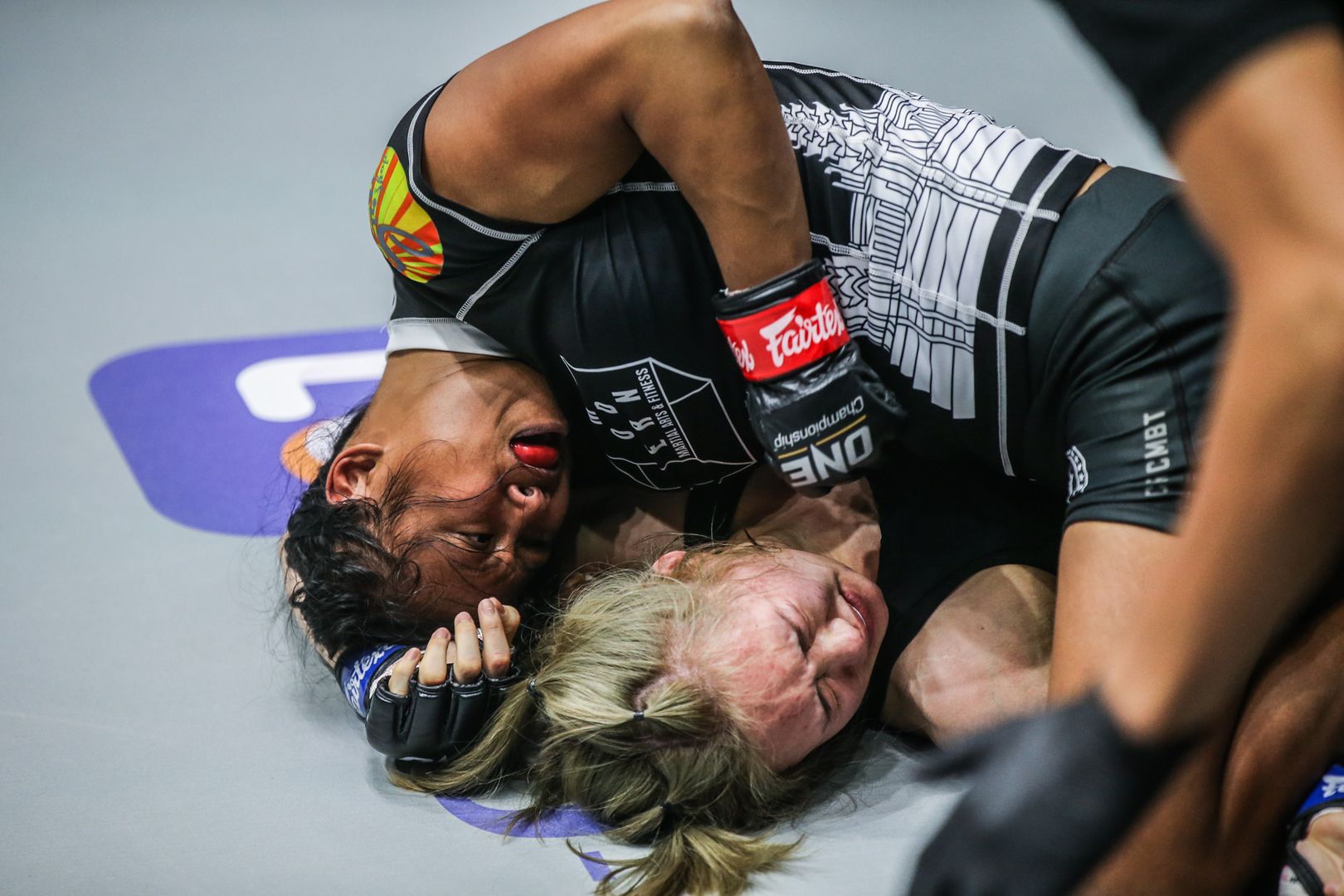 Choi showed a lot of guts by getting out of the precarious position once again, but Em scored another takedown just moments later.

This time, the grappling star would not let side control go to waste. Em trapped Choi’s right arm with her left leg while pinning her foe’s other arm with her head, which opened up the opportunity to land freely on the South Korean’s face.

At the 2:51 mark of the second round, referee Mohamed Sulaiman had seen enough and stopped the bout, giving Em a well-deserved win in her blossoming ONE Championship career. 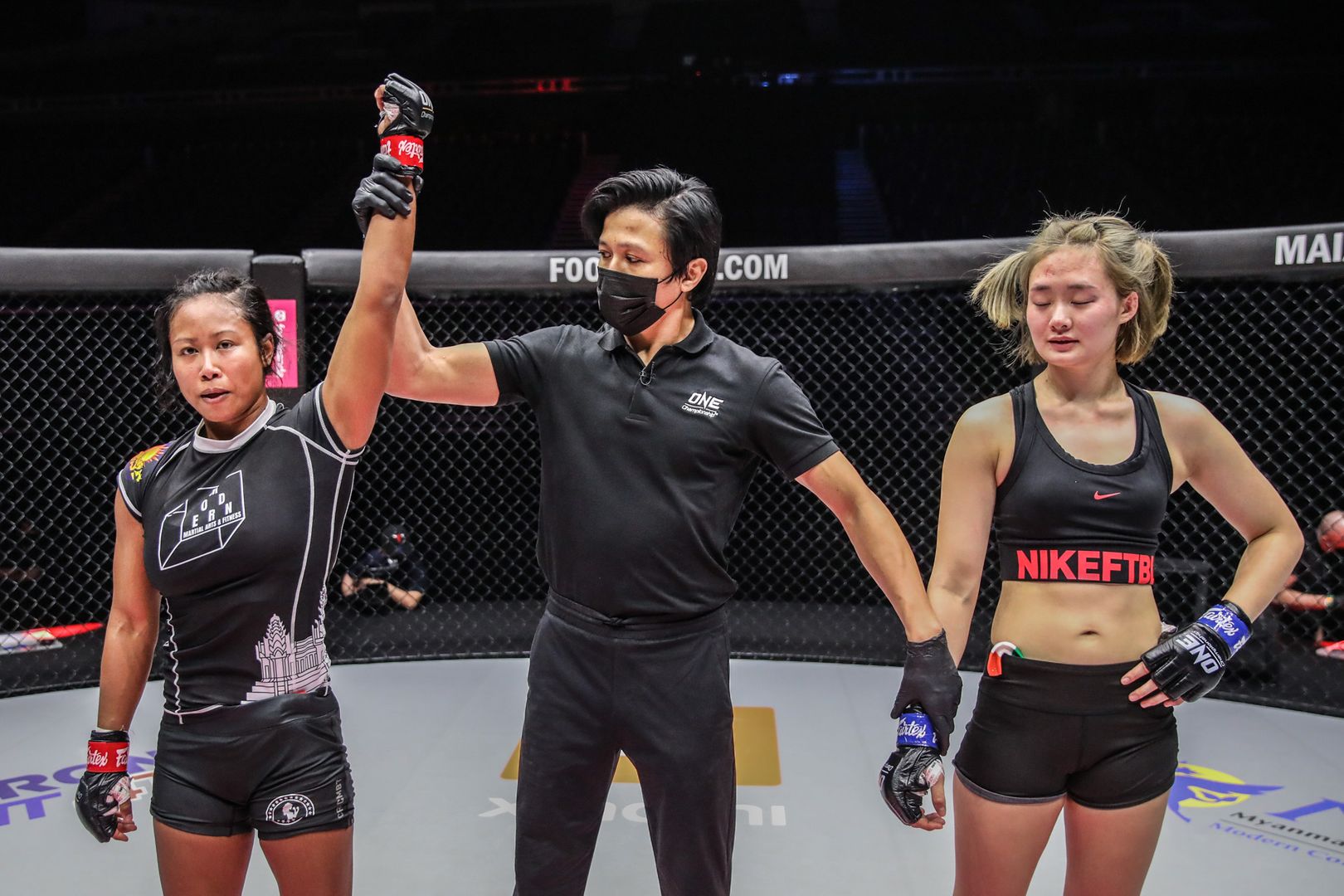