Alyona Rassohyna picked up a massive win in her ONE Championship debut, as she finished #5-ranked contender Stamp Fairtex in the dying stages of their atomweight mixed martial arts contest at ONE: UNBREAKABLE III, which aired on Friday, 5 February.

Rassohyna locked in a guillotine choke in the final seconds of the third round to claim an astonishing come-from-behind victory and hand the Thai superstar her first career defeat in the sport. 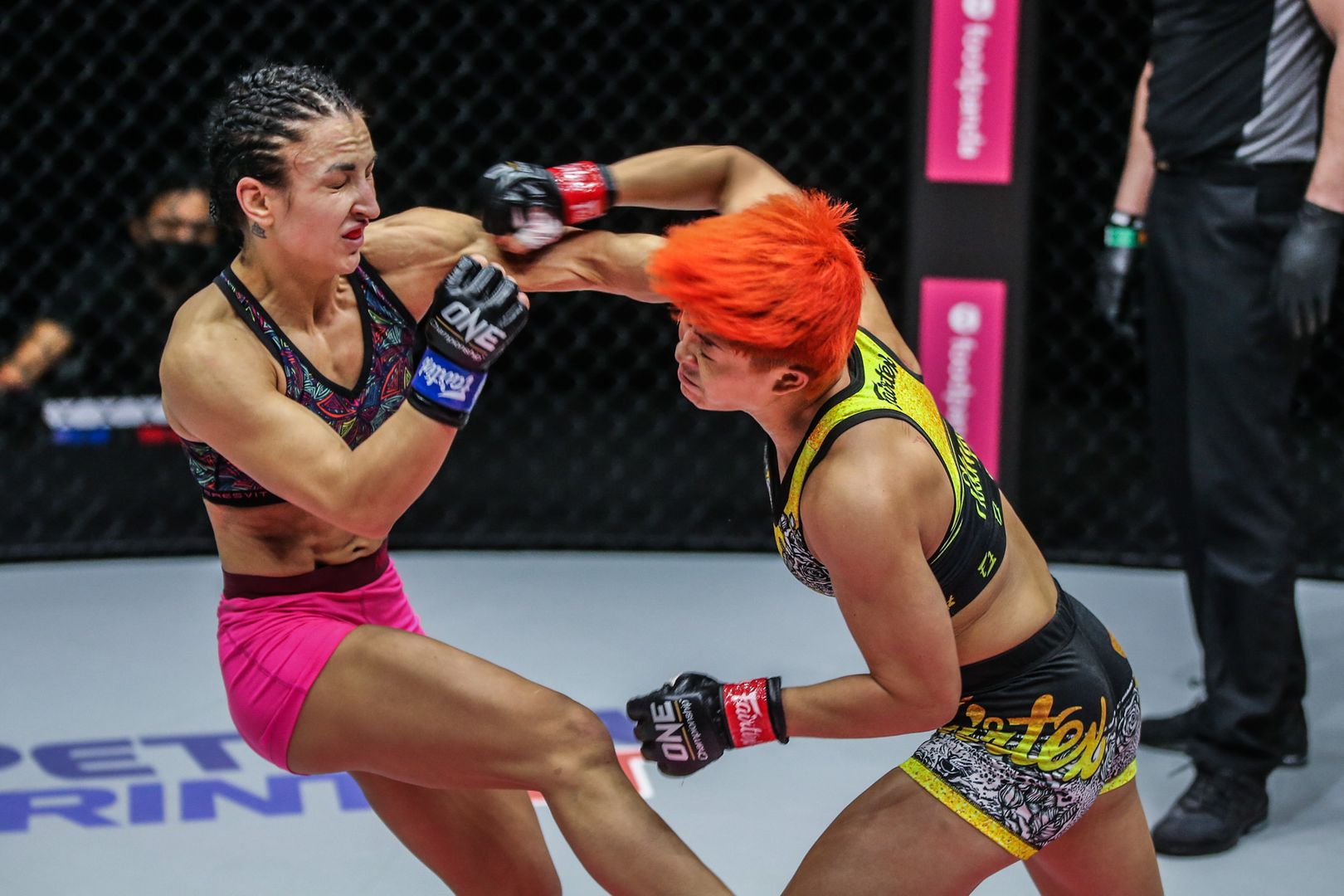 The Fairtex fighter, who previously held ONE World Titles in both Muay Thai and kickboxing, set her stall out early with a hard low kick.

As the Ukrainian tried to fire back with one of her own, Stamp responded with a thudding right hand. And when the Thai attempted her next low kick, Rassohyna spotted an opportunity for a takedown – but it did not go to plan.

First, Stamp avoided a leg lock attempt to take top position. From there, she moved from side control to mount, and then to back control. The former two-sport queen kept her rival tied up until the Yarost Gym representative eventually freed herself.

Soon after, there was a tense moment for Stamp when her famed arm-collecting opponent came close with a trademark armbar, but the Pattaya resident defended well and got back to her feet.

The Fairtex product got taken down again but showed her improving ground skills by scrambling back up, where she planted her foe with a hard right elbow before the end of the frame. 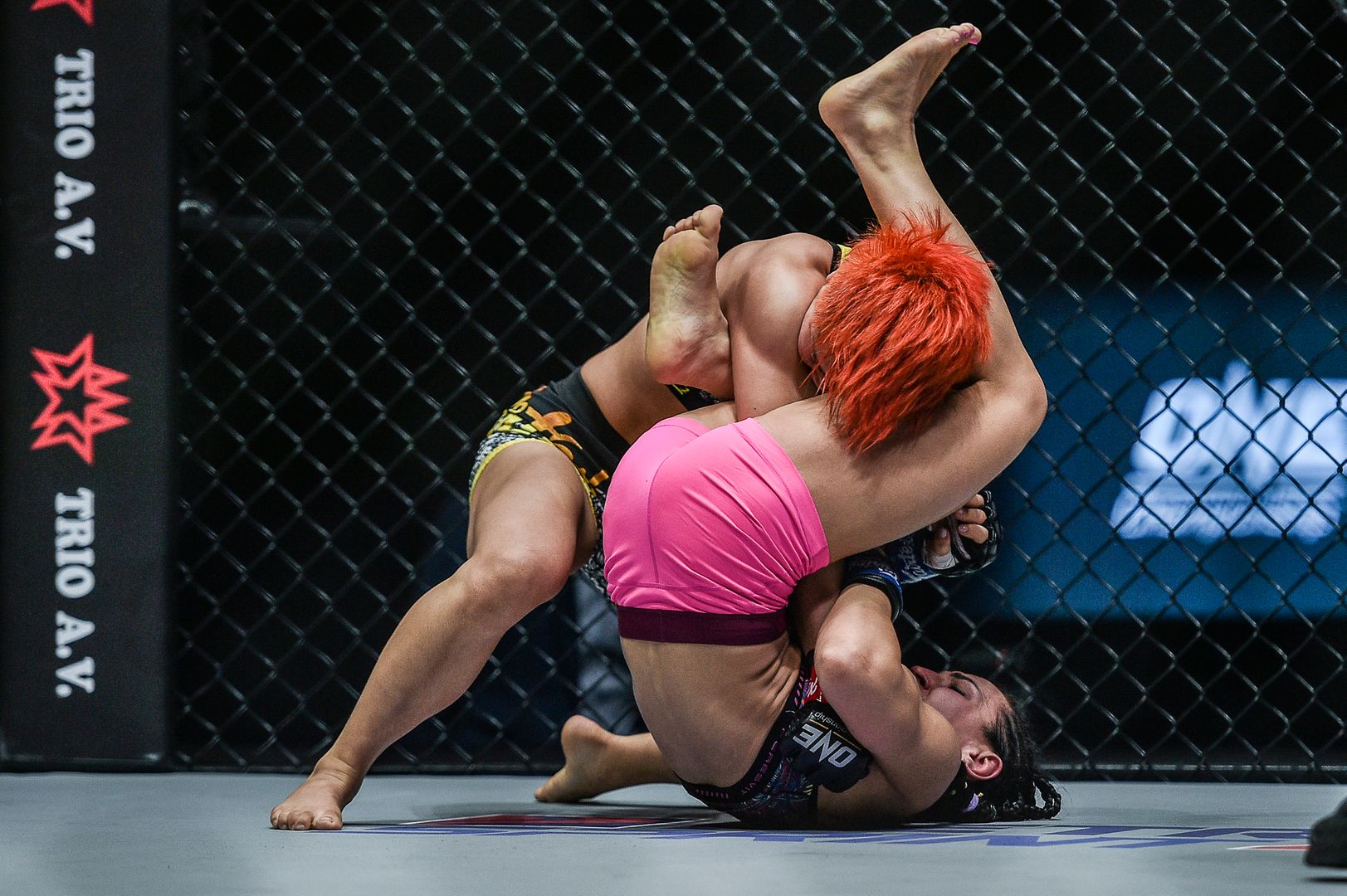 Rassohyna showed that her hands had to be respected at the start of round two, as she caught Stamp with a stinging cross-hook. But the Muay Thai specialist found her rhythm with counter strikes and drilled the Ukrainian with hard right hands in reply to her low kick attempts.

The moment of the round then came when Stamp expertly defended Rassohyna’s single-leg takedown attempt, smashed a right elbow into her rival’s temple, and took the back in the ensuing scramble.

However, the Dnipro native found a way out and then looked for another armbar. Stamp defended well and backed out to her feet, where she landed a crunching left hook that stunned the Ukrainian. 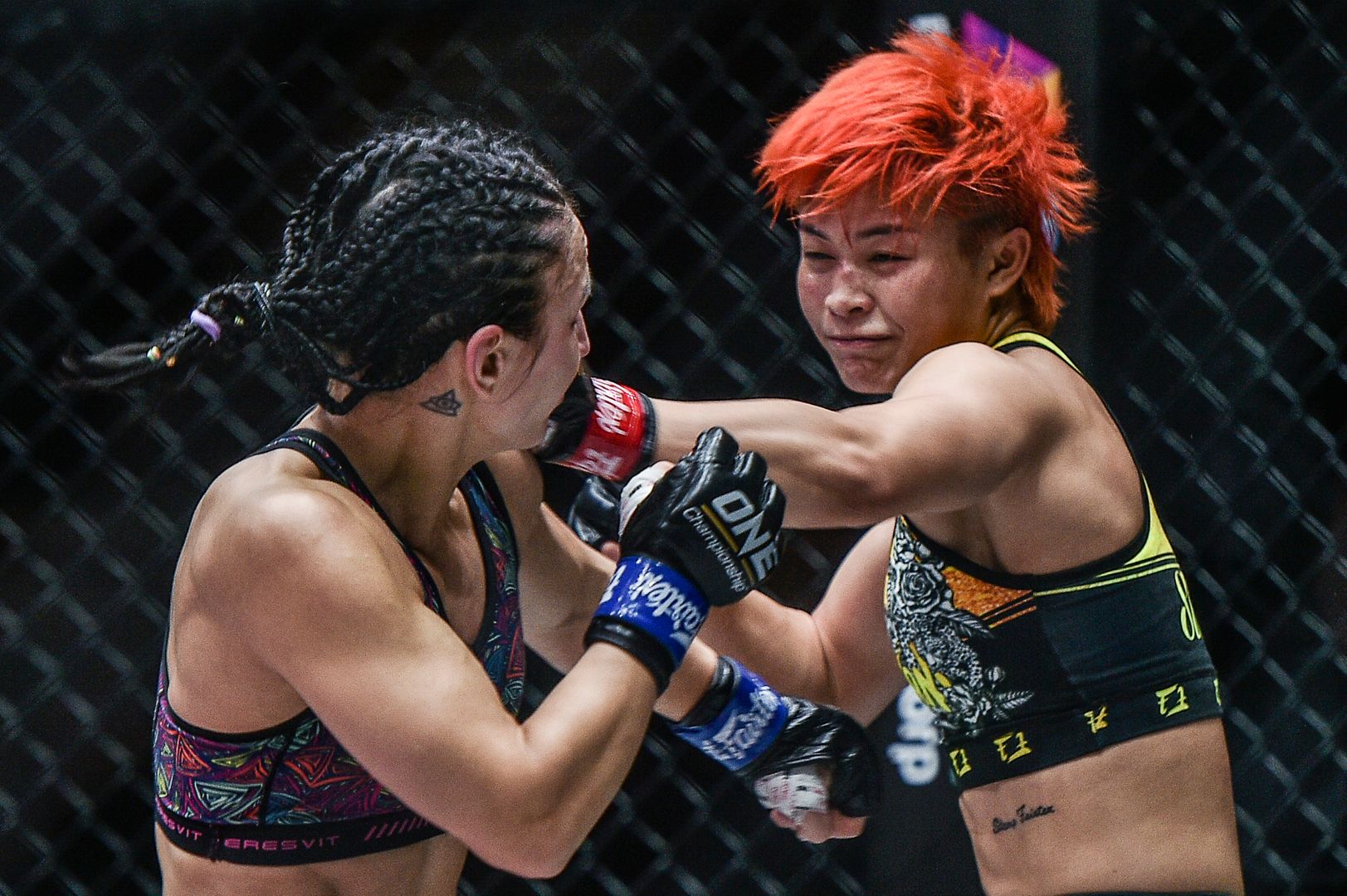 With only five minutes remaining in the main event clash, Stamp appeared to be edging ahead on the scorecards.

The pair swapped jabs, but the Thai’s cross and low kick were the first hard strikes of the round. Rassohyna found a home for her jarring lead hook, only for the Fairtex athlete to reply with chopping right hands.

Stamp would keep her European foe off with her jab until the final minute when Rassohyna entered with a double-leg takedown attempt and then tripped the striker to the canvas.

The Ukrainian tried to punch and pass, and Stamp saw it as her chance to escape. She grabbed an underhook to get back up, but Rassohyna instinctively jumped on a guillotine choke that swung the fight in her favor.

Rassohyna squeezed with all her might to find the finish, and she got it as referee Olivier Coste dived in with just seconds to spare in the match. 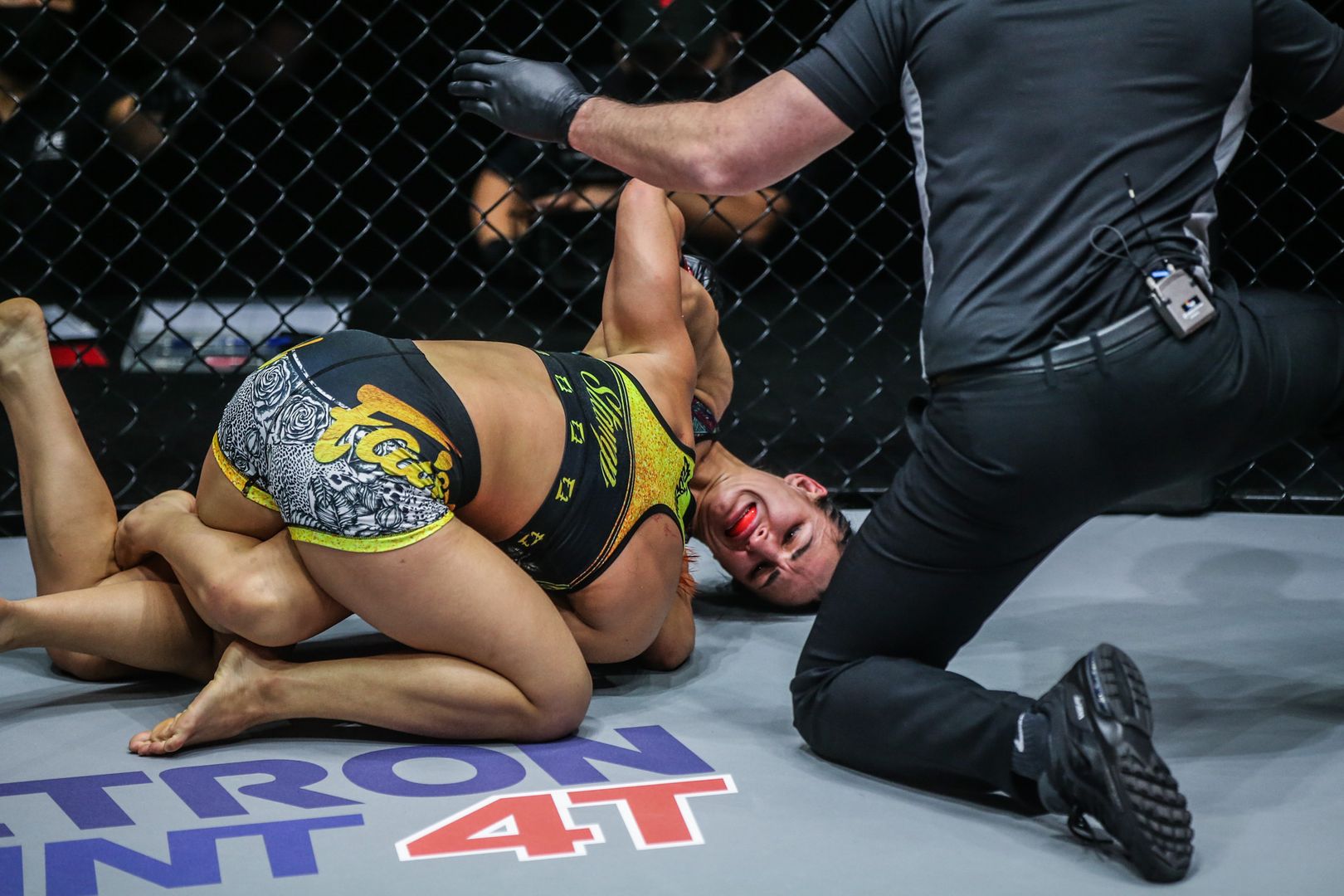 Coste had reacted to Stamp’s left hand seemingly tapping her opponent’s back. The Thai star protested the stoppage and claimed that wasn’t her intention, but the decision stood at 4:53 of the third and final frame.

With the massive submission win – the 11th of her career – Rassohyna pushed her record to 13-4, announced herself as a force in the atomweight mixed martial arts division, and showed that it’s not over until the final bell rings. 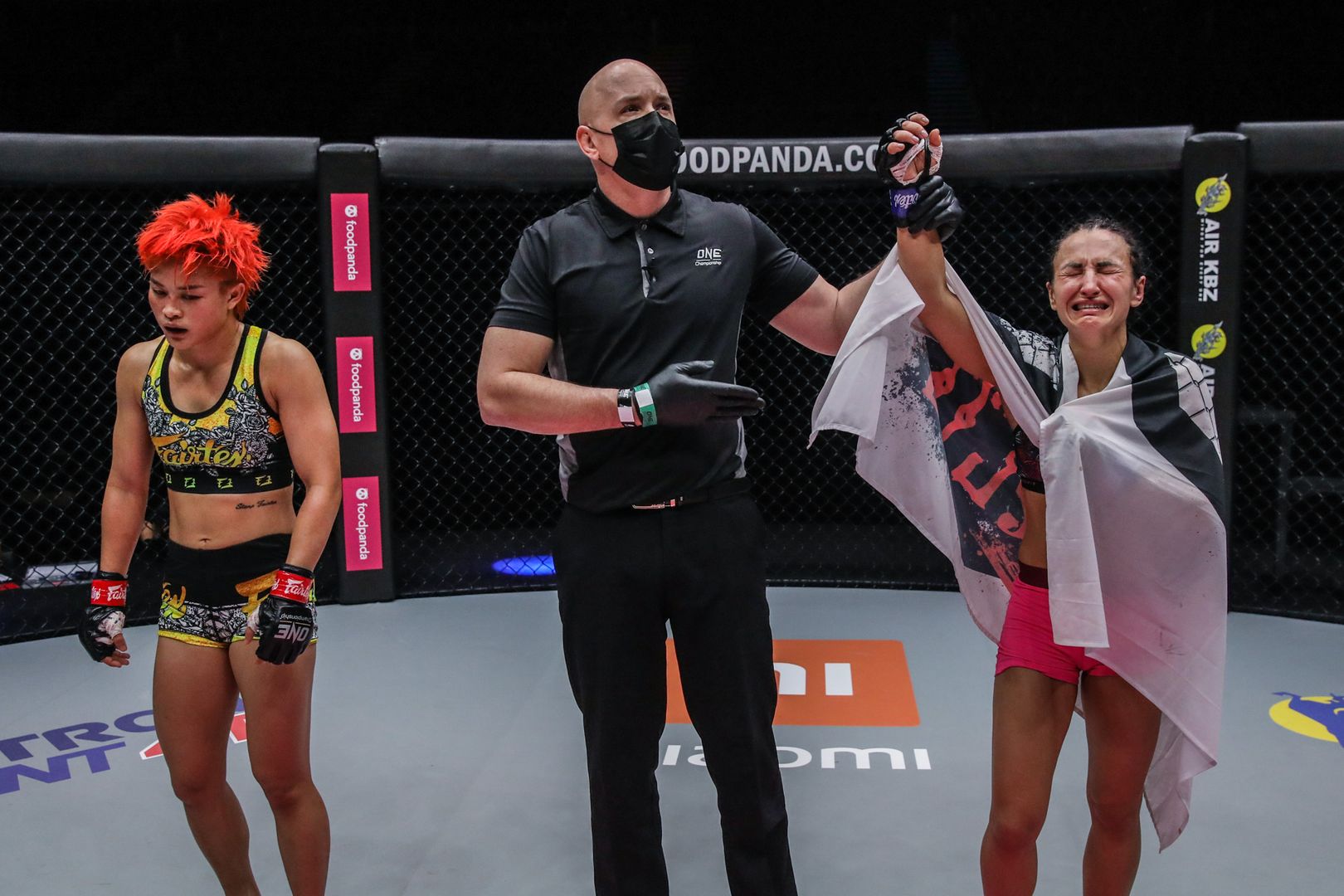