“Killer Bee” Kai Ting Chuang has defied the odds her entire life, and on Saturday, 7 July, she did it once again.

The 23-year-old defeated multi-time Muay Thai World Champion Yodcherry Sityodtong via unanimous decision in the main event of ONE: BATTLE FOR THE HEAVENS. In doing so, she captured the inaugural ONE Super Series Kickboxing Atomweight World Championship.

In addition to claiming the coveted belt inside China’s Guangzhou Tianhe Gymnasium, she also made history as the first female titleholder in ONE Super Series.

“I went over this match with my coaches, and we came up with a great game plan, which worked out perfectly,” Chuang said in the post-bout interview with Mitch Chilson.

“Thank you to all the fans who supported me, and especially my team who helped me in preparing for this match.”

In the opening round, Chuang immediately pushed forward and threw a myriad of punches, which she continued to do throughout the duration of the bout.

Yodcherry, however, tagged “Killer Bee” with a heavy right hand, followed by a roundhouse kick, which she unloaded occasionally during the clash. However, Chuang punctuated the round with a huge left hook and backed up Yodcherry against the ropes.

Every minute, it seemed as if “Killer Bee” was gaining more and more confidence.

She immediately utilized her hooks to start the second frame, and at the halfway point, both athletes turned up the heat. Chuang continued to fearlessly move forward, and applied pressure on the teenage phenom, who resorted to her Muay Thai clinch when the two got tangled up on the inside – however, the kickboxing rule set meant she could not use it in the way she wanted. 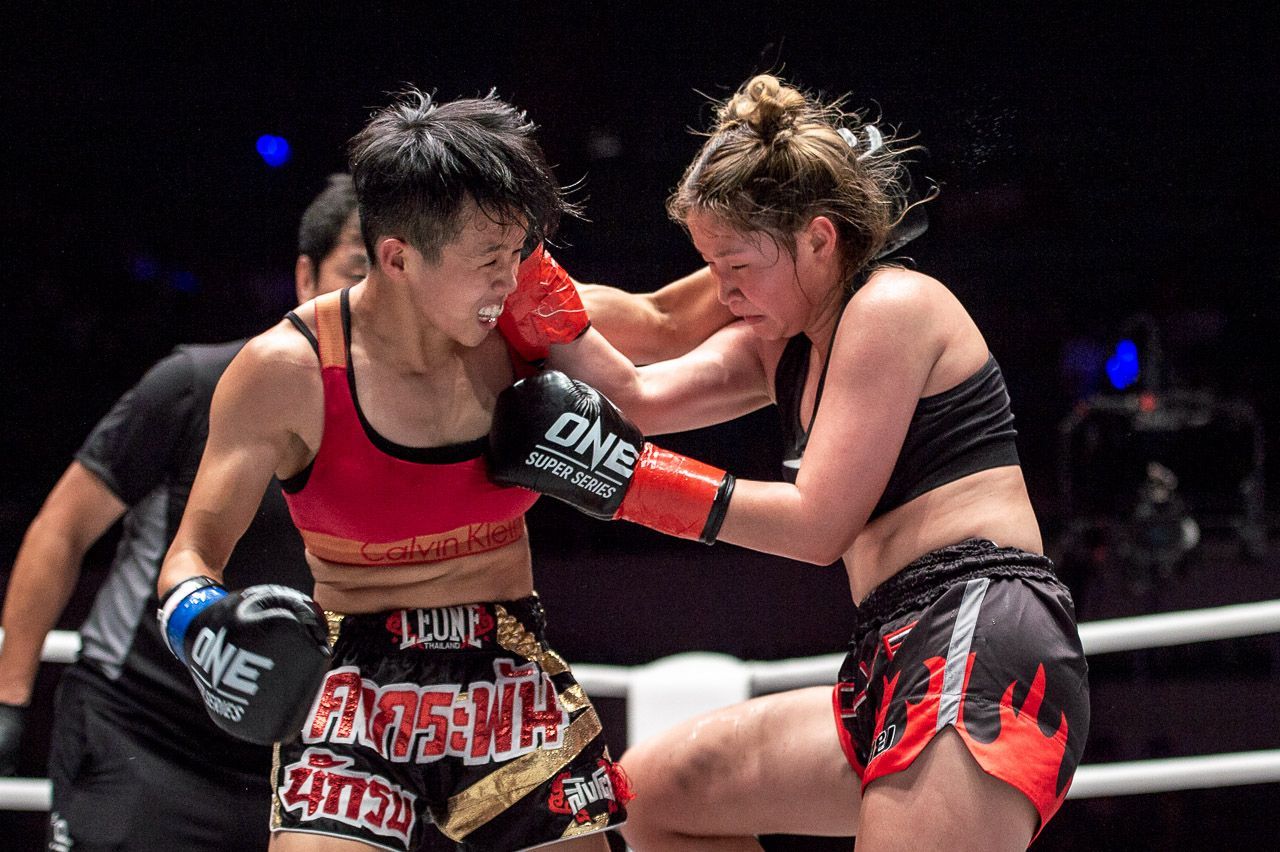 The aggression carried over into the third, and this is when Chuang’s overall activity was evident. She continued to push the pace, and remained busy with her strikes. Yodcherry operated off the back foot and circled away from her adversary’s flurries, all while opting to counter with single shots.

In the championship rounds, there was a growing sense of urgency coming from Yodcherry’s corner, as the Muay Thai World Champion needed a solid performance in the last two stanzas in order to sway the judges in her favor.

An intense “Killer Bee” was having absolutely none of it — she continued to dictate the pace and close the distance with her tenacity.’

After five rounds of action, all three judges awarded the victory — and the inaugural ONE Super Series Kickboxing Atomweight World Championship — to Chuang.

With the victory, “Killer Bee” scores a monumental accolade. She defied the odds, and realized a dream she has had ever since she first got involved in the martial arts as a 16-year-old girl.

Chuang, who was abandoned in an orphanage by her parents when she was a baby, originally learned boxing as a way to get a scholarship, and help alleviate her grandmother’s financial stress of raising her.

Now, she is a ONE Super Series World Champion with a future that is brighter than ever.