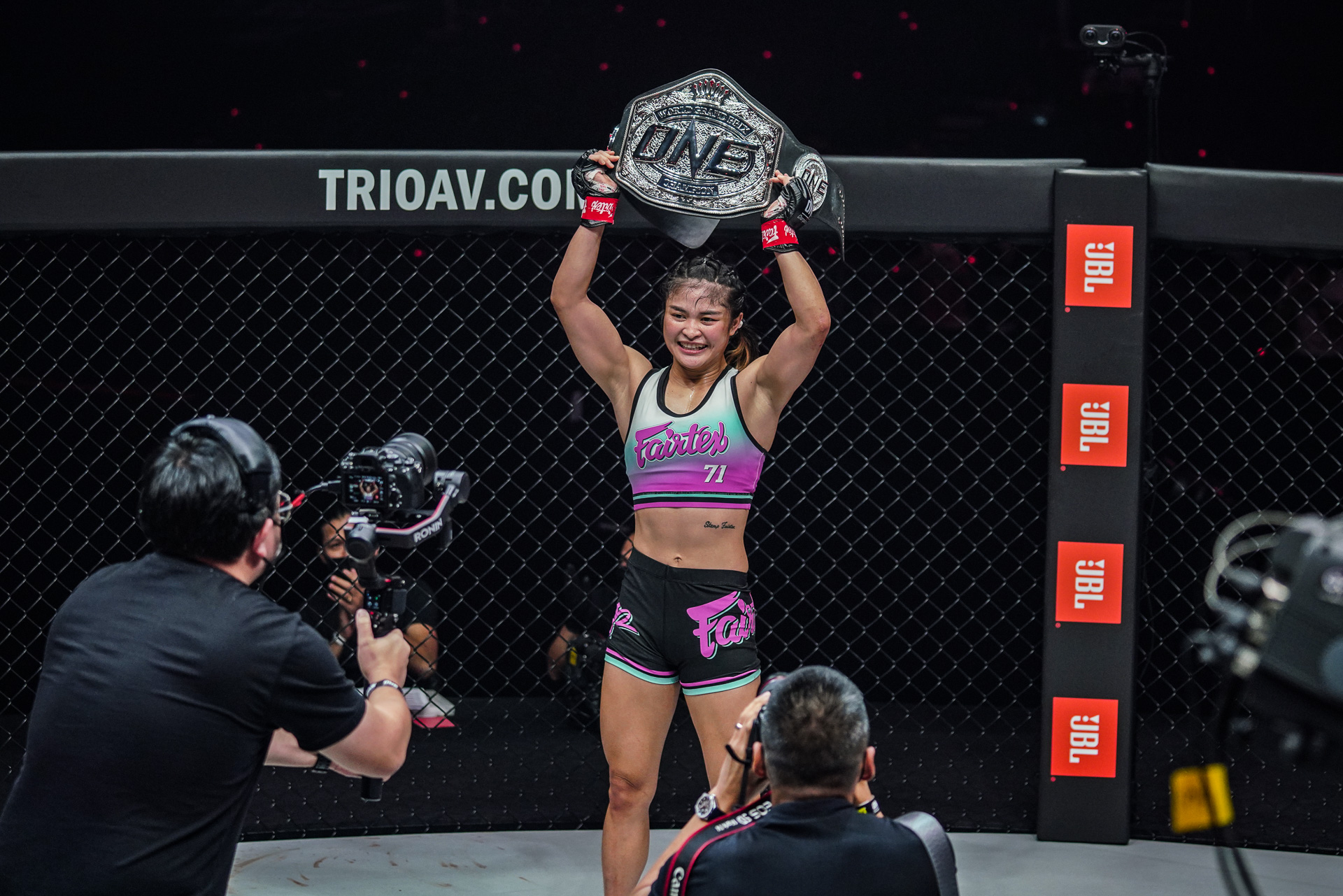 Stamp Fairtex has made no secret that she greatly admires “Unstoppable” Angela Lee, and now, she will meet the longtime atomweight queen in the Circle.

It’s a chance to reach new heights in her mixed martial arts career, but Stamp won’t be overawed by the occasion.

Instead, she vows to produce a strong performance at the Singapore Indoor Stadium against the division’s “Unstoppable” force.

The 24-year-old told ONE Championship:

“I see and praise [Lee] as my idol because of her fighting style and how determined she is. She is a different person in the ring. Out of the ring, she is a cheerful and friendly person, but once she gets in the cage, there is no giving up, no more being friendly. Up there, she is the true fighter.

“I see it as such an honor to fight her, and I’m really glad that once in my life I get to fight my idol. I see myself as an underdog but I am now ready to get in the Circle and fight Angela Lee for the belt, and I will give my best attempt.”

Ever since Stamp transitioned to MMA, she’s followed Lee’s career with great interest – watching as the Singaporean-American won the inaugural atomweight belt in 2016 and then racked up four successful defenses.

But now, the #1-ranked contender has a chance to make history at ONE X.

Stamp previously held the promotion’s Kickboxing and Muay Thai World Titles, and she can become an unprecedented three-sport ONE World Champion by adding the MMA gold to her resume.

While she respects “Unstoppable,” the Fairtex star thinks the atomweight division is due for a major shake-up.

“My first goal was to achieve the kickboxing belt, followed by the Muay Thai belt. And I would also like to be the MMA Champion, for which I need to beat Angela Lee. It’s only a step away for me to win the MMA belt then I will be the only one in history to own belts in three sports.

“It’s been so long that Angela Lee has held her championship that it’s getting boring in the weight class. It’s time for a change. It’s time for a new champion. I’ll be the new ‘Unstoppable.’”

Stamp Fairtex holds Angela Lee in the highest regard, but she doesn’t view their matchup as an insurmountable task. And though “Unstoppable” has never lost at atomweight, the Thai striker thinks her World Title challenge is coming at the perfect time.

For starters, the Fairtex star will bring plenty of momentum into ONE X, with three straight wins and the ONE Women’s Atomweight World Grand Prix silver belt. Meanwhile, Lee has not competed since October 2019 due to her pregnancy and the birth of her first child.

Stamp has fought nine times since then, and she thinks the relatively new mother will struggle to readjust to the chaos and intensity of combat.

“Of course, Angela Lee hasn’t been in the Circle for about two years. Nothing would stay the same. I have an upper hand from my fitness and readiness.

“I personally think that when Angela Lee got pregnant, her body stopped functioning for fighting for two years. This is like a new beginning for her body in every aspect. For training and strength, I think those will be decreased, but I think her skills are still intact.”

Knowing “Unstoppable” has spent so much time on the sidelines, the Fairtex athlete feels confident that she can push her into the championship rounds – where she predicts the United MMA and Evolve MMA star will struggle to stay afloat.

Feeling fresh, fit, and more motivated than ever, Stamp is determined to push the pace until the defending ONE Women’s Atomweight World Champion drowns.

“I think Angela Lee will try to drag me down to work her ground game, which is what she does really well. But it’s also a drawback for her because her strength is not that high now. After taking me down, she will try to submit me as soon as possible because, if she tries to control me, it would be a waste of her energy.

“I plan to keep my distance with my footwork, punching, and kicking. The longer I can hold her off, the more she’ll get exhausted. My plan is to take my time and perform each strike as heavy as possible. I’ll let her drain herself out. Once I see she can’t take it anymore, I’ll get closer and finish her off.”