A glut of striking superstars are set to join ONE Super Series in 2019, but it will take something special for any of them to make a more impressive debut than Elias “The Sniper” Mahmoudi.

The three-time Muay Thai World Champion from Algeria put on a martial arts clinic as he dismantled Japan’s Yukinori Ogasawara over three rounds at ONE: HERO’S ASCENT.

The match was a captivating end to the prelims, which delivered non-stop action at the Mall Of Asia Arena in Manila, Philippines on Friday, 25 January.

Mahmoudi had a spectacular start to the flyweight contest, as he used his long limbs to connect with front kicks to the face.

He followed up with straight punches, which all seemed to find their mark. Then, he clinched up with his opponent, where he displayed a clear strength advantage and attacked with knees.

Even when Ogasawara escaped his opponent’s clutches, there was no reprieve, as “The Sniper” closed the distance again to land a variety of elbows. His strikes in combination kept on coming, as roundhouse kicks and spinning attacks kept the WBC Japan Muay Thai Champion on the back foot.

Before the bell to end the first three minutes sounded, Mahmoudi had Ogasawara on the canvas after connecting with a leg kick, elbow, and knee combination. A knockdown was not called by the referee, however. The relentless round ended with more elbows from the Algerian.

There was no let up in the second frame, and Ogasawara was on the mat again as a straight right hand landed clean. This time, the 26-year-old Japanese athlete had to face the official’s count, but he was able to continue.

Once the action restarted, Ogasawara continued to stand right in front of Mahmoudi, and he could do little more than cover up as a barrage of punches and elbows came his way.

When they clinched up, the 21-year-old Algerian continued to show an overwhelming strength advantage by tossing his rival around at will.

By the start of the third and final round, Mahmoudi showed no signs of fatigue and continued to throw everything in his arsenal at his opponent. 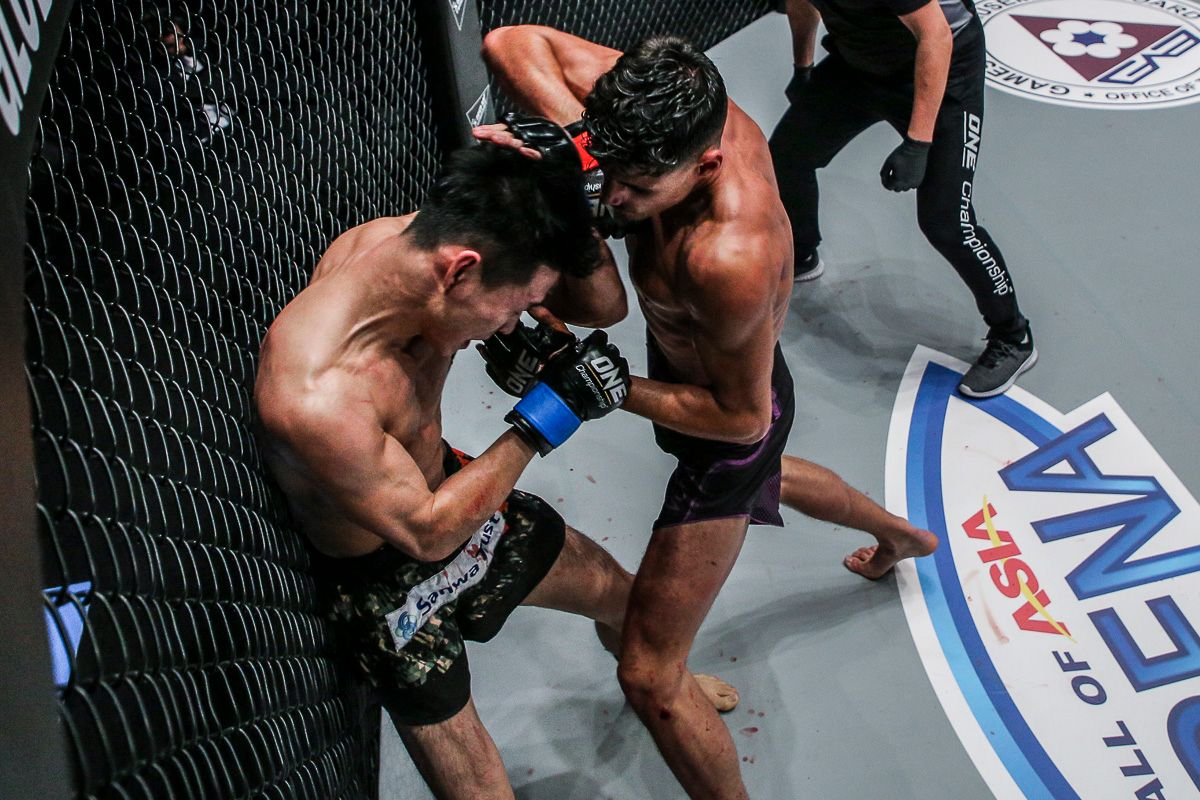 Ogasawara responded as the match entered the final minute by going for broke and standing toe-to-toe in search of a shocking comeback finish.

Mahmoudi only increased his output, and he connected with the harder and more accurate strikes.

When the final bell sounded, there was no doubt whose hand would be raised, and sure enough, “The Sniper” earned a unanimous decision from the three judges at cageside.

In victory, he improved his record to 30-3, and marked himself as one of the most exciting talents to watch in ONE Championship’s all-striking league this year.